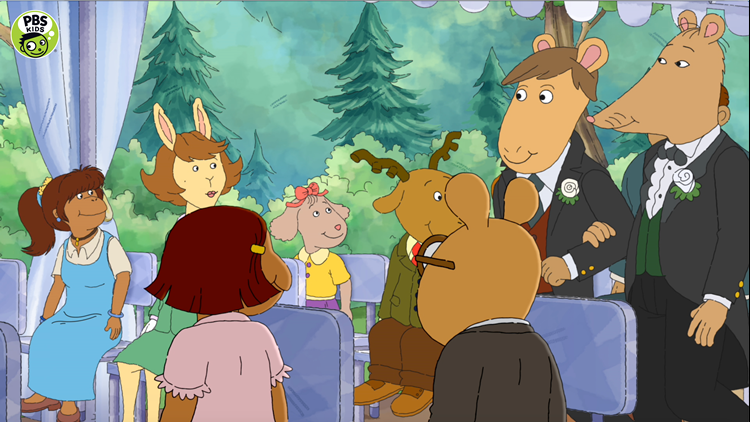 Photo by: 2019 WGBH and PBS KIDS
In the premiere episode of "Arthur's" 22nd season, "Mr. Ratburn and the Special Someone," Mr. Ratburn comes out as gay during his wedding.

Mr. Ratburn comes out as gay in 'Arthur' season premiere

TVLine reported Monday's premiere episode of the series' 22nd season, "Mr. Ratburn and the Special Someone," features Arthur and the gang shocked to learn their teacher is engaged.

This is because, of course, most kids think their teachers don't have lives outside of school. "When they go home, they sharpen pencils, eat kale and dream up homework assignments," Buster says in the episode.

The group later finds Mr. Ratburn having lunch with another rat-like character, voiced by Jane Lynch, and decide her comments toward their teacher -- he needs to "toughen up" -- are enough that him marrying her would just be so awful.

It turns out she's just his sister who wants the best for him.

Arthur and his pals show up at the wedding to object, but they quickly realize who Mr. Ratburn is marrying.

People on Twitter celebrated at the news, quickly making the topic "Mr. Ratburn" one of the Top 5 in the U.S.

"PBS KIDS programs are designed to reflect the diversity of communities across the nation," PBS said in a statement. "We believe it is important to represent the wide array of adults in the lives of children who look to PBS KIDS every day."

TVLine found it's not the first time Arthur's world has featured a gay character. A 2005 episode of "Postcards From Buster" featured children whose parents were lesbian.

The full episode can be watched on PBS Kids' website.