Modern-day cowboy | Why your family should giddy up to Love Valley, N.C.

The tiny town in Iredell County has more than just a car-free Main Street and an arena for rodeos. There are thousands of acres of private land where owners let visitors ride the trails on horseback 365 days a year at no charge. 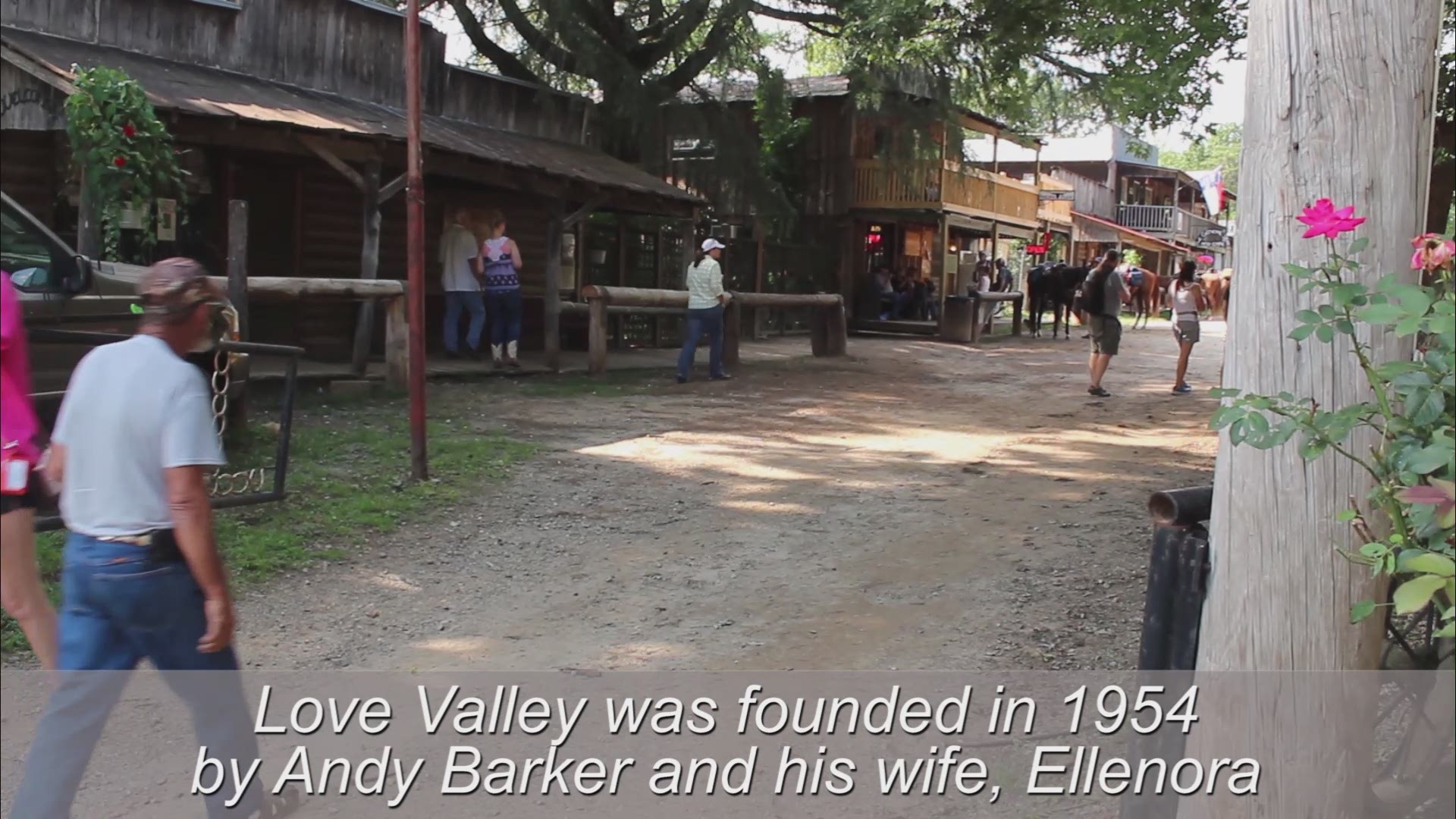 LOVE VALLEY, N.C. — A long time ago, say 64 years, a young man left the city of Charlotte for peace of mind and a piece of land in Iredell County he named Love Valley.

The sleepy western-style town founded by Andy Barker and his wife, Ellenora, would see all kinds of changes through the 60s, 70s, 80s, 90s and beyond, but one thing would remain the same: a love for the outdoors.

A church was the first building to go up in Love Valley in 1954. Then the arena was built with stores situated around it. But Andy decided the setup wasn't ideal, so he moved the shops part way up the mountain. That's where you see the Main Street dirt road lined with horses today.

The town of Love Valley was officially incorporated in 1963. Andy served as mayor for more than 40 years. He passed away in 2011; Ellenora would follow in January 2018.

The current mayor, Anthony Kennedy, estimates about 300 people live in the area, including 113 registered voters. He told NBC Charlotte the tiny town has had its ups and downs, but the recession of 2008 did a number on tourism.

"People that came up here, and this was their second home, they've had to let go of that because they couldn't pay the bills at (their first) home," Anthony said.

When the people don't come, the shops can't stay open. In fact, the general store just reopened last month. That and Shelby's Place are two of a few businesses you can visit on Main Street. But Anthony said things are looking up.

"There's fresh people coming in that has the heart and the want-to, to try this type of lifestyle," explained Anthony.

Believe it or not, at one time, Love Valley was home to more than 100,000 people, at least for a day or so. A Woodstock-like festival was held there in 1970. A little-known band (at the time) called the Allman Brothers headlined the event. The town was overwhelmed, to say the least.

While the town doesn't plan to host that many people again, the residents welcome visitors to explore what Love Valley has to offer. In fact, some have visions of cowboys and cowgirls decked out in their heads.

"I would love to be able to give this area a working western town where we're all dressed up," said Mark Loden who manages Shelby's Place. "But it's getting everybody on board to do it."

Besides getting more businesses on board on Main Street, Loden would also like to see regular wagon rides where folks can tour landmarks and learn the history of Love Valley. Rodeos at the arena, the Halloween parade, a chili cook-off and local trail rides pull people into town, but those events don't happen every weekend.

Recently, Love Valley hosted a big event: The Junior Southern Rodeo Association at Diamond S Arena. Events like mutton busting, calf riding, steer riding, bull riding, calf roping, goat tying and barrel racing kept the crowd entertained and on the edge of their seats -- whether they were high up in the bleachers or right up against the fence with their camping chairs taking in all of the action -- and the dust.

Love Valley is more than just Main Street and the arena though. There are thousands of acres of private land where owners let visitors ride the trails on horseback 365 days a year at no charge. Mountain bikers and hikers are welcome, too. The paths are even part of the Carolina Thread Trail.

If you don't own a horse and trailer, there are rental stables where you can saddle up, take guided trail rides and enjoy a leisurely afternoon.

"We want Love Valley's focus to always be around the horses and living that lifestyle versus a more traditional lifestyle," Tori said. "The best asset we have is the outdoors."

A visit to the town could be done in a day; it's only about an hour north of Charlotte. However, if you want to stay the night, there are camping options ranging from primitive to full-service hookups. You can also find some rooms to rent, even a few cabins.

One more thing: You may have heard there are no cars allowed in Love Valley. This is partially true. Yes, you can drive to the town; no, you can't drive on Main Street. That's for horses only. However, there is a parking lot close by.

Check out these links for more information or call 919-349-3541 to start planning your trip!