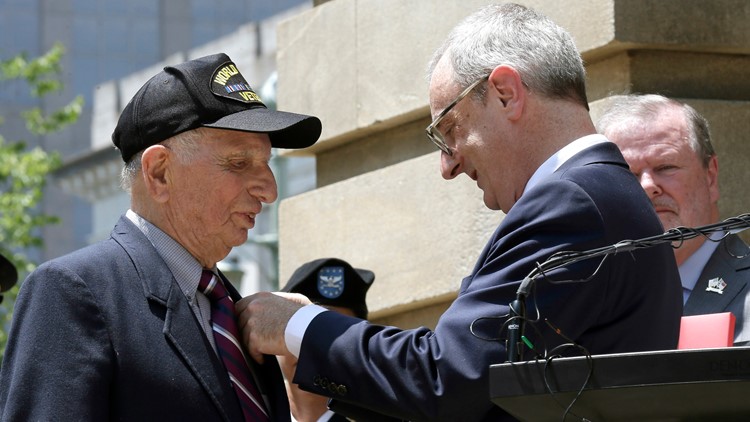 RALEIGH, N.C. — On his 20th birthday, James Stevenson landed on Omaha Beach to fight in the World War II Allied invasion of France.

At the ceremony at the old state Capitol, Stevenson stood shoulder to shoulder with other World War II veterans in a solemn salute before a French diplomat presented him with one of France's highest military honors, the French Legion of Honor Award, and thanked him for fighting in Normandy in 1944.

In one battle, the Wilmington resident was able to steer his division away from harm when he realized that German enemies were waiting to ambush them.

"It was because I was a Boy Scout and I recognized the bushes were all bent wrong, so we were in the process of walking right into the Germans" Stevenson recalled.

During the ceremony, he kept a list of the names of everyone who served in his division in his pocket, all of whom he said are gone now.

"I was thinking of them the whole time," he said. "We were successful in those wars because of guys coming from all over the country."

Military officials, lawmakers, veterans and World War II reenactors at the ceremony listened as one veteran read aloud former President Dwight Eisenhower's message to the troops ahead of the invasion of Normandy on June 6, 1944.

An official read aloud the names of the 39 North Carolinians who died during the invasion, followed by a trumpet performance of taps and a rifle salute.

Earlier in the morning, lawmakers passed a resolution to honor the living and dead who participated in the Allied invasion of France.

Senate Majority Leader Harry Brown's voice cracked with emotion as he recalled his late father, a World War II veteran, as well as those who participated in D-Day.

"They're part of the generation that simply got things done, with no fanfare, no likes on Facebook," Brown said.

He said they "rarely spoke of their service — for many it was just too painful, even after many decades."

World War II veteran Ralph Denson, who was honored at the ceremony with a Bronze Star Medal, shed tears while remembering close friends he lost in the fighting — two of his friends died within 10 minutes of each other in the Battle of the Bulge, where Denson was on the front lines.

Denson was only 18 when he was drafted into service and decided to report for duty rather than request an exemption to stay and work on his family farm. He followed three of his brothers who were already fighting in the war; miraculously, all four made it back home, but he said it was too hard to talk about the war with his brothers.

"You think about the ones who didn't make it," Denson said. "They are the heroes, really."