Two weeks ago, John Leake received a very important call from the White House. The President needed a gift to give to the Queen and he was the man to craft it. 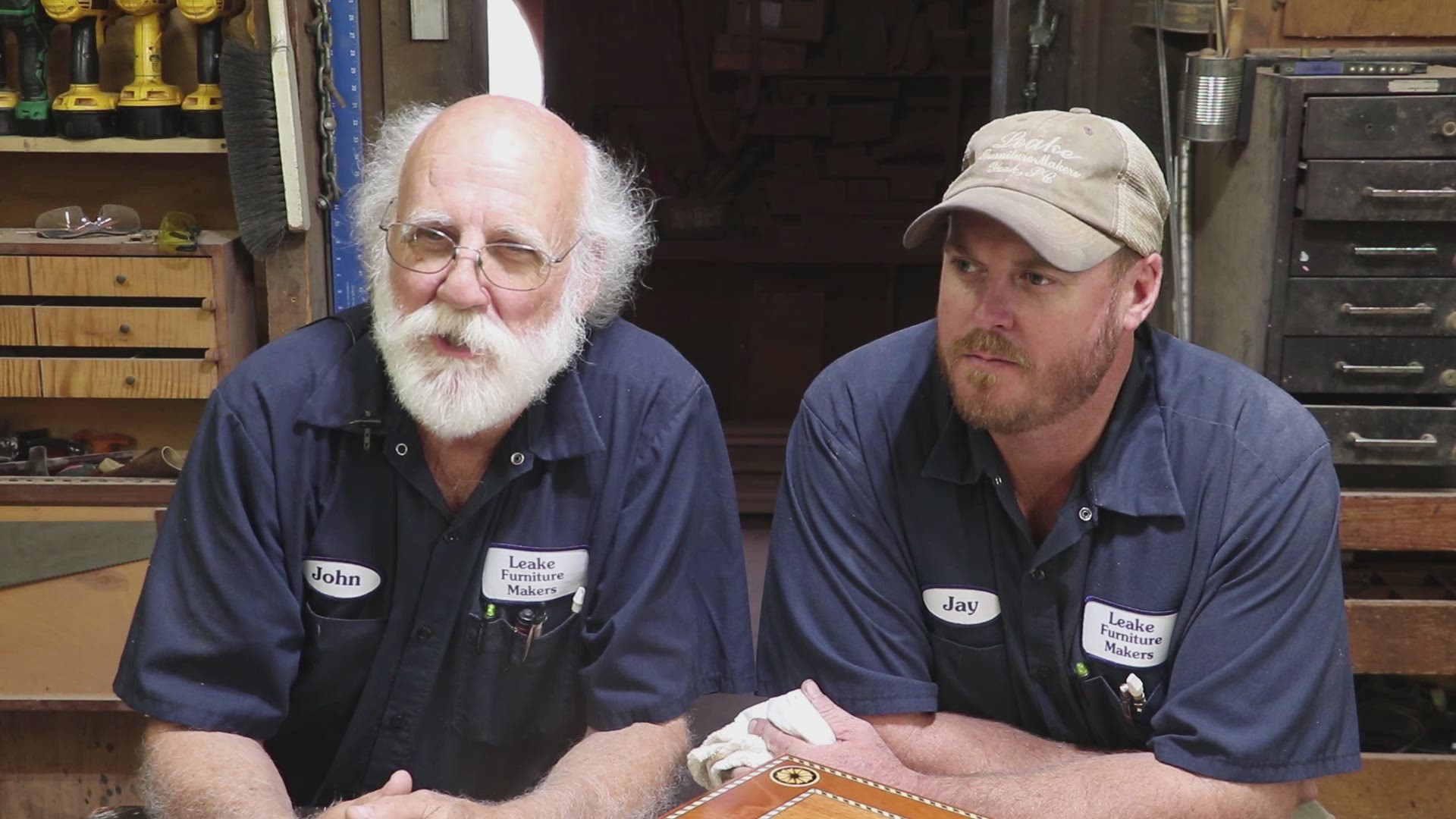 YORK COUNTY, S.C. — What do you give the person who has everything?

A small local shop in York County is now forever connected to the Queen of England, all thanks to a little small presentation box the father and son duo handcrafted especially for the President of the United States.

John and Jay Leake, the only two employees of Leake Furniture Makers, were asked by the White House to create a gift box that would house a Tiffany & Co. Brooch for the Queen of England.

It was only after the exchange that the two learned the gift box would be presented to Queen Elizabeth II during Trump's state visit to England for the 75th D-Day anniversary commemoration.

John and Jay Leake said one day out of the blue they got a call from the White House. The White House had requested the two make a special handcrafted wooden box -- and they had little time to complete the request.

"About 2 weeks ago," John said reminiscing about the phone call."It was not long ago. It was a spur of the moment thing. So we made every effort to make sure it was completed and in their hands in time."

They were, after all, working for the President of the United States.

John and Jay immediately began working on the box. After receiving specific dimensions from White House staff, the two began their sketches.

"So we made sketches and submitted them to the White House and then back with some revisions. All of this had to take place pretty quickly because we didn’t have but a week to do this," John said. " And that included getting that special wood down here."

The White House never divulged which type of wood they sent down to the Leakes but John believes it was Basswood.

"It has a special connotation going back to Britain a long time ago and that’s why we think they come from that kind of wood," John said.

John said he believes the Windsor Castle's interior is heavily carved with the same type of wood the Leakes used to create the special wooden box that was presented to the Queen.

The Leakes milled the wood and assembled it into a small box about five inches by 1 3/4" deep. They then hand-cut dovetail joints which were used to fasten the sides of the box. The top was etched with a design from an old drawing of the White House provided by Presidential staff.

"I think the image the White House probably has some significance too – it was not a well-known image. We think it goes back to the 1812 war," John said.

John and Jay said they are just blessed that they were given the opportunity to be a part of national and international history.

"We're just extremely proud and pleased to be in this little small Podunk little shop, but have made a pretty small significant piece of history for the United States and for England," John said.

The Leakes hope this project will put the town of York and the even smaller town of Filbert on the map.

John Leake said he knows the White House puts a lot of thought into their gifts and credits just plain old luck for his opportunity to get to work with the White House.

"I think the President and Mrs. Trump just wanted something special to give the Queen and what do you give the person who has everything? I don’t think it happened overnight, we just had a tiny hand in it but were happy to be available for them. Right place, right time," John said.

Before sending the box to Washington, Jay signed his name, date, and location on the box.

The Leake Furniture business spans four generations in the York, South Carolina community. The father and son team has produced a number of items for the White House and the U.S. State Department. Nationally known for exquisite period furniture reproductions the Leake workshop's signature product, The Cellaret, was featured in a national magazine in 2014.