All his life, Wayne Knight longed for riding in a hot air balloon. Although his hospice caregivers sought ways to make it happen, the possibility became slim as Knight became more and more dependent of his oxygen machine. 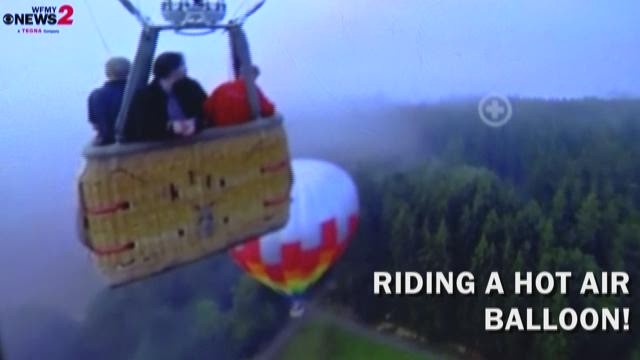 STOKESDALE, N.C. – At 60 years old, with terminal lung and kidney cancer and other cardiac conditions, Wayne Knight is generally confined to the four walls of his mother’s home.

Knight worked in personal healthcare for nearly 32 years, until he developed his condition that made him need someone to care after him instead.

All his life, Knight longed for riding in a hot air balloon. Although his hospice caregivers sought ways to make it happen, the possibility became slim as Knight became more and more dependent of his oxygen machine.

“I’ve always wanted to ride on a hot air balloon,” Knight said. “But I can’t do that.”

Pete Overcash, one of the chaplains at Hospice and Palliative Care of Greensboro, thought of Virtual Reality goggles to grant longing patients their last fulfilling wishes.

Before getting Knight setup with the VR set, he mentioned he had never used virtual reality in his life before.

In the comfort of his home, sitting in his favorite chair, surrounded by his mother, brother and hospice team, Knight finally got to see what it’s like to look down from the sky above in a hot air balloon.

Knight turned his head up and down, and spun in circles in his chair as he watched the 360-degree view of the hot air balloon ride he was getting on.

He commented in awe everything he saw and felt during his hot air balloon ride.

“When I was looking up I could see my aunt and my daddy,” Knight said fighting off the tears. “I know they’re there.”

For Hospice, experiences such as this one are important for their patients as they offer encouragement by allowing them to achieve goals they have for themselves.

“Those kinds of achievements offer patients a sense of control at a time when so many things are beyond their control,” says Jane Gibson of Hospice and Palliative Care of Greensboro.

Debbie Garner, a social worker at Hospice on Wayne’s care team, said “It’s a very humbling experience to be able to see Wayne achieve his goal of riding on a hot air balloon.”

Through Hospice’s “holistic” approach to hospice care, chaplain Hillary Irusta says these opportunities “give such meaning to their life, to that day, and to that moment, and we see that it helps reduce stress and anxiety and provides, as we saw with Wayne, a sense of peace.”