Senior Jonathan Edwards had no idea his American Sign Language rendition of the anthem would inspire millions of people around the world. 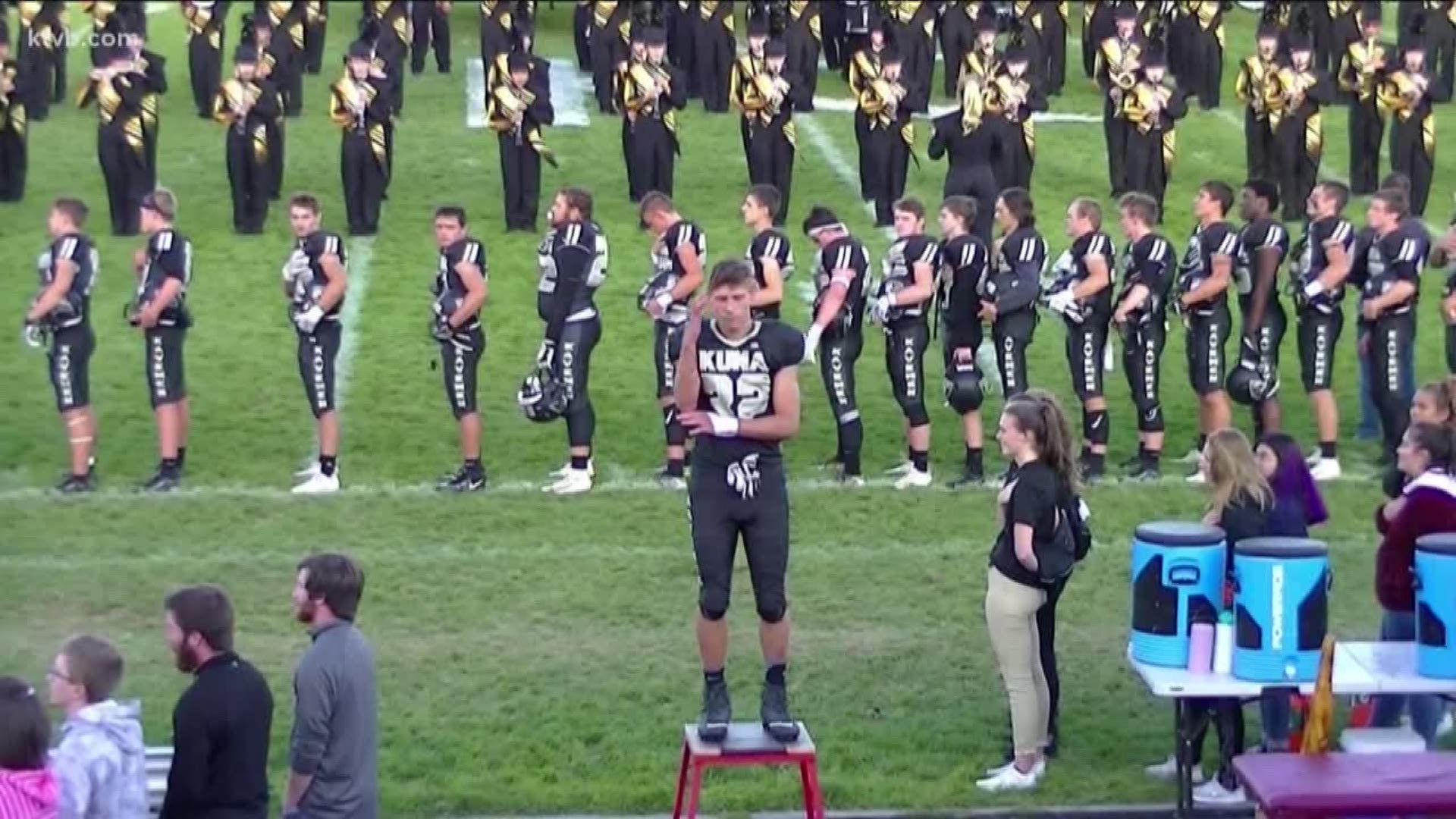 KUNA, Idaho — This story has it all. High school football, a small town, patriotism, and a kid with a lot of talent and an even bigger heart. It’s one of those stories that people talk about, and in Kuna, Idaho they are.

This has been a phenomenal season for the Kuna High School football team. They went undefeated in the regular season, and they are powering through the playoffs, knocking off everyone they come up against.

“I feel like football is Kuna's time to shine, we have everybody there, the entire city comes out to watch us,” said Kuna High football player Jonathan Edwards.

Something special happened at a game this season in this small, proud Idaho town. It touched millions of people around the world.

Jonathan Edwards is a senior, and one of the star players on the team.

“Man, Basically ever since I was born I've always loved football, always played it,” said Edwards.

But, there's more to him than just football. If you ask his coach, Sherman Blaser, a former Boise State football standout, he'll tell you.

“You know, the best way to describe him is he's the kind of kid you want your kids to be,” said Blaser.

For his senior project, Edwards decided to tackle something a little different. Over the summer he took American Sign Language classes. He wanted to be able to sign the national anthem at a home game.

“We do the national anthem every game, and I thought it would be a creative idea because you don't ever see anyone doing that,” said Edwards.

When the chosen game arrived on a Friday night in late September, Edwards says he was nervous and anxious to get it right.

“They definitely put him out there, there was a podium. He had to climb up on the podium in front of everyone, and the music started,” said Chrissy Edwards.

Jonathan got up on that podium, jitters and all, and signed the anthem with the band accompanying him. All eyes were on him. He said it felt like no one said a word. When he was done, the bleachers erupted in hearty applause and cheers! The community was touched, and blown away. So was his coach.

“We all got the goosebumps, I guess that’s the best way to describe it,” said Head Coach Sherman Blaser. “The way he presented it, it was beautiful.”

It was a proud moment for everyone, watching this high school kid, #32, in his uniform and pads, signing our anthem.

Kuna High's principal Brian Graves said what Jonathan did was inspiring to everyone.

“This is a pretty patriotic town. The national anthem means something to us,” said Graves.

The next morning, Chrissy Edwards posted a video that she took of the inspiring American Sign Language anthem on Facebook.

“A friend of ours who is in the deaf community asked to share it,” said Chrissy Edwards, Jonathan’s proud mom. “It just went from there!”

The anthem post went viral within hours. His mom says she can see why.

“I think it a combination of the fact that it was patriotic, and he was putting himself out there to help communicate with people with a disability,” said Chrissy Edwards.

Jonathan was shocked. He wasn’t expecting the anthem to impact so many people.

“I remember waking up and it was only at 200 views, it maybe hit a thousand later in the day. I'm thinking that's cool, I'm glad people got to see it,” said Jonathan Edwards. “Now, it's at over three million views!”

There are thousands of positive comments, Jonathan and his mom try to read as many as they can.

The small town of Kuna, Idaho is so proud of its viral football star.

“It's our kid, it's our school, it's our town, so that's what's really cool,” said Kuna High School Principal Brian Graves.

His coach says it just proves that the school and the community are doing something right, on and off the field.

“To see the effort that he put in to learn the anthem in ASL, and then to be able to provide that service to our community was phenomenal,” said Coach Blaser.

Jonathan Edwards says ASL will most likely be a part of his future career path. No matter what field he goes into, he wants to help people by translating for the deaf community.

But, right now, he has his eye on a championship for his team. The whole community is hoping for a storybook ending to this incredible season.

RELATED: This ASL interpreter steals the show at rap concerts