"There was one picture where they caught me holding my heart. It was the first time I saw her in the dress. I think I said, ‘Be still my heart.'" 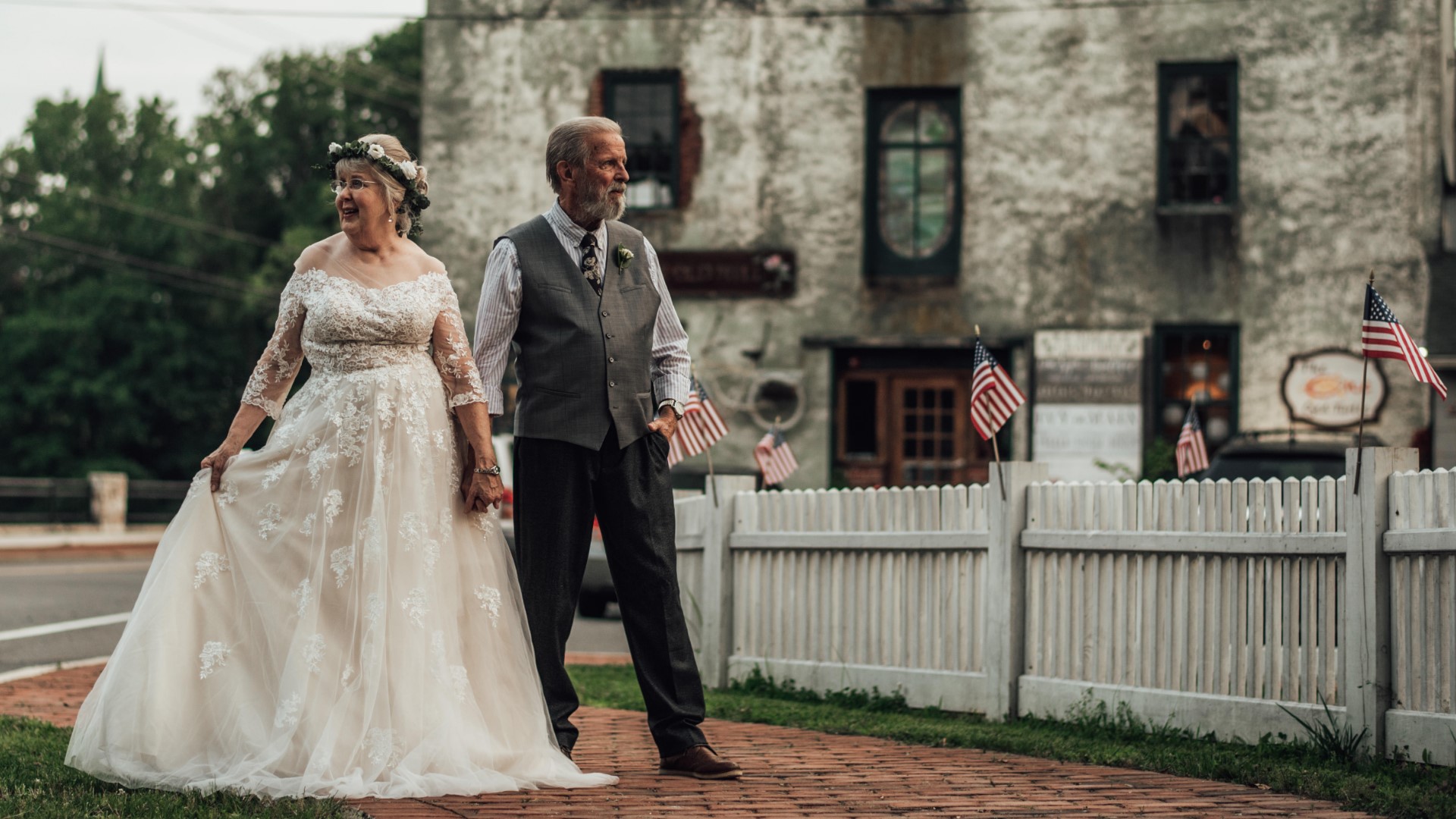 George Brown, 82, and his wife, Ginger, 78, traveled to New Jersey last month to visit family and mark the milestone achievement. What they didn’t know is their granddaughter, who is a photographer, was planning a special event to showcase their love.

"I was just blown away that she wanted to go to all of that trouble for us. But you know, you can’t say no to your granddaughter," Brown said. "I said, 'For you, Abby, I’ll do anything.'"

Abigail Lydick got several vendors to pitch in and provide the essentials for her grandparents’ photoshoot including formal wear, flowers, jewelry, hair styling, and makeup.

"Grandmom was more nervous than anyone," Lydick said. "She had never gotten any kind of professional hair and makeup done let alone fancy pictures, so we had to reassure her that she was going to rock this thing."

Once Lydick’s grandmother saw everything come together in the mirror, her nerves disappeared. As for Brown, when he saw his bride, he was shocked.

"There was one picture where they caught me holding my heart. It was the first time I saw her in the dress. I think I said, 'Be still my heart,'" he recalled. "She looked beautiful in it for sure."

Lydick borrowed one of her husband's suits for her grandfather.

"Amazingly, they are the same exact size in everything, and he looked super dapper," Lydick said.

"Granddad wasn’t quite as nervous (and if he was he didn’t let on), and he was cracking jokes the whole time in typical George Brown fashion," she added.

Brown said it was hot during the photography session, but they'd steal away in the shade when they could. Lydick said her grandfather did his part to keep things light and airy.

"Almost the entirety of the shoot consisted of Granddad cracking jokes, which would in turn cause Grandmom to break out in laughter. She would usually return with a coy comment as Grandad gave her a kiss on the cheek," said Lydick.

"I wanted to follow the instructions of my granddaughter who’s really a good photographer. She takes great pictures. And she’s so energetic. I was kind of focused on getting everything right that she wanted to do," said Brown.

"I hope this blesses Abigail and her photography business," he added.

Once the shoot was over, and the pictures were shared on Lydick’s photography Facebook page, the images spread quickly all over the internet.

"They have such natural chemistry together that it wasn’t hard to catch a lot of sweet moments," said Lydick.

"I had no idea that would happen," Brown said. "I wanna say I was a little bit breathless. I said, 'I can’t understand this.'"

Brown, who’s been a pastor for 46 years, believes the whole experience was "fueled by God."

“It was God’s message through this to the world about the marriage covenant that seems to be so tattered today,” he said. "For the truth is that marriage is not a contract, but a covenant. A contract can be broken, but a covenant between God, man and wife is a vow to be honored.”

The couple shared these three tips for a long-lasting marriage:

"I think (humor is) what saved my marriage at hard times, ‘cause I could always make a joke at the right time, and you can’t stay mad when you learn to laugh at the punchline. That’s the secret," said Brown.

The couple met on June 2, 1958. They ran into each other a few times after that, but it wasn't until Brown's future wife came home from a date with another guy that they became an item.

"When she walked in the door, her brother and his wife were sitting on her living room sofa and sitting next to them was George. They asked her if she’d like to join them for a late night breakfast at the diner, and from that point on George and Ginger were the sweetest pair," said Lydick.

One year and four days after their first meeting, the couple was married.

"You always realize in the beginning that we’re making a commitment and you had to work at it. We didn’t have any real visions that it was going to be easy," Brown said. "We had decided we would make a promise to each other that divorce would never be a consideration. It wasn’t an option. And it would be tough."

Over the course of their 60-year marriage, the Browns had four children, 18 grandchildren, and 19 great-grandchildren.

Now their viral photos are validating the power of love for thousands of people all over the world.

"A young couple said, 'I hope we can achieve what you achieved,'" said Brown. "Some said they were just married, and they sat down together and watched the pictures and prayed they could make it 60 years."

“It was inspiring, I think, to most people. And if that did the job then I’m happy,” he added.