A $7 million gift to Novant Health led to the opening of two Michael Jordan Family Health Clinics crucial to fighting COVID-19 and other public health crises.

CHARLOTTE, N.C. — Last summer, Michael Jordan and the famed Jordan Brand pledged to give $100 million to multiple organizations over the next decade to help the Black community.

This donation came less than two weeks after George Floyd, a Black man who was handcuffed while a white police officer pressed his knee against Floyd’s neck for nearly eight minutes as Floyd said he couldn’t breathe, died.

We know some of the early donations went to Black Voters Matter, which worked to encourage voter registration and voting. It was the headline in a string of recent gifts given by the Hornets owner, including several to assist with public health.

“This place literally saved my life," Bret Terry said as he sat in a state-of-the-art medical clinic off Statesville Avenue in Charlotte.

In the last two years, $7 million dollars donated by Jordan to Novant Health have led to the opening of two Michael Jordan Family Medical Clinics.

In 2019, the first opened in west Charlotte on Freedom Drive.

Then in September 2020, the second location opened in Charlotte's North End. 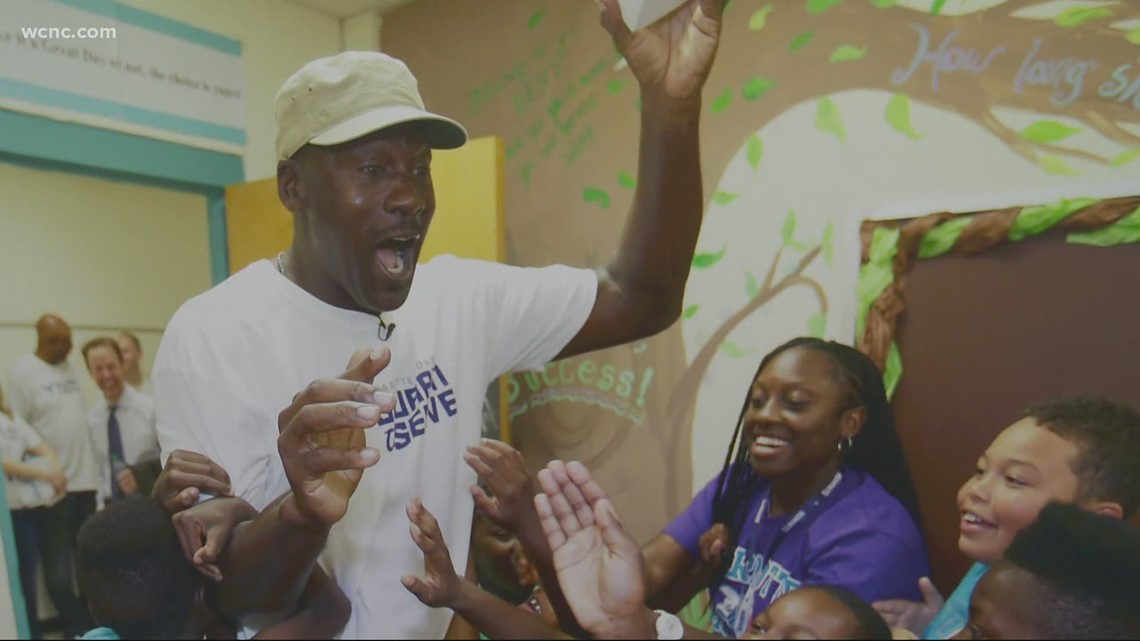 How Michael Jordan helped to open a $7 million clinic in Charlotte
CHARLOTTE, N.C. - All this month, WCNC Charlotte is celebrating Black History Month by highlighting historical people and places in Charlotte and the Carolinas. Today we are honoring NBA legend Michael Jordan, but not just for his contributions to the game of basketball.

"It gives my family great pride to know we are making a difference in Charlotte," Jordan said via Zoom at the opening of the second clinic.

The locations were picked based on need, and each had a severe lack of access to health care.

“Oftentimes I’m seeing patients who have gone years without seeing a doctor ... or have been to the emergency room multiple times but does not have someone that knows them personally or knows their medical history," Dr. David Baker, the lead physician at the North End clinic, said.

One of the major issues the clinics help to solve is better geographical access to residents.

"Just to hear the heartfelt stories about what the patients had to do just to even get to their appointments," clinic administrator Alex Hogue said. "You’re making such a huge impact on the people in this community.”

For Bret Terry, it had a life-saving impact. He had developed diabetic levels so bad he said he was on the brink of death.

"They told me if I had waited around another week I would have died,” Terry said.

His A1C levels went from about 14 back down to 5 after several months of treatments at the clinic.

Jordan’s clinics help with access to continued care and also assist with finances for those who need it.

In November it was announced Jordan would give $2 million in proceeds from the hit ESPN documentary series "The Last Dance" to Feeding America’s food banks in the Carolinas and Chicago.

That money is now making an impact in Charlotte, at Second Harvest Food Bank of Metrolina.

"Completely generous at a time that we need all the help we can get," CEO Kay Carter said, noting that the COVID-19 pandemic has exacerbated hunger in the region.

The money is helping send boxes of fresh produce to local residents throughout the month of February.

"Specifically targeted at counties in our service region that have a high rate of racial disparity," Carter said.

Each box is filled with about 20 pounds of "hearty produce items" like sweet potatoes, cabbage, carrots, onions, apples, oranges and celery, that have a long shelf life.

"Fresh produce is really out of reach for a lot of people living in poverty," Carter said. "They need it to say healthy.”

The amounts of generosity given by Michael Jordan can be hard to process.

But we talked to the people in Charlotte whose lives were affected -- and even saved -- by the #Hornets owner's donations.

Staying healthy is just what Terry is doing now, like thousands of others, because of Michael Jordan. And he lived to tell him about it.

Jordan’s clinic in west Charlotte has saved lives during the COVID-19 pandemic by caring for over 10,000 patients through testing and other treatments. Soon, it will also be providing COVID-19 vaccinations.