Customers will have to sit down to have a drink, and there will be no congregating at the bar. 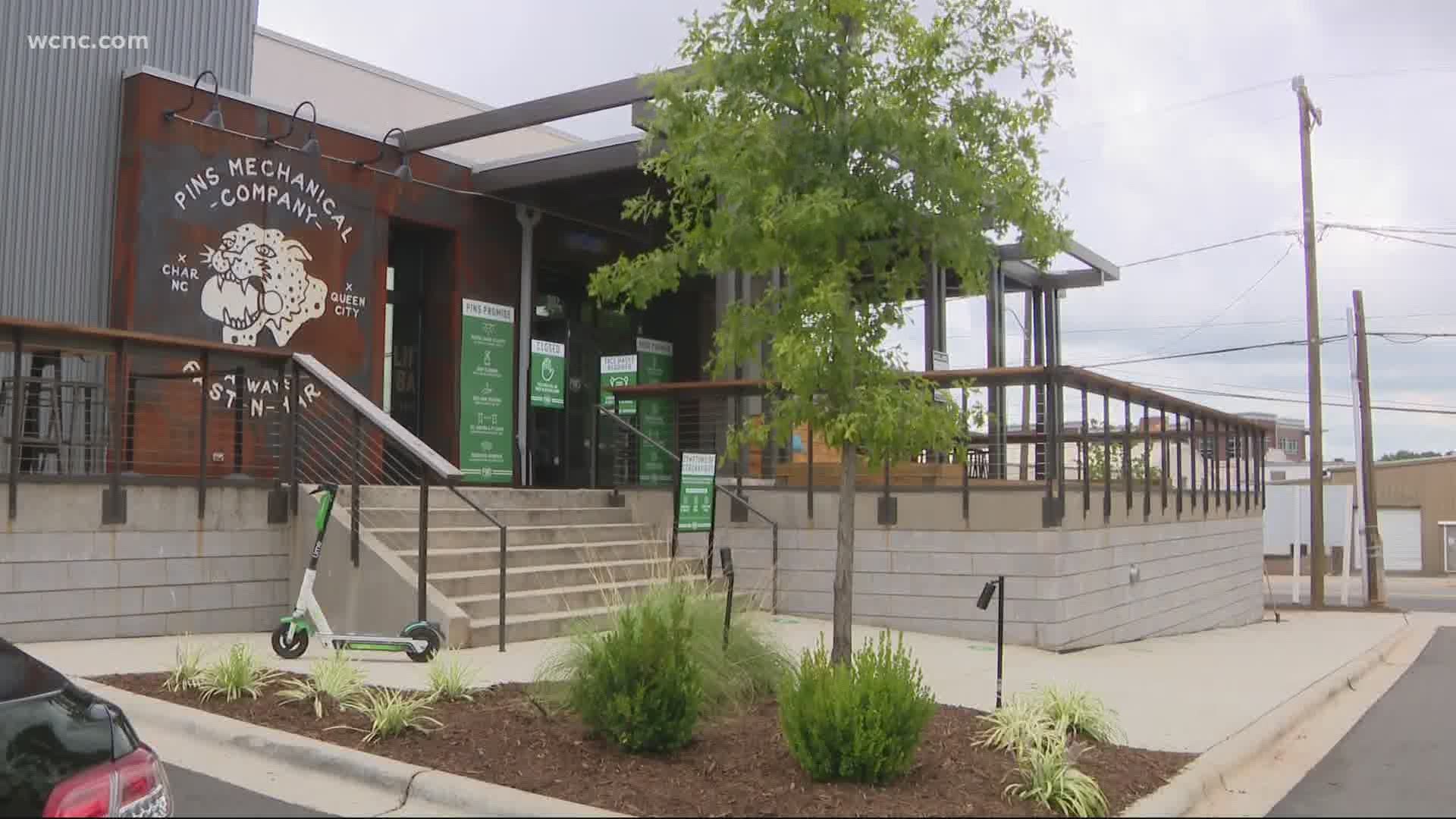 CHARLOTTE, N.C. — A popular South End bar opens in defiance of the Governor Cooper's Executive Order, hoping to show it can operate safely.

Pins Mechanical Company was only open about four months before the pandemic. It has now been closed four and a half months.

Since it is not a restaurant, it was left out of Phase 2 of Governor Cooper’s reopening plan. Restaurants with bars, wineries, and breweries have all been allowed to operate.

Pins Mechanical Company is part of Rise Brands, which has several other establishments across multiple states and cities.

CEO of Rise Brands, Troy Allen said he took a combination of the safety protocols at other locations, in addition to state and local rules, to go above and beyond to reopen the Charlotte location.

“Everything has been in place and sitting for two months, and so again, after being closed for four months, at some point I still need to run a business,” Allen said. “It's super important the safety aspect of this, but I know we're going above and beyond."

As soon as patrons walk up to Pins Mechanical Company, they’ll notice signs for the new safety protocol. Allen said the bar is easing back into business.

Pins Mechanical Company is known for its arcade games, pinball, outdoor games, and duckpin bowling. Allen said those won’t be an option for now.

Customers will have to sit down to have a drink, and there will be no congregating at the bar.

Allen said he knows the business will receive scrutiny for reopening, but he said Pins Mechanical Company can be just as safe as other establishments with bars that have been legally allowed to operate.

"Are we a restaurant? No. Are we taking all the precautions that restaurants are? Without question and more,” Allen said. "If we're following all the regulations and someone is sitting down here in a safe environment having a drink or they're eating food, there's no difference."

The bar has food trucks outside in its parking lot that customers can order from, Allen said, but because it doesn’t have a full kitchen on the property, it is being left behind.

Allen hopes that by reopening, Pins Mechanical Company can lead by example to show state and city leaders how a bar can keep people spread out and safe.

“Right now, we’re just sitting and waiting for people to tell us what we can do,” Allen said. “We have to show them how we’re doing things and what we’re providing, again, to lead by example.”

For anyone who violates the Executive Orders, Charlotte-Mecklenburg Police Department said officers are enforcing the rules through voluntary compliance, with citations and/or arrests as a last measure.

While many of the gaming activities at Pins Mechanical Company are not currently available, Allen said the bar is already preparing for the day those can be brought back for customers.

Pins Mechanical Company has invested in UV sterilizing lights to disinfect shared gaming equipment. Shared games, like ping pong or Jenga, will have to be checked out and put in a UV sterilizing tent between uses to ensure it is cleaned for the next patron.

Similarly, with the duckpin bowling, UV sterilizing light technology has been installed in the lift so the balls are sanitized each and every time that they are rolled down the lane.

"A ball goes through there [the lift], it takes about four seconds,” Allen said. “This [UV light] sanitizes it in two seconds."

Allen said he would like to see the duckpin bowling brought back sooner, rather than later because he believes it can be a safe activity.

“When it's being sanitized after every time someone touches it, it no longer becomes a shared surface,” he added.

Bowling alleys across North Carolina are not allowed to be open under Phase 2.

Under a judge's ruling in early July, 10 Park Lanes on Montford reopened but shut down again a day and a half later when the ruling was blocked.

"When you look at the other businesses that are allowed to be open, and then you basically have singled out bowling alleys as one, there is absolutely no evidence that we should be closed,” said Patric Zimmer, one of the owners of 10 Park Lanes.

Zimmer said the owners of 10 Park Lanes want to abide by the state orders and are waiting to see if Governor Cooper will allow bowling alleys to reopen August 7.

“On the other hand, when we know that there’s no basis and no data or no evidence to back up the current decision,” Zimmer said, “it’s kind of hard for us to stay closed.”

“I had a very prominent business person call me yesterday and he asked me, he said, ‘Patric, how can tens of thousands of university students be descending back on universities? How can Disney World be open, and you guys are still being singled out to be closed?’ Zimmer said. “And I have no answer for that whatsoever.” 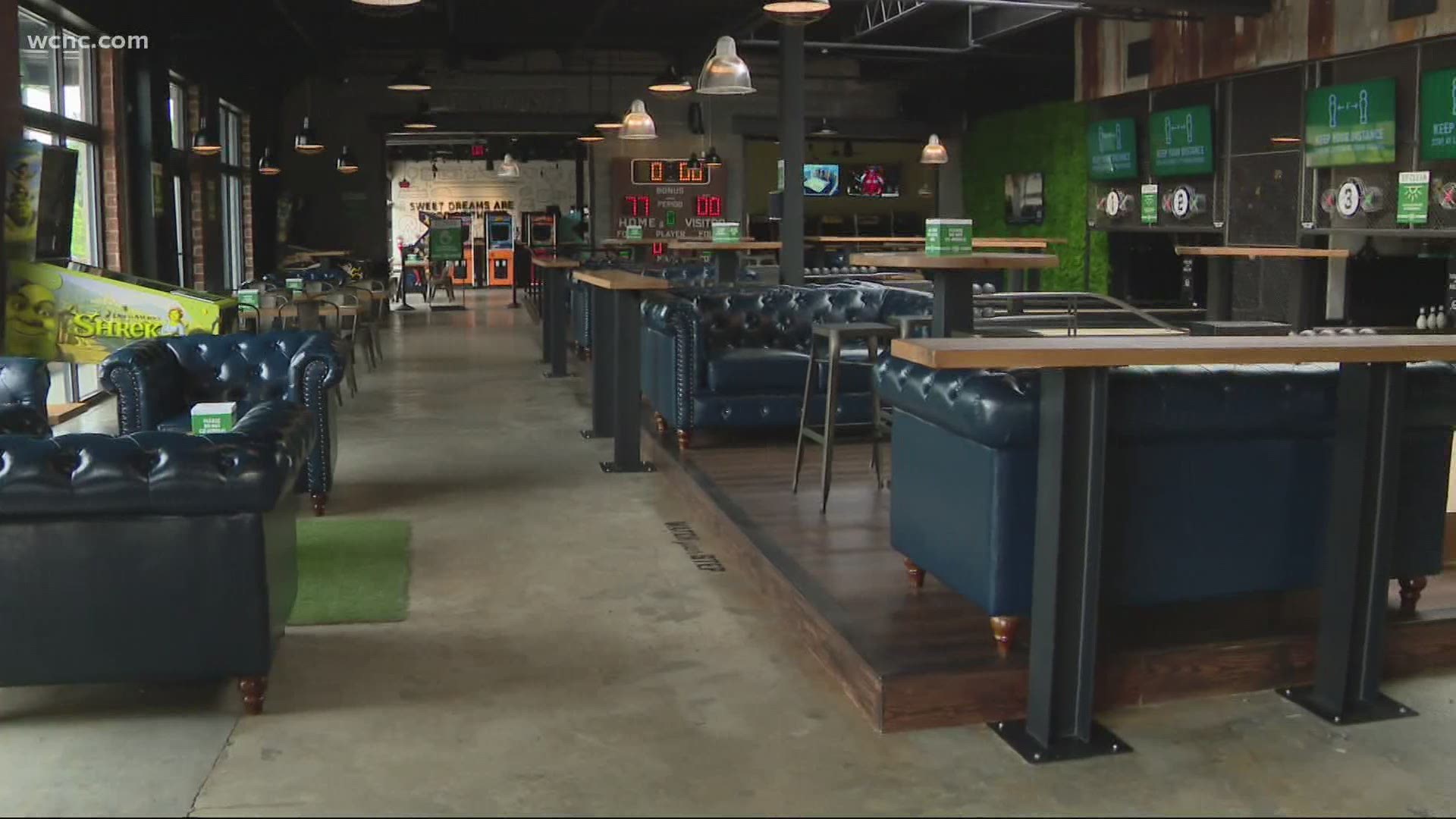