The $2.7 billion budget sets aside money for some of the city's top priorities like cutting down on violent crime and funding the arts. 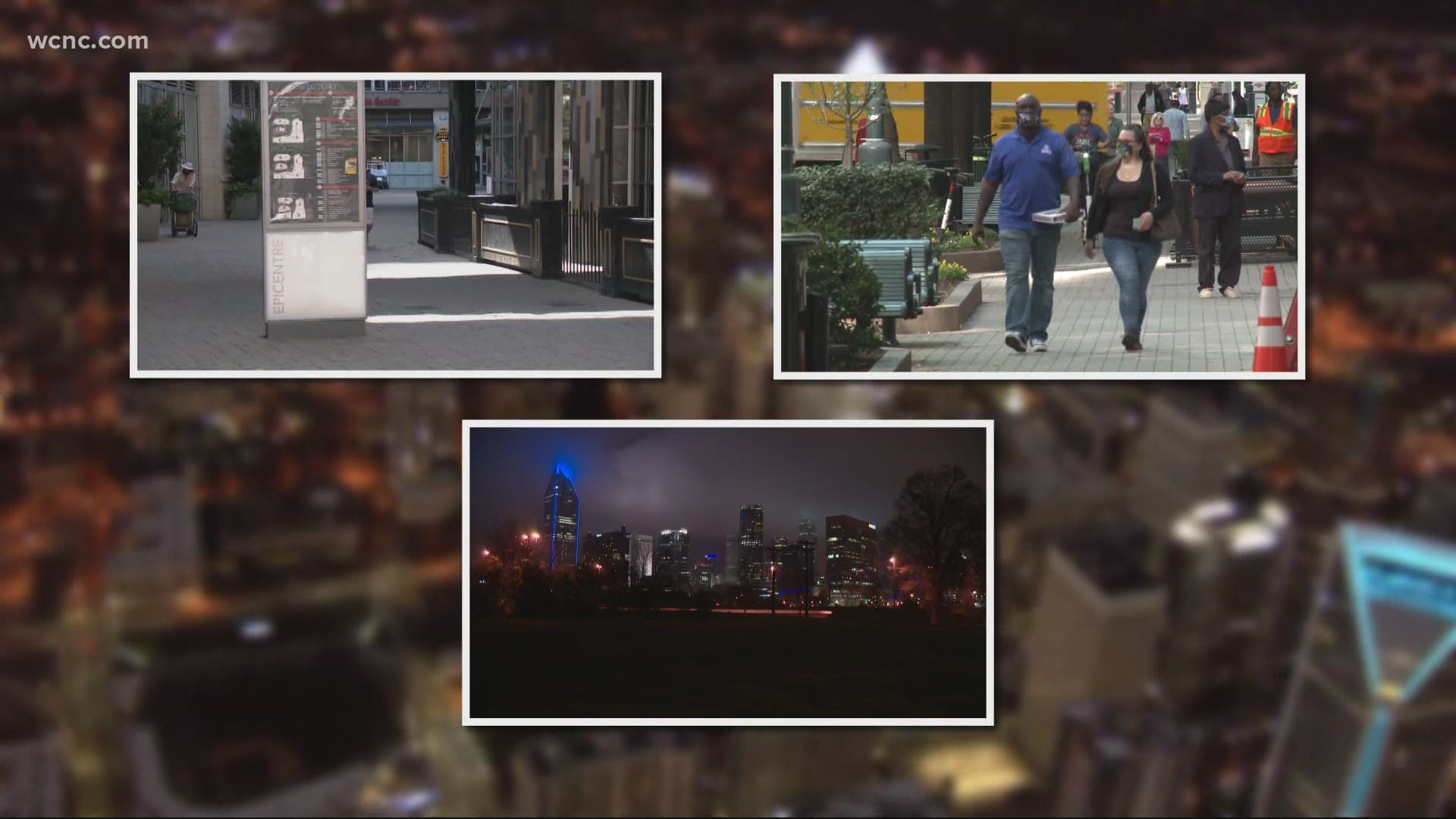 CHARLOTTE, N.C. — Monday night, Charlotte City Council turned its focus to the future of Charlotte in two big ways: passing next year's budget, and getting an update on how Uptown Charlotte is expected to "bounce back" after a difficult year.

Charlotte city leaders formally approved next year's budget at its meeting Monday. The $2.7 billion budget sets aside money for some of Charlotte's top priorities, like cutting down on violent crime and funding the arts. But you will notice some small changes on some of your monthly utility bills.

Charlotte-Mecklenburg Police would get a $10 million increase to $300 million to pay salary increases and hire more members to its crisis response units. Crisis response agents are trained to help officers when they deal with people who may have mental health issues.

Funding for Arts and Culture will also increase from $3.2 to $6 million a year. But that part of the budget has been controversial because that money will no longer be managed by the city's arts and science council. Instead, decisions will be made by a new board led by everyday citizens and people appointed from the private sector.

Another area that's raised some eyebrows includes pay raises for city council and Mayor Vi Lyles. Lyles' salary will increase from $28,000 to $39,000, while councilmembers will go from $21,000 to $32,000. Overall compensation would also jump for those leaders. The only vote against the budget Monday was from Council Member Tariq Bokhari, who said he was worried increased pay to council and the mayor would make it a career job.

.@FinTechInnov8r says he will vote not on the budget because of the increase in pay for city council and mayor. He’s worried about it becoming a career job if they up pay to council members and mayor. He also noted of all times, now is not the time to do it. #CLTCC @wcnc

The future of Uptown Charlotte

The center of the Queen City took one of the biggest hits during the pandemic. Still, many of the towers in Uptown aren't full of workers like they once were, and streets aren't bustling like before the pandemic.

Several businesses at the Epicentre are now gone, and what used to be a place to gather -- and a big boost for tourism -- is gone with it.

"When I moved here, it was definitely the center of -- there were lots of nightclubs, lots of restaurants," Hunter Vaughn said.

What made Uptown Charlotte so distinct to residents and visitors alike is not the same anymore, which has city leaders alarmed.

"That is so critical for us to figure out," Bokhari said.

Michael Smith, CEO of Center City Partners, took questions after giving city leaders an outlook on the heart of the city. Speaking with WCNC Charlotte after the meeting, Smith was optimistic about the future of Uptown.

"There will be an exciting new use for those vendors that are currently vacant," he said.

Smith said Uptown's hotels and businesses are already doing well on the weekends, but not during the week. He said he believes getting workers back in their offices will be a crucial element of revitalizing Uptown.

"It's the recipe, it's the recipe for vibrancy in Uptown," he said. "It's why it was such an interesting and exciting place before."

Councilman Phipps asks the possibility of transferring some of the office space in Uptown to residential space post-pandemic because of some companies choosing less office time.

Smith says yes it can happen and says there’s a need for more housing in Uptown. @wcnc #CLTCC

Smith said companies will have employees back in office space in towers in full capacity or in a hybrid model by Labor Day, but bringing visitors could be difficult.

"There will be significantly less business travel," he told the council.

Smith said companies in Uptown have told him there is no substitution for people being together in person, so it will be important to see how hybrid models impact the future of Uptown.

"You develop tomorrow's talent. So, young people who want to advance in their career -- you got to get in the office, you have to be around people, you have to learn the trade," Smith said. "I think you will see hybrid models. It'll be interesting to see how long the hybrid is used and how long employees decide that, I have a little fear of missing out and just wanting to be there where the decisions are being made."

While Charlotte city leaders didn't get many concrete answers Monday night, they are expected to start requiring more specifics in the near future.

RELATED: VERIFY: Yes, Charlotte City Councilmembers can vote to give themselves a raise