'Another stab in the back' | CMPD got raises this year, but command staff were given more

An internal City of Charlotte document shows the command staff received up to 10% increases that took effect Dec. 5. 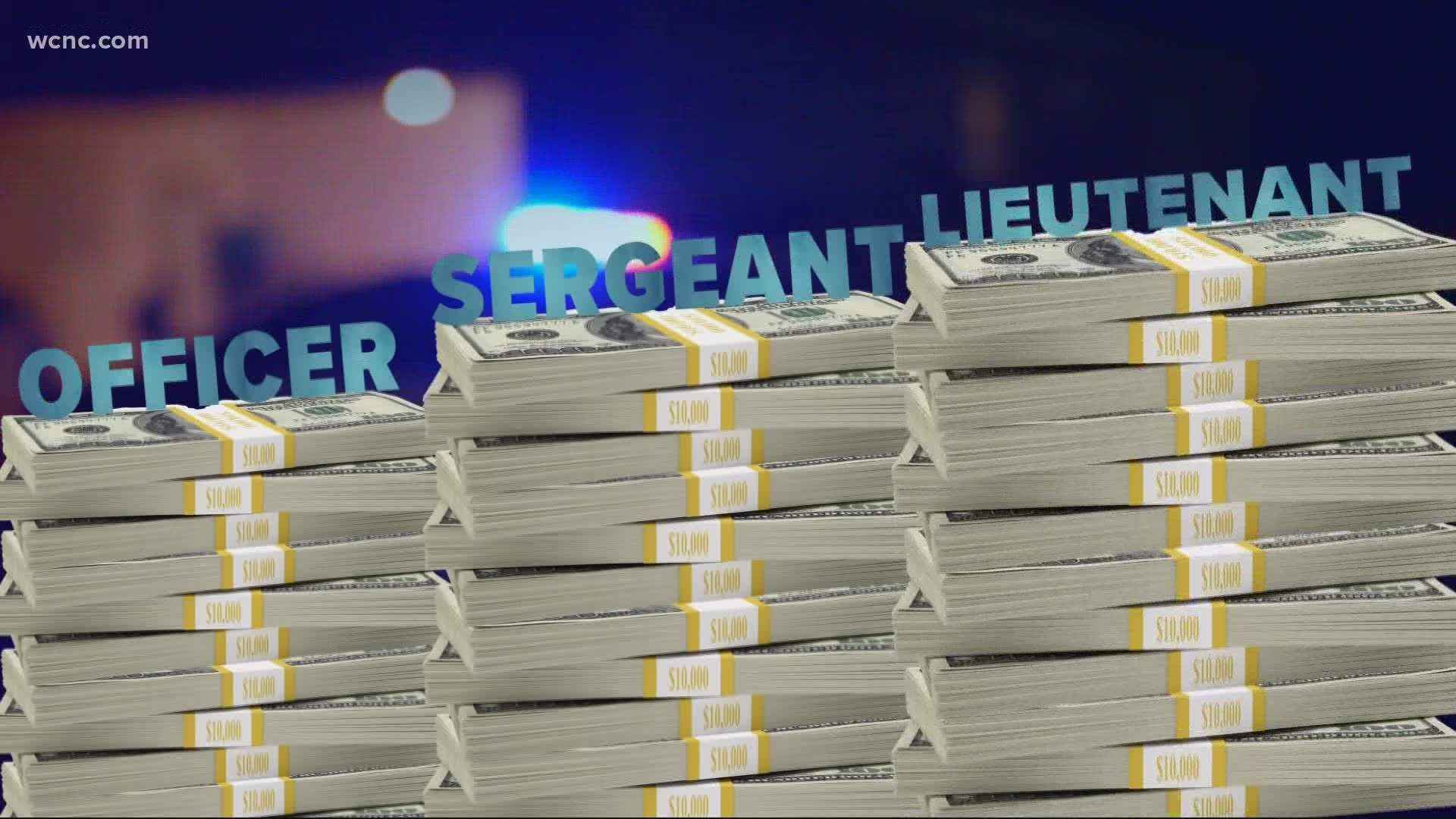 The equity increases, laid out in an internal document obtained by WCNC Charlotte, went into effect on Dec. 5, and some police officers didn't know until now.

"[Officers are] tired," retired CMPD detective Keith Way said. "They're just absolutely tired, and when this comes out, it's just going to be another stab in the back. They're the ones who had to endure the long hours, the COVID, the protests. They're the ones that had to put in the work, while the people being rewarded are sitting in the offices."

The internal document shows some lieutenants, captains and majors stood to receive raises of up to $10,000 or more.

"Where's the transparency here?" Way asked. "Why is it so secretive?"

City Manager Marcus Jones publicly heralded the city's two-year police pay plan in May, which significantly increased the high end of the pay scale for patrol officers (19%) and sergeants (16%).

RELATED: ‘Not defunded but reallocated’ | City reviews how CMPD responds to 911 calls

"How much we admire what our guys in public safety do, we wanted to make sure that we held firm with our commitment to them," Jones said during a council meeting. "We have been very deliberate in making sure these individuals reach top pay sooner and the top pay increase."

The Charlotte City Council later approved 5% raises for officers and sergeants. Meanwhile, the internal document shows the city awarded equity increases of up to 10% or more for lieutenants, captains and majors. At a minimum, the adjustments increased their average six-figure starting salaries by several thousand dollars, and their top pay by $10,000 to more than $13,000 depending on rank and years of service. Starting pay for a rookie police officer is just under $46,000. These figures are as of December 14, 2020.

"There's always room for improvement in any sort of pay, especially when the job you're doing requires a lot of risk," Ortiz said. "It's something that we're going to continue to fight to be able to make sure that these officers are getting paid."

While Ortiz said the FOP supports better pay for patrol officers, she also said the organization, which represents anywhere from rookie officers to command staff, supports the recent command staff pay increases too.

These figures are as of July 1, 2020 and are available on the city's website.

"We fully support it," Ortiz said. "It's pretty much a correction."

She said the city needed to make the correction after increasing officer and sergeant pay in recent years but not adjusting command pay to keep pace, which records show led to some sergeants making more than lieutenants.

"I get it," Ortiz said. "There's going to be a lot of people who are not going to be happy about it ... but if you don't have incentive to move up from officer or a sergeant to move up to lieutenant, then the integrity of that pay scale kind of flattens."

Way spent almost three decades with the department. He knows the CMPD continues to deal with an officer shortage. CMPD reports 265 patrol vacancies, which includes 79 recruits. Meanwhile, there are no lieutenant vacancies, six captain vacancies and two major vacancies, according to the city.

"It's just widening the gap," Way said. "For the officers on the street, it's like riding a horse. Like the old messengers, they would ride a horse to the next town until it died and just jump on another horse, and that's the way a lot of the officers on the street are feeling. They're just being rode until they can't go any further, and then, it's just on to the next officer."

The City of Charlotte, which declined an on-camera interview with WCNC Charlotte, defended the equity increases.

"The budget process that the city goes through every year is how city departments lay out their needs and spending plans for the upcoming year," the city wrote in a statement. "The budget process is always transparent and provides numerous opportunities for members of the public to weigh in and offer their input. In the case of these CMPD salaries, it was an adjustment  made in response to Officer and Sergeant pay increases and it was important from a pay equity standpoint that we make these adjustments to ensure that command-level employees are being paid appropriately given their ranks and job responsibilities. As a reminder, City Council does not take action on individual salaried employee pay, just on an overall salaried pay plan structure which is on page 400 of the budget. The City Manager has authority to provide adjustments to ensure equity between and within ranks, and command in Police and Fire are good examples of where that may occur."

According to the City, some employees did not receive equity increases, because "they were already paid at or more than the applicable rate."

Despite the FOP's support of command staff increases, Ortiz said she believes in transparency.

"Personally, I think it should be something that everybody knows because obviously, the public is paying for this," she said.