Most who applied for housing assistance are still waiting for help

The Housing Opportunities and Prevention of Evictions (HOPE) Program is meant to help struggling families pay rent and utilities, but most haven't received it yet. 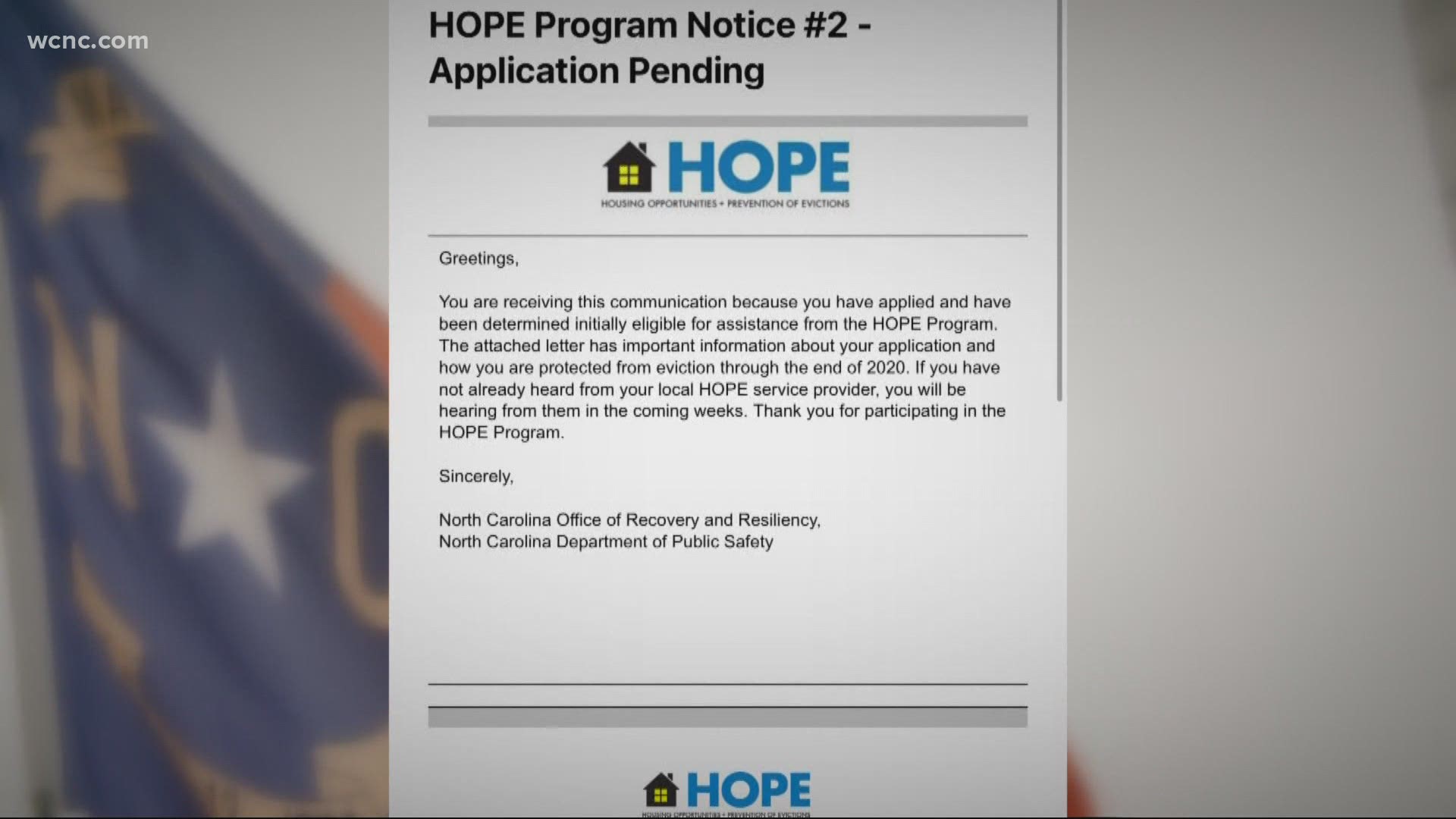 CHARLOTTE, N.C. — Thanks to an extended moratorium, landlords can't evict renters until the end of January 2021, but while that extension buys tenants more time, thousands are still waiting for the state to deliver rental assistance two months after they first applied for help.

North Carolina created the Housing Opportunities and Prevention of Evictions (HOPE) Program in October as part of an effort to help those financially struggling pay their rent and utilities.

However, of the 42,000 eligible people who applied before the Nov. 11 deadline, the North Carolina Office of Recovery and Resiliency reports only about 7,600 households have actually received HOPE money so far. The agency reports another 9,300 have received approval and are awaiting payment.

"To date, the program has awarded about $57.3 million assisting approximately 16,900 households," Office of Recovery and Resiliency Communications Director Bridget Munger said. "Of that amount, $27.2 million for about 7,600 households is at the payment stage, with those numbers increasing daily."

Jamie Stocker received initial eligibility approval in November but said she hasn't received any follow-up from the state since.

"I applied in October; it's almost Dec. 31 and still no phone call," the single mother said. "I understand that the HOPE fund is behind and they had a lot of recipients, I just hope they're able to get to everyone before actions are taken."

"I lost about 90% of my commission payout and I live off of commission," she said. "I have no one to fall back on except the state."

After North Carolina Gov. Roy Cooper announced the new program in October, a staggering 42,000 people applied for HOPE money in just a matter of weeks. The influx of applications forced the state to recently hire 150 new staff members to speed up the process.

"Eligible applications are being processed as quickly as possible, while still meeting all requirements for use of the federal funds," Munger said.

RELATED: ‘I’m not going back on the streets’ | Charlotte couple fearful of eviction once the moratorium ends this month

Back at Stocker's home, she can only imagine what a difference HOPE money will make if and when it comes through, assuming her landlord even accepts it.

"I'm just hoping that everybody who needs help gets it and we can get through this," Stocker said.

After we alerted the state about Stocker's concerns, a spokesperson assured us "HOPE Program management has been alerted" and "will be following up with her."