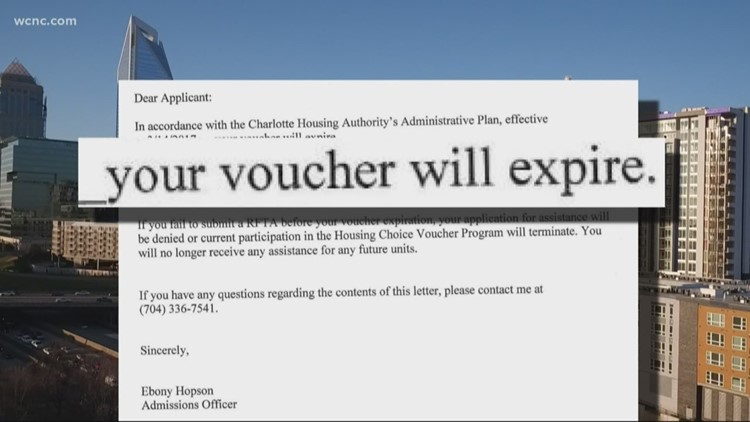 "On the federal level, we are going to have to expand the program, so that it can be expanded in cities like Charlotte," she said Friday. "Charlotte cannot issue vouchers that they don't have."

Her call for action follows an NBC Charlotte investigation that found the federal government has given far less rental assistance to people in Charlotte compared to other cities, including cities that are the same size and smaller.

"I'm always frustrated to see we have people who don't have places to live who certainly deserve to have a decent, affordable place to live," Rep. Adams said.

U.S. Department of Housing and Urban Development records show Charlotte, one of the largest cities in the country, has failed to get its fair share of housing vouchers.

As it stands, more than 13,000 people in Charlotte are on a waitlist for vouchers with almost no hope of actually getting the financial housing help they need.

While other cities have waitlists too, they have an edge over Charlotte in that they can help more people thanks to a larger pool of federal vouchers awarded decades ago based on now-outdated community needs.

Rep. Alma Adams said it's time for that to change. She said she hopes Congress will make expansion "a key priority."

"I think we can do better. We have to do better," Rep. Adams said.

Citing our numbers, the House Financial Services Committee member first pressed HUD Secretary Ben Carson in May, just days after our initial investigation found a third of all vouchers in Charlotte expired before people could use them.

While both Carson and the congresswoman said they believe a federal income source discrimination ban may be necessary at some point, they both also acknowledged there are not enough housing vouchers nationwide.

The Center on Budget and Policy Priorities estimates there are only enough vouchers to help one out of every four families who qualify.

"Would I love to be able to give a lot more? Of course," Carson said at the oversight hearing in May.

The Charlotte Housing Authority reports the agency has secured just 632 new vouchers in the last decade, but CHA can only give those vouchers to people with special circumstances like veterans and people with disabilities.

As the congresswoman now pushes for more voucher funding in Washington, DC, CHA's board recently changed its policy to give people lucky enough to secure vouchers more time to actually use them.

This story is part of the Charlotte Journalism Collaborative's efforts to report on solutions to the city's affordable housing crisis.