How can you help the homeless living in Charlotte's 'Tent City'? Advocates say vote YES on the Housing Bond.

“There are underlying issues of why people are experiencing homelessness and nearly all of it points to housing." 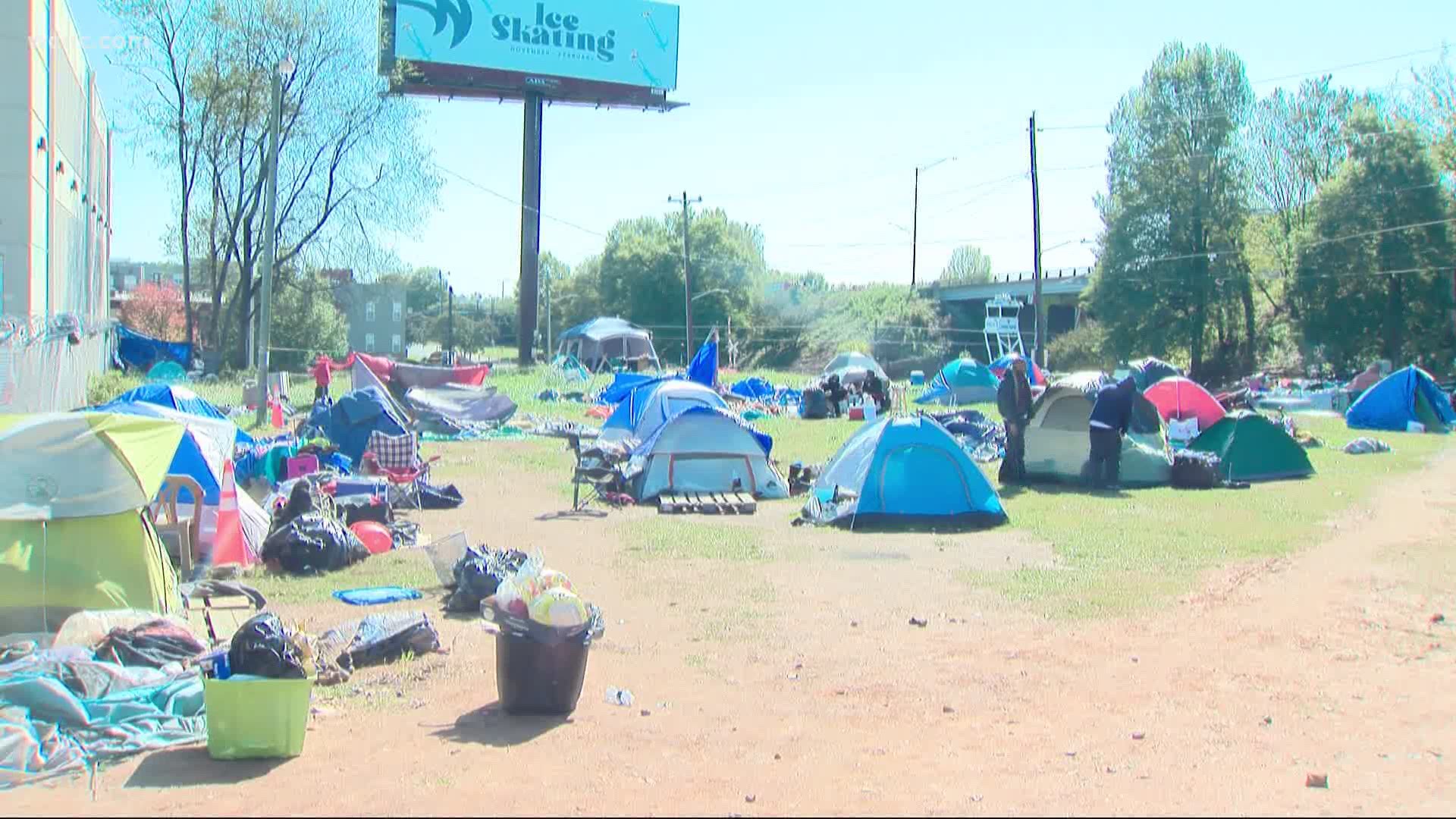 CHARLOTTE, N.C. — As overnight temperatures start dipping into the low-to-mid 30s in Charlotte, those who call Charlotte’s "Tent City" home are faced with more nights without a warm place to sleep.

Even before COVID-19, shelters across the city were at or near capacity. Now, in the midst of a pandemic, some programs including Room in the Inn have been forced to cease operations due to health and safety concerns.

“I didn’t freeze to death but it’s very cold out here right now,” said Sheila, a woman who WCNC spoke to as she was walking near what’s been dubbed ‘Tent City’ in uptown Charlotte.

Sheila asked WCNC not to share her last name, saying life on the street as a single woman is challenging.

“It’s not easy, I mean you have to really be cautious everywhere you go, you get harassed,” she said.

Sheila said she found herself on the street after being laid off from her job and unemployment payments ran out.

She said last winter, she survived the coldest nights by taking advantage of Room in the Inn, a program operated A Roof Above.

“We have typically more than 100 partnering organizations, mainly congregations, “ said Randall Hitt, the chief engagement officer at A Roof Above. “They come to our day services center, pick-up anywhere from six to 20 people, bring them back to their home sites, and shelter them for the evening.”

Sheila said it’s a program that always made her feel safe.

“Get your clothes washed, eat a good meal, it was wonderful, but now we’re not going to have that, and you can just see what it’s going to look like out here,” she said, pointing to a nearby lot with dozens of tents scattered about.

Due to concerns around COVID-19, Hitt says ultimately the organization decided it was safest not to operate this year.

“Unfortunately, what we were finding is a good number of those sites really were not comfortable given the van transportation, given the volunteers being of older age,” he said.

The Salvation Army’s Center of Hope is another Charlotte shelter that houses women and families, but COVID-19 has impacted it as well, shrinking its capacity down to 50%.

“Well for us, we were crowded before the pandemic hit,” said Deronda Metz, the center’s director.

“Now we have 467, but we only have 200 here,” she said, referring to their Spratt Street location. “The other 267 are in hotels, there are four different hotels throughout the city.”

Metz said this was made possible by a partnership with Mecklenburg County and the City of Charlotte.

She said thanks to CARES funding, the Salvation Army has been able to ramp up efforts to get more families into short-term housing, where they’re able to help a family pay rent for at least a year and get on their feet. This, in turn, also helps free up space at the shelter.

“We don’t have a lot of space, so we anticipate running out of space,” she said, referring to colder months ahead.

Metz has been working in her field for 30 years and says Charlotte’s homeless population isn’t growing, rather COVID-19 has made the issue more visible.

Still, Metz anticipates an increase in demand for shelter once evictions are allowed to resume in January.

In anticipation of needing more space, as of December 1, Metz says the Center for Hope plans to offer 50 additional beds — all part of an expansion at the Spratt Street location.

“Pre-COVID we had no intention of expanding this shelter, we were looking out to the future knowing that we had other needs, but COVID is sort of dictating our needs,” she says.

A Roof Above says they too are planning to expand the capacity of both shelter beds and beds at an overnight, overflow winter shelter.

“Shelter beds, means someone who’s actually brought into our shelter system, the bed that they have remains to be their bed, they don’t have to enter a lottery every day to get it,” he said. “So we are simply adding some beds to our N. Tryon shelter location, we are adding beds to a sheltering motel that we currently have, we’ve also got a dorm-like setting that we have extra beds where we did not have that last year so if you add that together it really increases our shelter beds.”

Hitt said pre-COVID, their shelter programs served just over 500 men. He said this year they expect to serve 16 to 17% more this winter, adding that the overflow winter shelter will provide 130 additional beds alone.

Given the unusual needs of the homeless this year,  A Roof Above and the Salvation Army’s Center for Hope recently announced a partnership. Together, they’ve been working to help those living in 'Tent City.'

“At the shelter we’re here receiving people, welcoming in people as they come off the street, now we're on the street in partnership with Roof Above talking to people who are unfortunately living outside in tents, with the goal of getting them inside the shelters before the weather gets too cold,” Metz said.

Asked how the community could help, both had similar answers, saying donations of any kind are always welcome. But both also agreed that to see real change, we must address Charlotte’s affordable housing crisis.

A Roof Above says the city is short 23,000 affordable units.

“There are underlying issues of why people are experiencing homelessness and nearly all of it points to housing,” Hitt said. “There’s a lack of affordable housing, there’s a lack of the right type of housing, and I think the more people understand it they can help shape public policy.”

Specifically, Hitt says people can support the homeless, by voting YES on the housing bond on the 2020 ballot.