In an effort to diversify neighborhoods, Charlotte leaders are discussing an ordinance that could reshape your neighborhood. Here's what could be built next door. 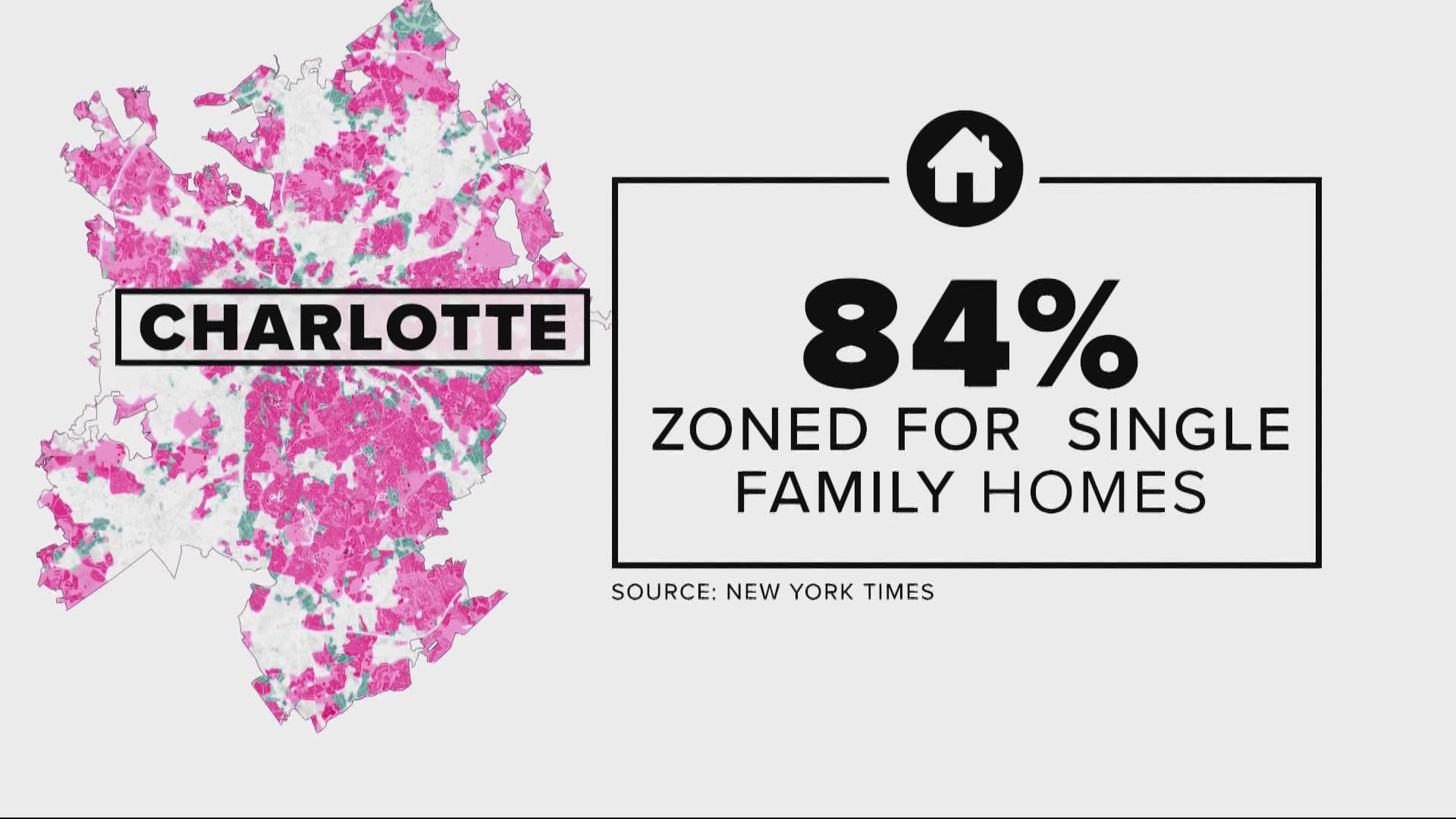 CHARLOTTE, N.C. — It's something you likely don't care about until it impacts your neighborhood: zoning. However, Charlotte leaders are working on a plan that could transform 84% of neighborhoods in the city and they're asking for your input.

The plan, called the Unified Development Ordinance, may not pull you in. Quite frankly, zoning is its own language that can be difficult to translate.

But it's crucial to the shape of a city.

"In a lot of ways, it's the most important thing that local government does," Ely Portillo, assistant director of UNC Charlotte Urban Institute, said.

He's studied and written about Charlotte's rapid growth and development for years.

"It'll change how our neighborhoods are shaped," Portillo added. "It'll change the city that our children grow up in."

Under the UDO, single-family-only zoning would be eliminated.

"About 84% of the residential land in Charlotte is zoned for only single-family houses," Portillo said.

In an effort to diversify and possibly make housing more affordable in every neighborhood, city staff wants to allow duplexes and triplexes to be built in current single-family home neighborhoods.

"There is a belief that that will help lower things like segregation and the cost of housing," Portillo explained. "In the post-war, suburban-auto era, we tended to build just single-family or just large apartment buildings, so there's a desire to see those mixed in more together."

Fourplexes would also be allowed on all lots facing arterials where single-family detached dwellings are permitted if there's an affordable housing aspect to them.

It's a way the Queen City can create more density as she quickly outgrows her crown.

However, the advantages come with controversy, Portillo added.

"Nearby residents often have concerns about traffic, property value, the effect on neighborhood character," Portillo explained.

Currently, there are only 5,631 multi-family homes in the city, a third of which were built in the 1950s, according to data provided by the City of Charlotte.

On Monday night, city council members were already skeptical and some were worried the public doesn't know single-family zoning is at risk.

"There are concerns with the single-family and density piece," Councilwoman Victoria Watlington added. "When we talk about increasing density or allowing an increase in density, or incentivizing it to get 70% average median income (AMI), in many cases it's going to be rental."

"It is driving out not only opportunities for home ownership, but also raising the local market-rate. So, those are some of the things that exacerbate instability in already vulnerable neighborhoods," Watlington continued.

City council was not pleased about the plan, or the Comprehensive 2040 plan which would work hand-in-hand with the UDO, on Monday night.

They do not seem poised to be in a rush to vote for either.

Portillo said it's a crucial time for Charlotteans to be a part of the discussion and make your voices heard before a vote is taken.

"These kinds of esoteric rules have really concrete effects on your life," he said.