Charlotte workers go on strike, demanding at least $15 an hour

The minimum wage was last increased in 2009 to $7.25. Workers across North Carolina are demanding better pay immediately. 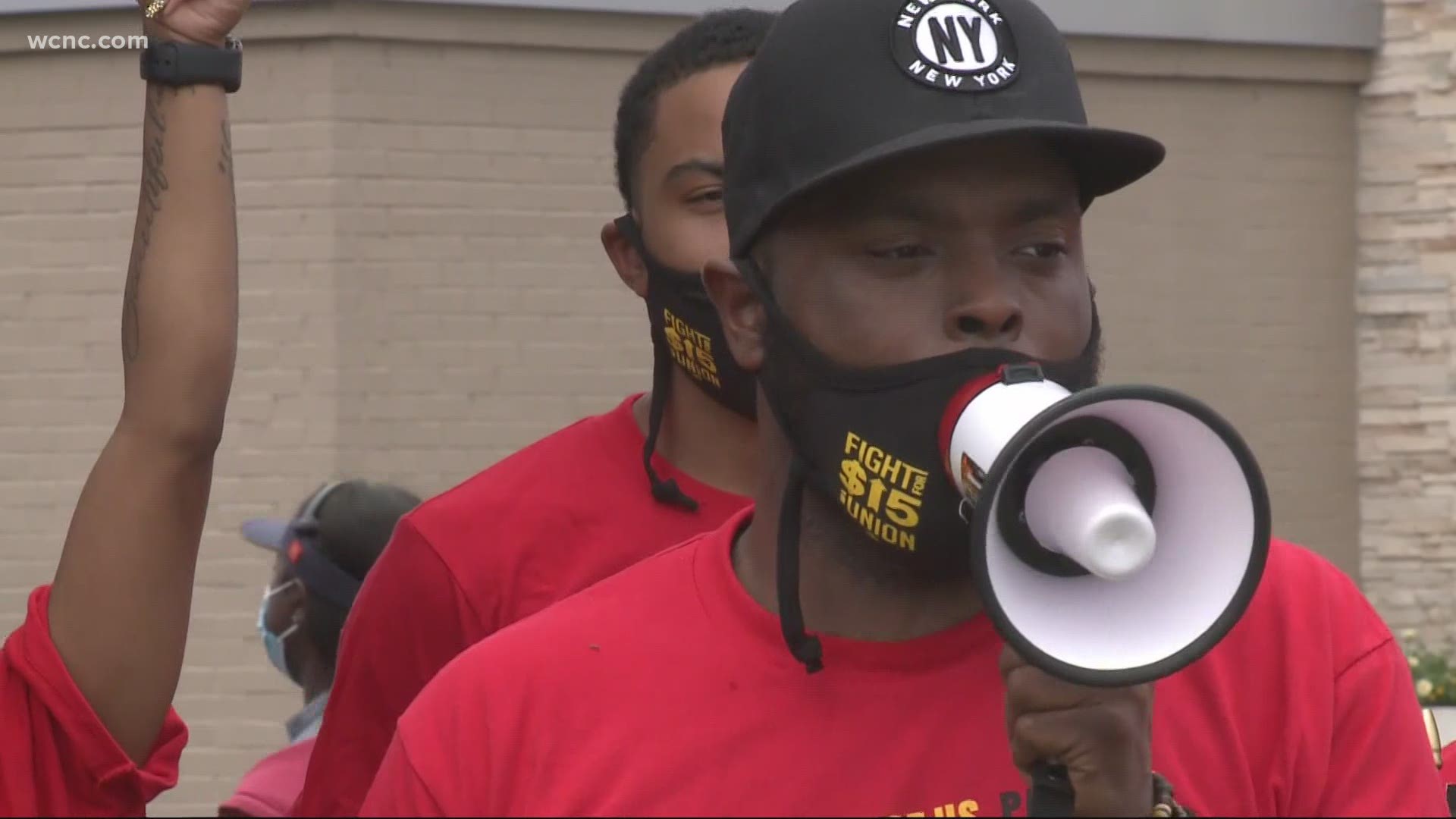 CHARLOTTE, N.C. — Fast food workers in Charlotte held a protest Tuesday, demanding a minimum wage of at least $15 per hour.

The current minimum wage in North Carolina and South Carolina is $7.25 per hour, according to the U.S. Department of Labor. Protesters gathered outside restaurants in Charlotte, Durham and Marion. The goal of the protests is to raise awareness for pay increases for service industry workers. The Carolinas are among 20 states with a minimum wage of $7.25, the lowest allowed.

"It's been 12 years since the minimum wage went up. Every year without a raise, things get worse for workers," said Precious Cole, a worker at a Wendy's restaurant in Durham. "Poverty goes up. People's mental health gets worse, because making poverty wages can really wear you down mentally."

“We know we need it, we haven’t had one since 2009," said North Carolina Rep. Pricey Harrison. "It is impossible to live on $7.25 and certainly raising a family on that is impossible.”

Harrison said getting it passed is an uphill battle.

“I don’t think there’s a Republican-led legislature that has passed a minimum wage increase in the past few decades," Harrison said.

"The Republican Party strongly believes in the free market economy and the private sector has shown it can internally adjust to a changing workplace demand," said Sarah Reidy-Jones with MeckGOP. "Minimum wage is meant to be a stepping stone and we encourage other incentives than doubling entry-level wages to $15 to get North Carolina back to work."

Harrison says there’s a chance the worker shortage and pandemic could help sway opinion for the raise.

"We realized during the pandemic how important essential workers were and we should recognize that and give them access to the minimum wage they need,” Harrison said.

As the country continues to recover from the pandemic, many restaurants have tried increased wages, signing bonuses and other perks to attract workers. One Charlotte restaurant has gone so far as to add a 23% service charge to all bills so they can pay a living wage to employees.

Many of these companies, including McDonald's, have reported a nationwide shortage of workers. Earlier this year, McDonald's announced it will raise pay for workers in its 650 company-owned stores to an average of $15 an hour by 2024. Entry-level employees will make $11 an hour.

One Charlotte staffing agency said the shortage is due in part to increased federal and state unemployment benefits during the pandemic.

Allen Tuttle, the director of operations for Allegiance Staffing, said his clients have raised wages and offered additional incentives to new hires. He said in today's market, companies are no longer only competing against others in their industry, but against everyone.