Brittany Patchey made an honest mistake on her unemployment claim. Someone else received $2,400 in benefits as a result and then spent her money. 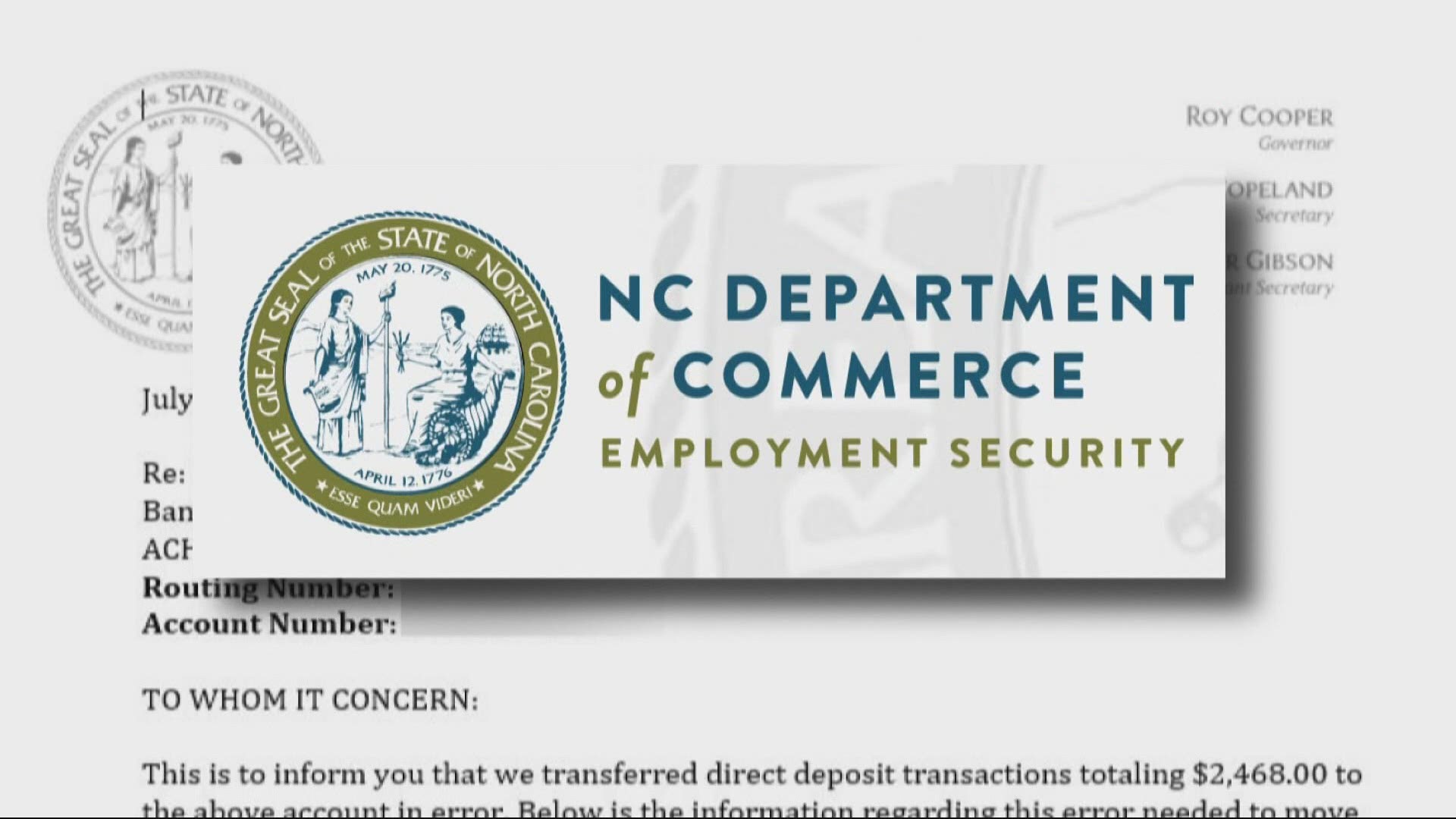 CHARLOTTE, N.C. — An honest mistake in the unemployment filing process resulted in a Charlotte woman's benefits going to someone else. That person then spent her money.

"It was devastating," 25-year-old Brittany Patchey said. "Obviously, you kind of panic and say, 'What can I do to fix this?'"

Over the agonizing five months that followed, Patchey learned there wasn't an easy fix.

"It upsets me so much," her mother Debbie Patchey said. "My heart hurts for her."

Patchey works as an office assistant for an area orthodontist. She temporarily lost her job during the first month of the pandemic, so she filed for unemployment, but for weeks, her benefits didn't arrive. At first, she couldn't understand why.

"I was already struggling, because I was obviously out of work and I was scared, because I started to wonder, 'How am I going to pay my bills?'" she said.

Eventually, the reason became clear. She made an error when she filed for unemployment. The bank account number she provided the state was off by two numbers, so the North Carolina Division of Employment Security deposited her $2,400 into someone else's account  In the months since that discovery, she has only received one $442 check. The consequence of her mistake, meanwhile, has depleted her savings.

Once Patchey realized the error, she and her mother both alerted the state and her bank.

Of all the ⁦@NCDES⁩ issues I’ve covered, I worried this one would be the most difficult to resolve, but then...a surprise Monday! Looking forward to sharing how Brittany’s money ended up in someone else’s account & what we all can learn at 11 on ⁦@wcnc⁩ #defenders pic.twitter.com/IGcl7CIroj

"We were both really extremely upset," she said. "How else can you feel when something like that happens?"

The longer the situation dragged on, the more challenging undoing the mistake became. By all accounts, the person who wrongly received the money spent anywhere from some to all of it without ever saying a word, which makes getting the money back even more difficult.

"Wouldn't you say something? " Patchey asked. "And then to go and spend it? Yeah, I'm angry for sure. I'm more than angry to keep it polite."

"This is an unfortunate situation that resulted from Ms. Patchey entering the wrong account information on her unemployment claims," the bank said in a statement. "When Ms. Patchey notified us of the issue, we requested that she work with the NCDES to retrieve the funds, as the bank is unable to debit or freeze a client's account without proper investigation. In addition, the bank's Deposit Agreement specifically places responsibility on the customer to correctly identify the account that funds should be deposited into, and any losses as a result of an improperly identified account are the responsibility of the customer."

Patchey remained stuck in the middle until Monday. A week-and-a-half after we started asking NCDES and her bank questions on her behalf, Bank of America made an exception for her case.

"...since months have passed with no resolution, as a courtesy we are crediting Ms. Patchey's account for the two unemployment benefit direct deposits," Bank of America said.

By the end of Monday, Patchey's $2,400 were in her bank account. A welcome surprise, considering she thought she'd never see her money again.

"I am super excited. Let me tell you this is probably the best way to make a Monday morning," Patchey said smiling. "The stress and the weight off my shoulders, it's so real."