The events come one day after a memorial service was held for George Floyd in his hometown in Hoke County, North Carolina. 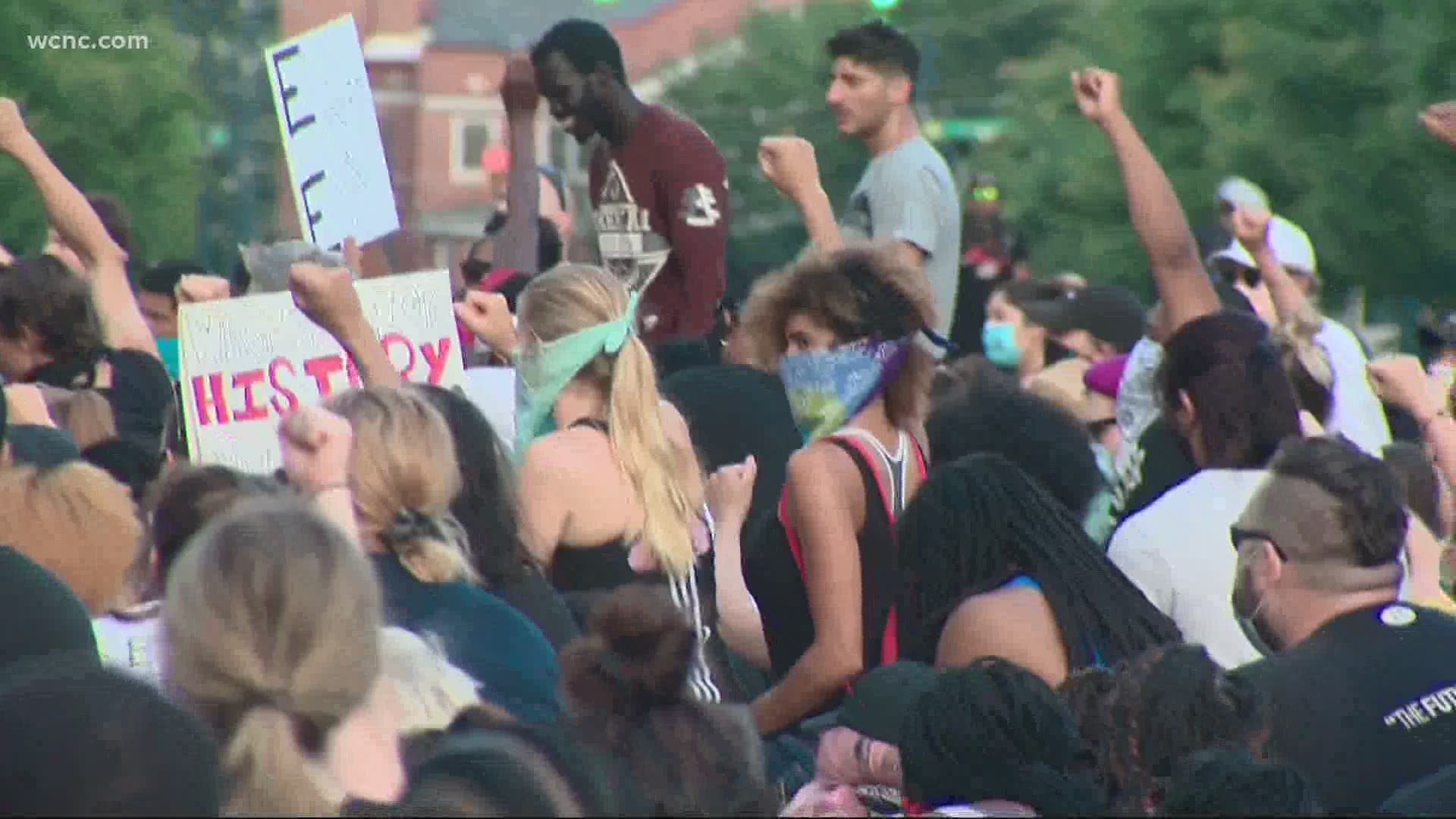 CHARLOTTE, N.C. — A memorial was held at Marshall Park in uptown Charlotte Sunday evening for George Floyd, nearly two weeks since he died in Minneapolis Police custody. Earlier in the evening, many in the Charlotte community gathered at Romare Bearden Park to peacefully protest.

It comes one day after a memorial service was held for Floyd in his hometown in Hoke County, North Carolina.

The Charlotte-Mecklenburg Police Department said that shortly before 10:30 p.m., protesters began "physically shoving" an officer who was walking with them on 4th street, leading to other officers extracting him. Police said in that instance, pepper spray was used against a few people.

As of 11:30 p.m., CMPD said two people had been arrested, and one officer was injured. In a tweet, CMPD said in a tweet that Captain Brad Koch "fended off an attack" by protesters, and was helped by other protesters until officers arrived. It's not clear if these two are in reference to the same incident.

CMPD shared video of the incident on Twitter, showing officers on bikes arrive within a minute.

Editor's Note: This video may contain some explicit language.

Prior to this, the day was filled with peaceful demonstrations throughout the city.

Protesters gathered in Romare Bearden Park Sunday afternoon, then headed toward the Charlotte-Mecklenburg Police Department headquarters. Ryan Baker organized the event — she said the goal was to make their voices heard.

"We just want to make sure that we were taking a firm stance on where we stand," Baker said. "A lot of people have been protesting and walking around but we plan to rally at CMPD headquarters and say we're not going anywhere, we're not going to stop until you guys stop."

She said they want to make sure they're using the time to make an "impactful statement." Baker also said she feels the reason George Floyd's death caused so many protests around the country was that the video was spread online almost immediately.

"The rest of America was able to see immediately what we've always seen, that police overuse and abuse their power and that they blatantly murdered a black man," Baker said. "People were able to feel that rage that we've been feeling for years and years and years."

Then across uptown Charlotte, dozens gathered for a memorial in Marshall Park.

WCNC Charlotte's Lexi Wilson said you could "feel love" at the event, which offered an opportunity for many to reflect on what happened in Minneapolis and what's happened across the country since then.

Several paintings, signs, and photos representing George Floyd and others including Ahmaud Arbery could be seen resting against a fountain at the park.