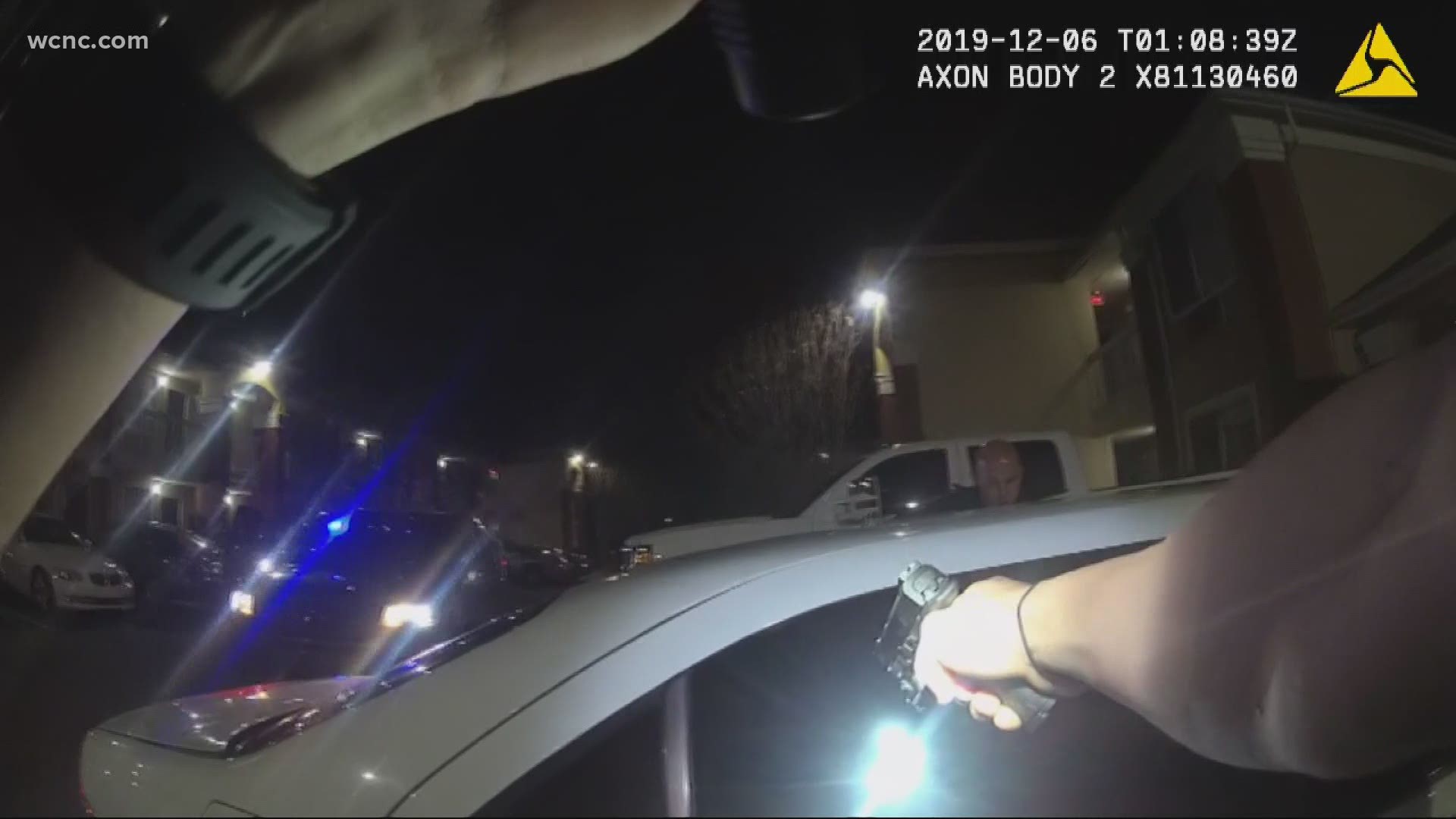 CHARLOTTE, N.C. — Three Charlotte Mecklenburg Police Department officers have been cited following an internal review into the 2019 arrest of a man in west Charlotte. The incident was captured on several body cameras worn by the officers, videos of which were released Thursday morning.

On December 5, a CMPD officer attempted to pull over a white vehicle on Billy Graham Parkway that officers said had a fake license plate.  According to police, the driver refused to stop before eventually pulling over in the parking lot of the Extended Stay Hotel on Yorkmont Avenue.

Officers said the driver refused to open the door or roll down the window to talk to officers.  Officers can be seen in the body camera video using force to break the vehicle's window.

The driver, Anthony Caldwell, was arrested and charged with failing to heed blue lights and siren, resisting a law enforcement officer, driving with a license revoked, operating a vehicle without insurance and displaying a fictitious license plate.

Upon his release from jail, Caldwell took himself to the hospital due to an injury to his arm.  According to a release from CMPD, he had suffered a fractured elbow during his arrest.  Caldwell filed a complaint against the police department for the injury.

During an internal investigation into the incident, the body cameras of all the officers involved in the incident was reviewed by supervisors within the department. Investigators also reviewed video footage from a witness at the scene that night.

In April, an Independent Chain of Command Review Board concluded the manner in which the officer who arrested Caldwell managed the encounter violated CMPD's Conduct Unbecoming policy. The officer received an 80-hour unpaid suspension, was reassigned from his specialty unit, and is ineligible for promotion for two years.  His name was not released by CMPD.

During a press conference, CMPD leaders were questioned about the actions of the officer on the night of the arrest.  While the investigation found the officer's actions were justified, the department took issue with his behavior and language, which the department said, amplified the situation and did not de-escalate the situation.

The investigation also found, two additional officers also violated department policy during the arrest.  A separate internal review was conducted on those officers.  The review found one officer accidentally closed a police vehicle's door on Caldwell's foot and failed to report it.  That officer received a 24-hour unpaid suspension.

A sergeant on the scene also violated CMPD's Rules of Conduct, according to the view board. The investigation found he did not speak with Caldwell when Caldwell requested to talk to a supervisor.  The sergeant received a written reprimand for that violation.

Following the conclusion of the investigations, a Superior Court Judge granted the release of all body-worn camera videos associated with the incident.

Other body cam video from two other incidents involving officer-involved shootings were also released Thursday.  In both of those incidents, internal review boards determined the actions of both officers were justified.

"What we are seeing in these videos are officers reacting to very rapidly evolving situations. High stress, high duress and instances they are engaging in very lifesaving work that's necessary," said Lieutenant Steve Fischbach.

In a release Thursday morning, CMPD said it will continue to hold officers accountable when their actions violate department policy.

In total, CMPD released over 100 videos Thursday totally of 32 gigabytes worth of computer data. WCNC Charlotte is reviewing the videos and will provide updates as the material is processed by our journalists.