The Charlotte-Mecklenburg Police Department held an impromptu press conference Tuesday afternoon to address "egregious charges" made against a member of their team. 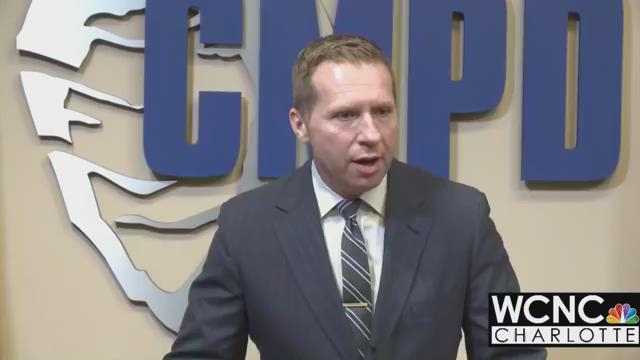 CHARLOTTE, N.C. -- The Charlotte-Mecklenburg Police Department held an impromptu press conference Tuesday afternoon to address "egregious charges" made against a member of their team.

"We as a department try to get out in front of things when members of our team do exceptional work," a CMPD official said. "We need to be just as vigorous and interested in getting out in front when a member of our organization falls short of expectation."

The charges were made against the officer by a now 17-year-old Nevada resident who claimed he sexually assaulted her when she lived in Charlotte between the years of 2010 and 2013. CMPD noted the alleged incidents occurred when the officer was off duty.

CMPD detectives traveled to Nevada earlier in the week to interview the victim. They interviewed Porter Tuesday morning, then placed him under arrest.

CMPD said Officer Porter was allegedly a family friend of the victim. He is a helicopter pilot for CMPD and has been placed on un-paid administrative leave.

"I am disappointed that one of our officers is accused of this very serious offense," CMPD Chief Putney said. "We represent the law and absolutely will not tolerate one of our own violating it. It's our job to protect this community. We have no place in our ranks for anyone who would violate the trust of a child in this manner."