The four Charlotte Mecklenburg Police Department officers, and one sergeant, voluntarily resigned before being formally terminated in the death of Harold Easter. 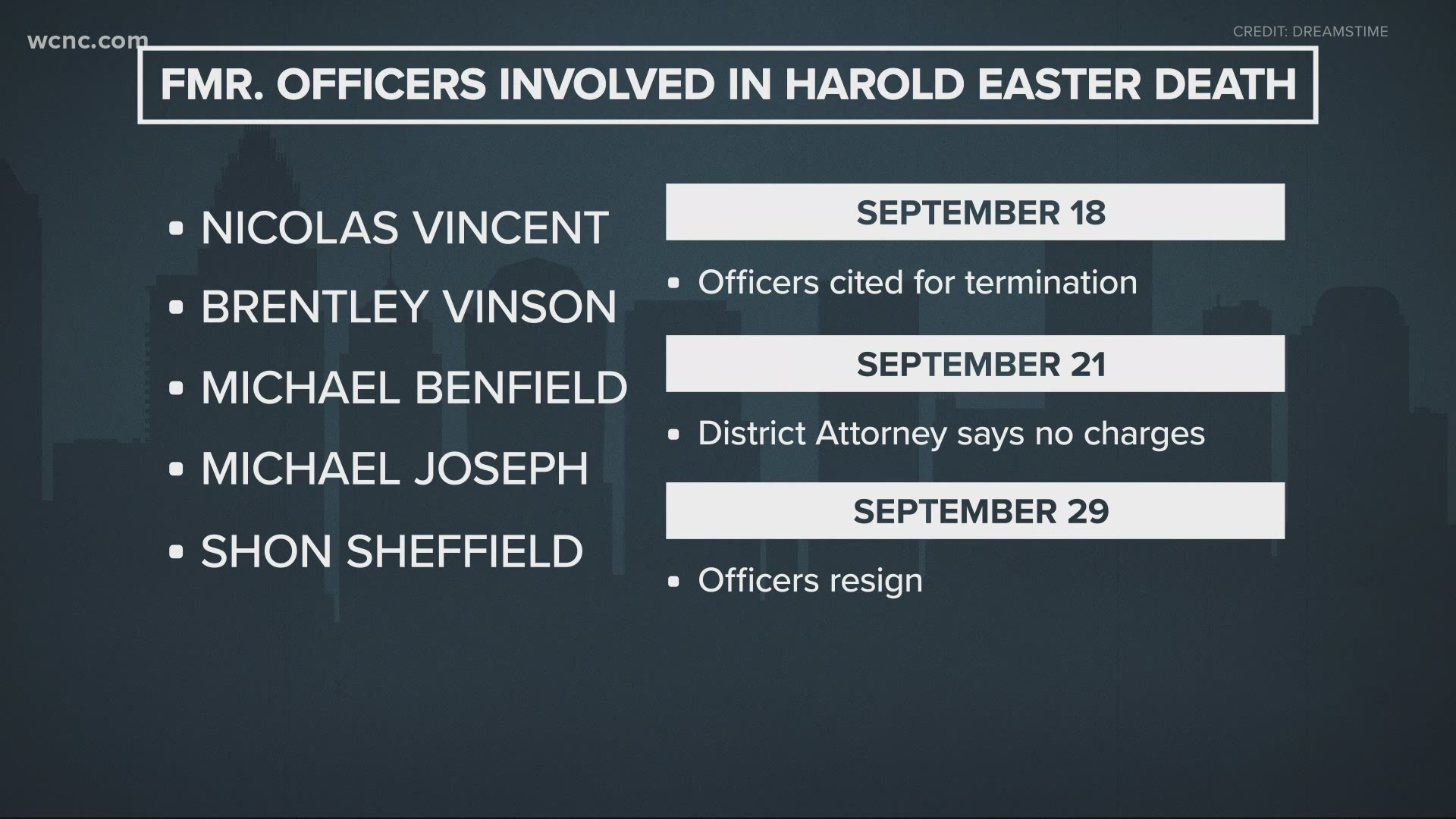 CHARLOTTE, N.C. — The four former Charlotte Mecklenburg Police Department officers and one sergeant who neglected to help Harold Easter as he feared he would die from swallowing cocaine, and who only stepped in roughly 13 minutes after Easter started to convulse, could all possibly be hired at another police department.

At a press conference on Thursday, CMPD Chief Johnny Jennings said the concern was out of his control.

"I don't have control over telling an agency not to hire one of these former officers," he said. "Any department that is seeking these officers for employment, will come to us and ask for personnel records and this will be reflected in their personnel records."

All five former law enforcement officers were recommended for termination by Chief Jennings.

The Civil Service Board, which oversees hiring and firing for CMPD, was going to hold a hearing and decide their fate. However, all of them resigned before that took place. Legally, nothing stops them from doing so.

RELATED: All five CMPD officers cited for termination for in-custody death of Harold Easter have resigned

Coming up tonight at 11:

-The Harold Easter body camera videos
-Protests in Uptown
-New NC #COVID19 numbers headed in the wrong direction before Phase 3
-Cool weather ahead
-And this:

See you soon on @wcnc pic.twitter.com/7WX7jcnZI5

"Anyone and everyone that has a position of trust to the public, should be held accountable," said State Representative Chaz Beasley, who represents district 92 in Mecklenburg County.

He said departments having the need to request previous personnel information from other departments isn't enough.

He offered a bill that would've created a statewide database for law enforcement agencies to share employee history information.

"If you've already had an opportunity to protect and serve, and you messed that opportunity up, then wherever you go next -- they should know," Beasley said.

The former CMPD officers will still get paid their pension, per Chief Jennings.

Chief Johnny Jennings says he is not aware of any officers who have been hired at CMPD after resigning from other departments.