Concord Police officer Jason Shuping, 25, was shot and killed while responding to a carjacking near Concord Mills Mall last week. He will be buried with full honors. The 25-year-old was shot and killed while responding to a carjacking near a Sonic Restaurant about a half-mile from Concord Mills Mall on Dec. 16. The suspect was also killed during the shootout and another Concord Police officer suffered injuries that aren't life-threatening.

Shuping, who became the first Concord Police officer to be killed in the line of duty, will have his unit number retired, Concord Police Department Chief Gary Gacek announced Friday.

"Jason paid the ultimate sacrifice for confronting evil," Gacek said. "Kaleb came close to doing the same. Cops like Jason, cops like Kaleb, cops like Paul and Kyle will do everything possible to protect you even when doing so puts their lives at risk and that's part of the virtue that makes you a cop."

"Jason and Kaleb confronted that evil," the chief added. "They made the decision to head toward danger. For someone they’ve never met. Consider that for a moment and let it sink in." 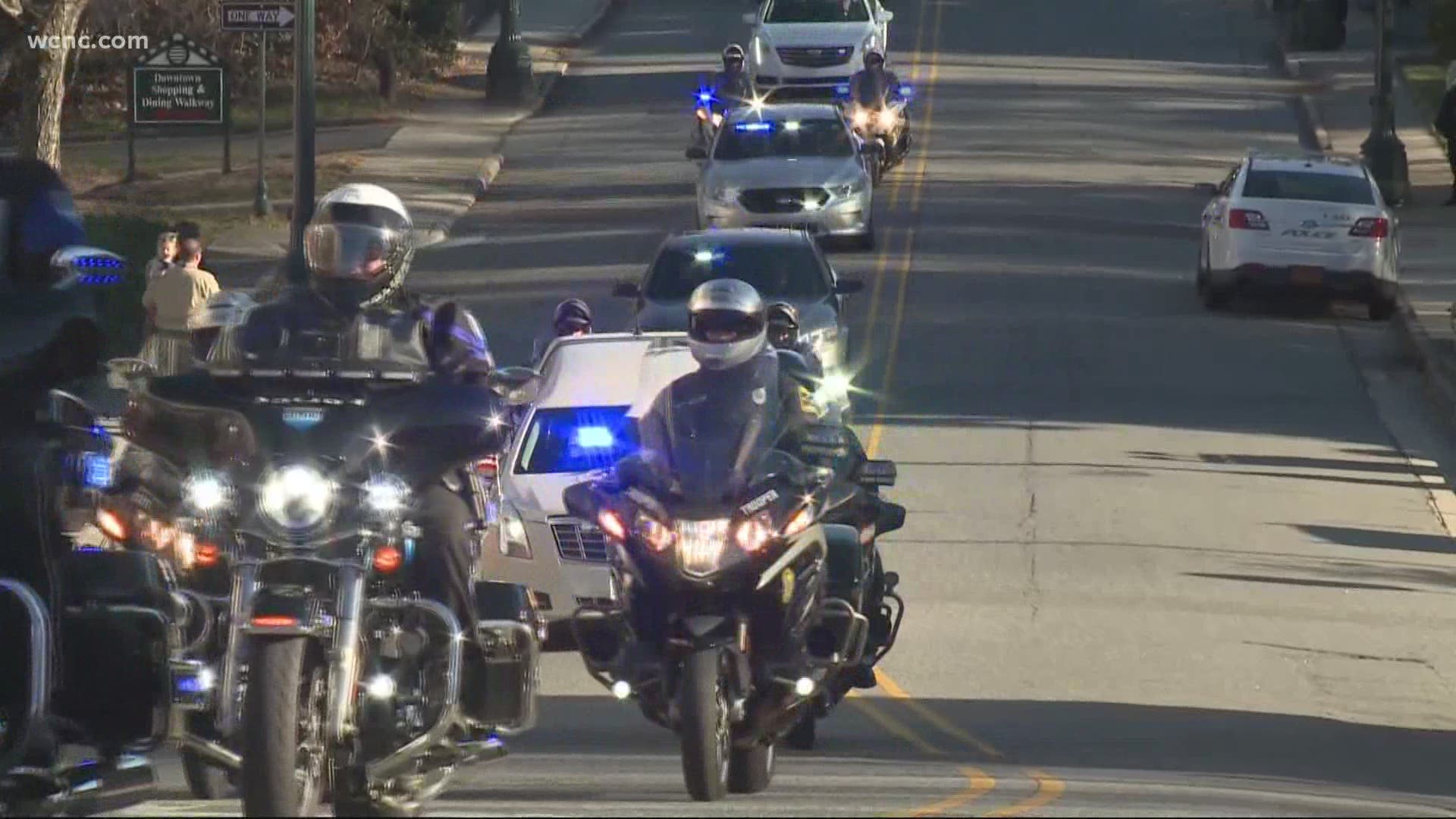 Shuping was the second officer killed in the line of duty in the Charlotte area this month.

The following Wednesday, Shuping were shot and killed in Concord. His colleague, Officer Kaleb Robinson, was shot and injured.

In an off-duty incident on Dec. 9, Kara Alsup, a 25-year-old deputy with the Rowan County Sheriff's Office, died in a hit-and-run crash on Interstate 85.

"We were honored to swear in Jason in 2019, "Concord Mayor Bill Dusch said Tuesday during the funeral service. " We could tell he was dedicated to protecting citizens and fellow officers."

Shuping's funeral service was held at the Cabarrus Arena and Events Center located on NC Highway 49 in Concord. Rev. Richard Myers was the officiant.

Shuping was known for his service to others -- he was awarded within the police department six times for acts of service in the community that went above and beyond.

Following the service, the procession for Shuping drive through downtown Concord, where the community stood outside the Concord Police Department to pay their final respects to the young officers.

In lieu of flowers, the Shuping family is asking memorials to be made to Shiloh Reformed Church of Faith, P.O. Box 308, Faith, NC 28041.

"Let's keep the legacy of this brave young man. Let's keep it alive and in our hearts and in our community," said Lonnie Clouse, the department's Chaplain.

Shuping was a 2014 graduate of East Rowan High School in Salisbury.

“He always had that perpetual smile on his face. What I learned very quickly is he was a very, very hard worker,” said Laurie Wyrick. She spent years getting to know Shuping as a member of the track team at East Rowan High School.

Wyrick said Robinson, who was injured in the shooting, also graduated from East Rowan High School. Classmates who became colleagues, both doing their jobs, protecting the community.