Concord Police believe a man pictured in a distinct hoodie may be responsible for the fatal shooting that killed a 13-year-old girl and injured two teenage boys. 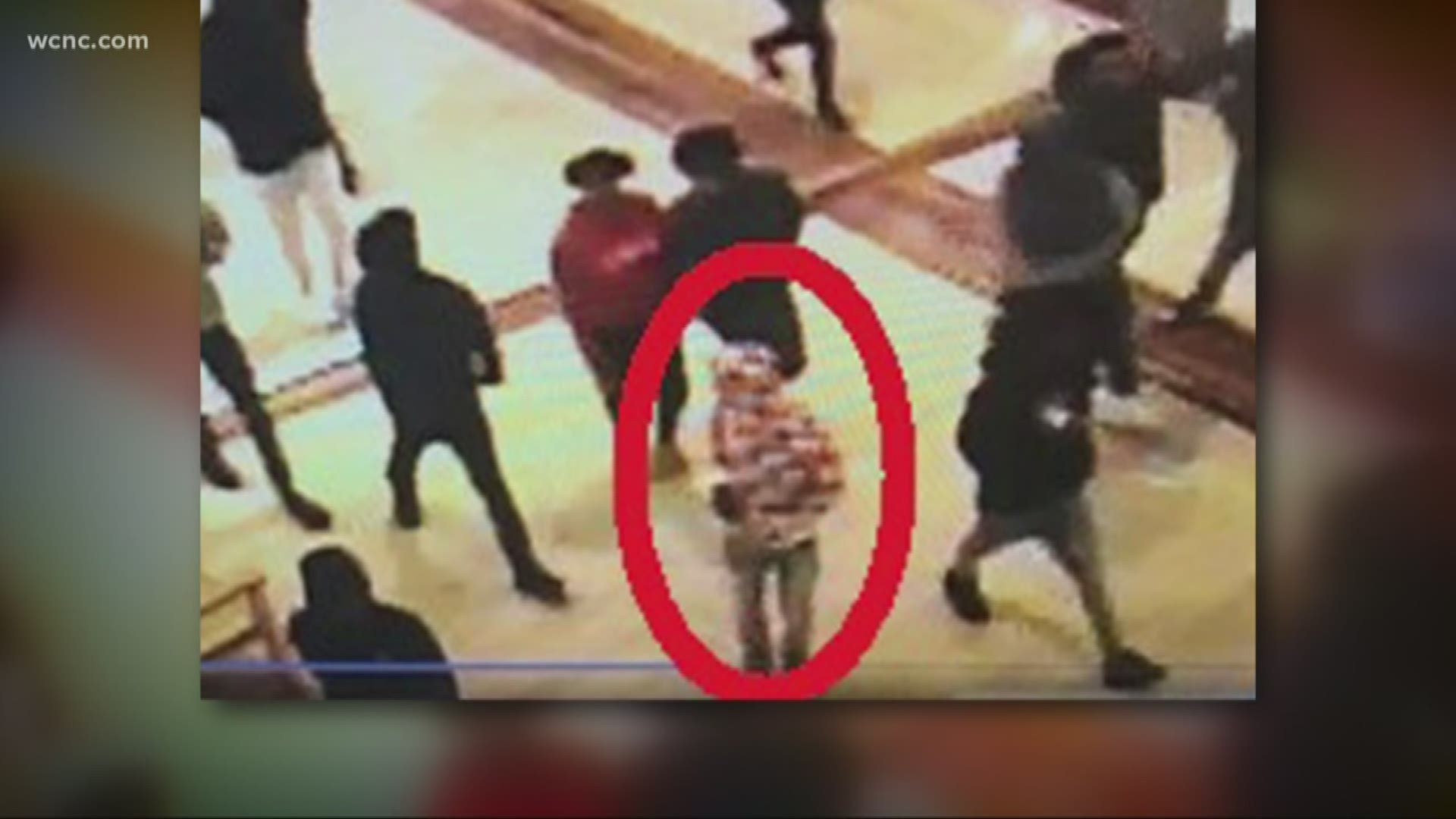 CONCORD, N.C. — One person has died and two people were transported after a shooting in the parking lot of Dave & Buster's at Concord Mills Mall. All three victims are 16 or younger.

Concord Police urged people to avoid Concord Mills after officials responded for a shooting call Saturday evening. The police department stressed there was not an active shooter situation, but said they would remain on the scene.

Police confirmed the victim as 13-year-old Aveanna Propst. She was pronounced dead at the scene. Her teacher told WCNC that Propst was an 8th grader at A.C.E. Academy public charter school.

A statement from her school said, in part:

"Aveanna was scheduled to graduate from our school this year and this is devastating to all of us. She was a popular girl in the school and the news spread quickly among our school family. She's a baby, she's 13-years-old. This is hard to process, accept, or even understand. We support our families in and out of school and anytime one of our children suffer, we all suffer. We will support Aveanna's family for as long as it takes to get through these painful, unimaginable times."

Cabarrus County officials confirmed that in addition to the girl's death, two boys were transported to CMC Main in stable condition. Both are believed to have non-life-threatening injuries. One boy is 16 and one is 15. Concord Police Chief Gary J. Gacek said in a tweet that the two "are lucky to be alive!"

It's not known if they were together. Concord Police said the victims were "possibly in the wrong place at the wrong time."

"This person that killed Aveanna should turn themselves in instead of running from the situation, instead of hiding," Massey said.

Massey said she will remember Propst as being kind, smart and confident in herself.

Concord Police first responded to reports of a fight outside the entrance of Dave & Buster's. As officers were responding, they received reports of gunfire.

Police obtained security footage that shows a person wearing a red and white checkered hoodie. Officials said that person was seen shortly before the shooting in the Concord Mills parking lot with a gun.

Witnesses told police that they saw him discharged the gun in the direction of Dave & Buster's. Concord Police released photos from the surveillance video. While they "lack the desired clarity," according to Concord Police, officials are hoping someone might recognize the man due to his unique hoodie.

“We are deeply saddened by the tragic incident that occurred Saturday evening outside the exterior entrance to Dave & Buster’s," an official statement from Concord Mills said, in part. "We are working closely with Dave & Buster’s and the Concord Police Department to further understand the nature of the dispute that took place inside Dave & Buster’s space which ultimately escalated outside of their entrance.”

Police set up an area at the parking lot of Sea Life Aquarium for parents to come and pick up their children. Parents must enter through the Carolina Lilly entrance, as all other entrances remained closed.

Concord Police are working on a suspect description that they are comfortable releasing, and are speaking with witnesses.

Mecklenburg Emergency Medical Services assisted by standby in the area in case any resources are needed.

Earlier in the evening, Concord Police said one person was shot multiple times in a separate part of Concord. Police said the victim later died from his injuries. He has been identified as Derron Jordan, 31. At this time, police don't believe that shooting had any connection to the fatal shooting at Concord Mills.

Anyone with information is asked to reach out to Concord or Cabarrus County law enforcement.

Stick with WCNC for the latest as this story develops.