Police say not only do people tend to carry more cash around this time of the year, but thieves know cars and homes are full of gifts. 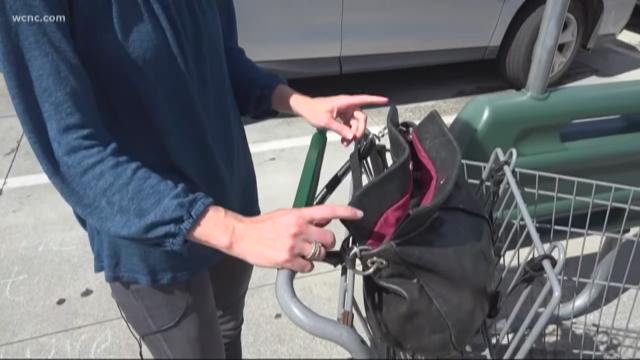 CHARLOTTE, N.C. -- The most wonderful time of the year for many — including criminals — is upon us.

Police say not only do people tend to carry more cash around this time of the year, but thieves know cars and homes are full of gifts.

Tuesday, Charlotte-Mecklenburg police said a woman had her purse snatched while leaving the Southern Christmas Show in Plaza Midwood and just last month, a woman had her wallet stolen while she shopped inside the South Park Whole Foods.

So how can help prevent yourself from becoming a victim? Captain Edward Turas with Gastonia Police says the first is staying alert.

“Vigilance is key. Understanding and keeping eye contact with what’s around you, where you’re at,” said Turas.

He says shopping safety begins when you first pull into the parking lot.

“It is worth your time to find the perfect parking space, back in first, under the lights and where there’s a lot of public movement,” Turas explained.

He says people who park far away from other cars, sometimes to avoid having their cars dented, are oftentimes the people who become victims.

Most obvious, but not always followed, Capt. Turas says always lock your doors and store purchases in the trunk, out of sight. He says once inside, resist the urge to place your purse in the cart. Once you leave, he recommends having your car keys in hand.

“Not carrying your items to where your hands are so loaded to where you can’t get to your keys so when you get to the car you’re having to manage time and space and you’re focusing on objects instead of on your surroundings,” said Turas.

Turas said if you do find yourself in an uncomfortable position in a store parking lot, there is no harm in heading back inside.

“If you see people coming up in groups and you don’t feel comfortable, move to the other side of the street, maybe find another couple in a different location or other people in a parking lot that you can move to,” he said.

Rock Hill Police and Charlotte-Mecklenburg Police have both said they’ll be increasing patrols around busy shopping centers and added that most businesses also increase their secondary employment of officers to assist with security as well.