The jurors seated for the Chauvin trial deliberated for less than 12 hours before reaching their verdict. 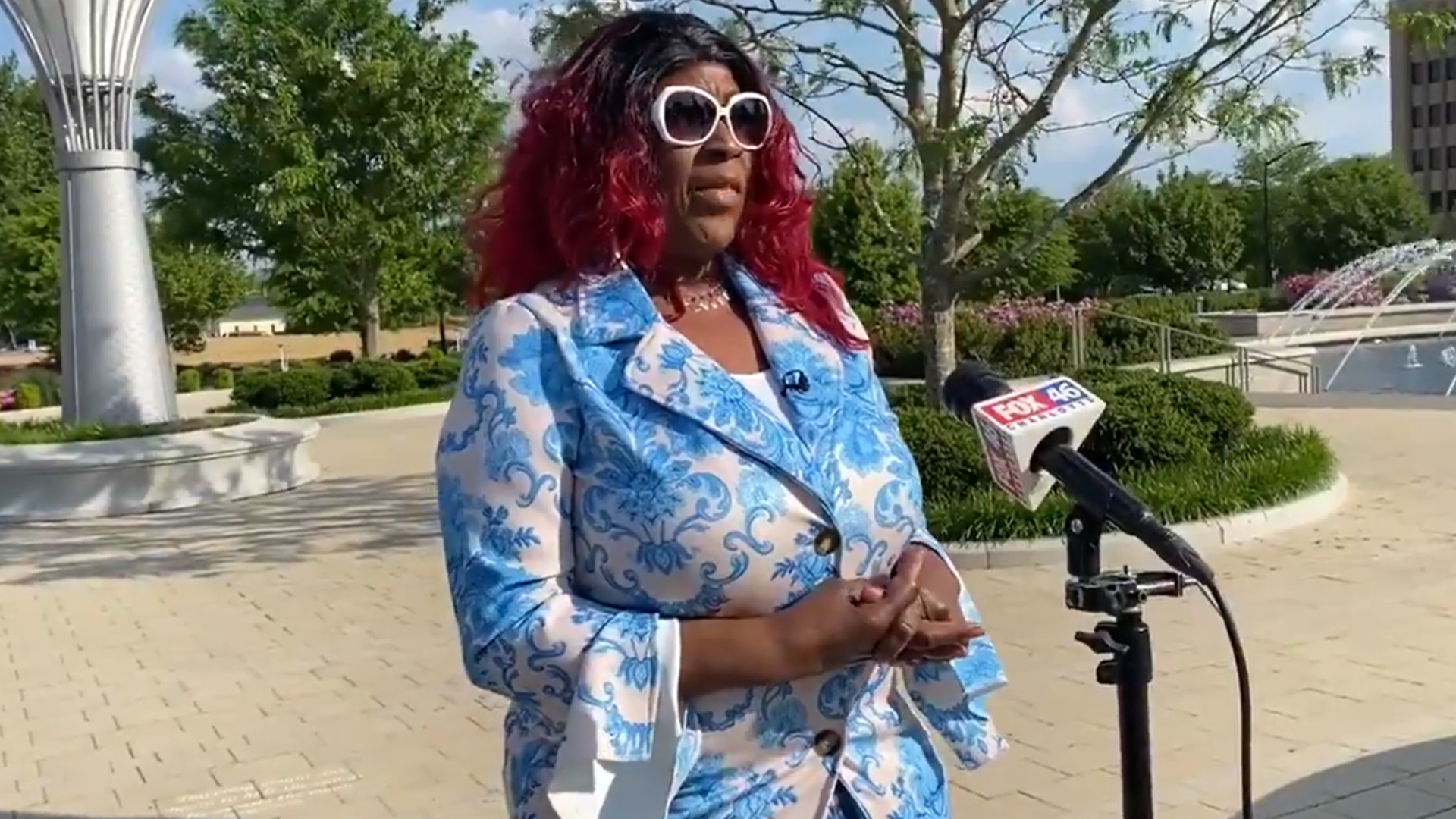 CHARLOTTE, N.C. — A Minnesota jury has found former Minneapolis police officer Derek Chauvin guilty of murder and manslaughter in the May 25, 2020, murder of George Floyd.

Moments after the verdict was read live on TV, people in Rock Hill gathered for a moment of prayer, reflection and meditation for the Floyd family.

Norma Gray, president of the Rock Hill NAACP, was at the gathering and said the jury's decision would not hold any weight if the country does not build on the momentum. However, she said she hopes it is a step toward trust.

"It's significant because at some point you have to be able to trust that there can be equality," Gray said. "And sometimes that's a difficult message to convey when all you see is inequality."

Gray also added that if Floyd could be there, he would say, "OK. I got justice, but what about Breonna Taylor? What about Daunte Wright? And what about the next mother's son, the next sister's sister? That is why we've got to keep the momentum."

President of Rock Hill #NAACP reacts to guilty verdict in #ChauvinTrial, says this decision won’t hold weight if this country can’t build on the momentum, but she hopes this is a step toward trust. pic.twitter.com/LdHnobMyhF

Corine Mack, head of the Charlotte-Mecklenburg NAACP, agreed the day's developments were a start, not the end, of the journey towards justice.

Mack would like to see the next steps entailing police reforms and new perspectives on what safe communities look like.

"It's important those millions of dollars going into policing, into law enforcement–we need to cut those budgets and put that money directly into communities," Mack said. "Ending chokeholds, ending door-knocks, ending qualified immunity–those are some of the important things -- ensuring that all officers de-escalate interactions and not escalate."

But as she looks to the possibilities of the future, she also reflects on the events of the past several months. Did Floyd's legacy live up to the declarations of his daughter Gianna in June of last year? Did he change the world?

"Our white allies – the white allies who have been really supportive and asked openly, 'What can I do to help?' Willing to listen in ways they've never listened before," Mack said. "They finally got it."

Ahead of the announcement of the verdict, barbers and clients in No Grease Barbershop were anxiously waiting together. When the judge read the guilty verdict for all three charges, there was an audible sigh of relief throughout the barbershop, according to WCNC Charlotte reporter Briana Harper.

Many of the barbers said it was critical that they watch that moment together as a group.

“It was very important because this is a place that everyone comes together, and we plan for the future and talk about different current events, and hearing this is great," Angelo Rice said.

Many also felt the guilty verdict provided a sense of justice and hope, but admit more work can still be done to make sure that this same standard of accountability is applied in future trials of officer-involved killings.

“Steps in the right direction are always important and this definitely shows that with the evidence and how they lay down the groundwork, we’re on the right track," Rice said.

After the verdict was read Tuesday afternoon, Governor Roy Cooper posted a statement on Twitter saying George Floyd's death shouldn't have happened in the first place, and urging the public to continue working for "positive change."

I appreciate the jury’s work for justice. George Floyd’s death shouldn’t have happened and we must continue to work to bring positive change to our state and country. - RC

Charlotte Mayor Vi Lyles shared a statement expressing her thoughts on the verdict. Lyles said she hopes the verdict brings some measure of closure to the family of Floyd, but she also said the trial should give us pause.

"Another Black man lost his life. Finally, justice was served," Vi Lyles wrote. "I hope everyone respects the result and understands this will not be the last time we have to address a situation like this. Change is needed and we should all be a part of that change."

Sheriff Garry McFadden with the Mecklenburg County Sheriff's Office issued a statement saying while the system worked to hold Chauvin accountable for his criminal actions, the decision will never return Floyd to his family, friends and community.

"At the Mecklenburg County Sheriff’s Office, we believe in the sanctity of life and treating everyone with dignity and respect. We have a moral responsibility to protect people in our custody from harm.

As Sheriff, I believe policing is a noble profession – yet I also know that not all individuals feel equally protected. The Mecklenburg County Sheriff’s Office remains committed to doing the hard work necessary to build the trust and confidence required to enhance safety for all who live and work in Mecklenburg County."

Charlotte-Mecklenburg Police Chief Johnny Jennings held a news conference after the verdict was read and said he had been watching and waiting for the verdict for over a year.

Jennings said law enforcement had been trying to build trust and incidents like this take them 10 steps back, but said on Tuesday, the justice system has spoken.

"We as a department and myself respect the decision by the jury, we respect the process that was laid out," Jennings said.

Addressing demonstrations, Jennings said officers should take a step back and look at how much they are contributing to agitation in large crowds.

CMPD Chief Johnny Jennings will hold a press conference at 5:45PM following Derek Chauvin’s guilty verdict. Earlier today, the chief said the department has been preparing for the verdict for weeks. He has said he hopes any celebratory demonstrations will remain peaceful @wcnc https://t.co/sKAqDZLCBF pic.twitter.com/fdf9vGNINI

"I think sometimes, we have to take a step back as an agency and realize how much are we contributing to the agitation," he said.

He said for the most part people just want to be heard and seen and their role is to help facilitate that.

Going forward, Jennings said he knows law enforcement has a lot of work to do in building trust with the community and said it doesn’t stop with this verdict.

"I want to make sure that we are getting that input not just from people who are vocal and coming to us, we also want to go out to the people to hear their voices," Jennings noted.

Jennings said he believes the case has already impacted how officers do their jobs, but he reminded everyone his officers are human, too.

"Police officers are human beings," Jennings said. "If people are expecting that we can change some policy or we can change some culture and all of a sudden there will never be a bad incident, then they're going to be waiting a long time. That's not going to happen."

Senator Tim Scott (R-SC) posted a statement on Twitter, saying there was "no question" the jury reached the right verdict.

"While this outcome should give us renewed confidence in the integrity of our justice system, we know there is more work to be done to ensure the bad apples do not define all officers -- the vast majority of whom put on the uniform each day with integrity and servant hearts," Scott's statement reads, in part.

Senator Jeff Jackson (D-NC) posted two tweets in response to the verdict, saying he was grateful for the verdict but acknowledged it took a video "seen by the whole world" to reach justice. Jackson also called for the passing of the George Floyd Justice in Policing Act.

The trial may have had a just outcome, but the conditions that led to it are proof of the continued injustice that falls along racial lines in our country.

And let's use this moment to remind everyone:

We need to pass the George Floyd Justice in Policing Act.

Speaking publicly before the Charlotte Hornets game, coach James Borrego said the day was important for the team.

"It's something we've talked about at tremendous depth, try to open it up to our players to try and talk and heal," Borrego said. "Today was an extremely important day for us. It was an appropriate verdict."

Mecklenburg County's Deputy Health Director took to Twitter to issue a short statement saying he was thankful for a step toward justice.

“Justice was served today, and while that will not bring back George Floyd or the countless thousands lost to state-sanctioned violence, it means the millions of Americans struggling, fighting to breathe free are closer to living in a just, beloved community. Thank you to the judge, the jurors, and the officers of the court for your work,” said Adams.

“However, in spite of today’s verdict, our work continues. The Senate must pass the George Floyd Justice in Policing Act to ensure that no other father, mother, son, daughter, aunt, uncle, sister, brother or loved one again dies at the hands of the police without accountability. Without passing the bill that bears his name, true justice for George Floyd and countless other victims still remains to be served.”

Monroe said first and foremost he believed the verdict was the correct one. Monroe went on to say the evidence presented by the prosecution was overwhelming.

"I believe the jury came together as one," Monroe said. "And we saw one single verdict represented in all of them."

Regarding how this trial has led to police reform for departments all across the country Monroe said he thinks we have to keep evolving.

Monroe went on to say police departments need to begin to assess people not only on their knowledge of law enforcement and their ability to run fast or jump high but on their ability to think with their minds and also their hearts.

"They can understand the struggles that other people go through and how to give other people a voice," Monroe said. "And we have to learn to let things go."