Former Carolina Panther Rae Carruth completed his paperwork for his release from prison and walked out a free man at 8:02 a.m. after serving nearly 19 years. 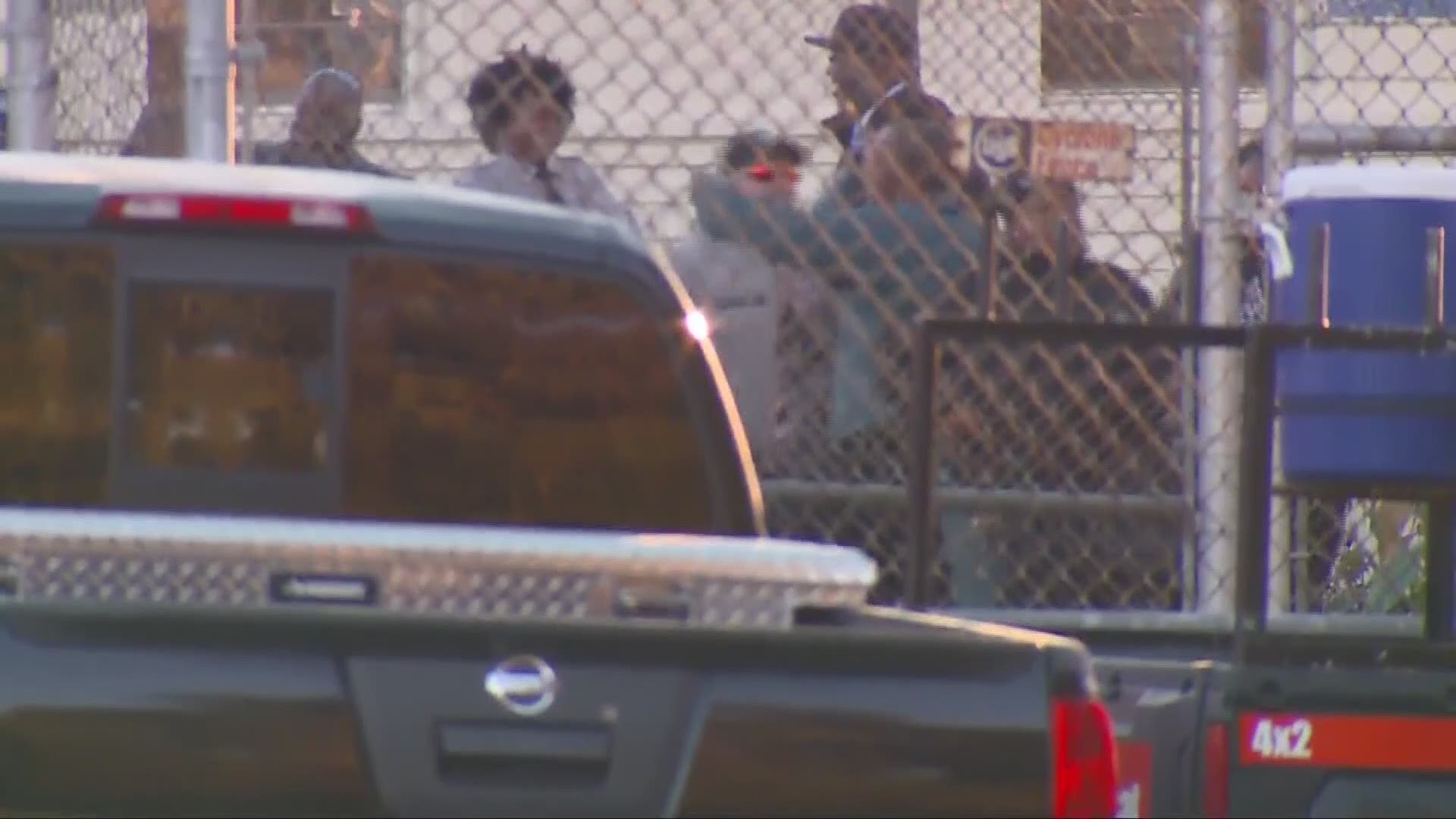 Former Carolina Panther Rae Carruth completed his paperwork for his release from prison and walked out a free man at 8:02 a.m. after serving nearly 19 years.

The former Carolina Panthers wide receiver spent the last 18 years behind bars for plotting to kill the mother of his unborn child. 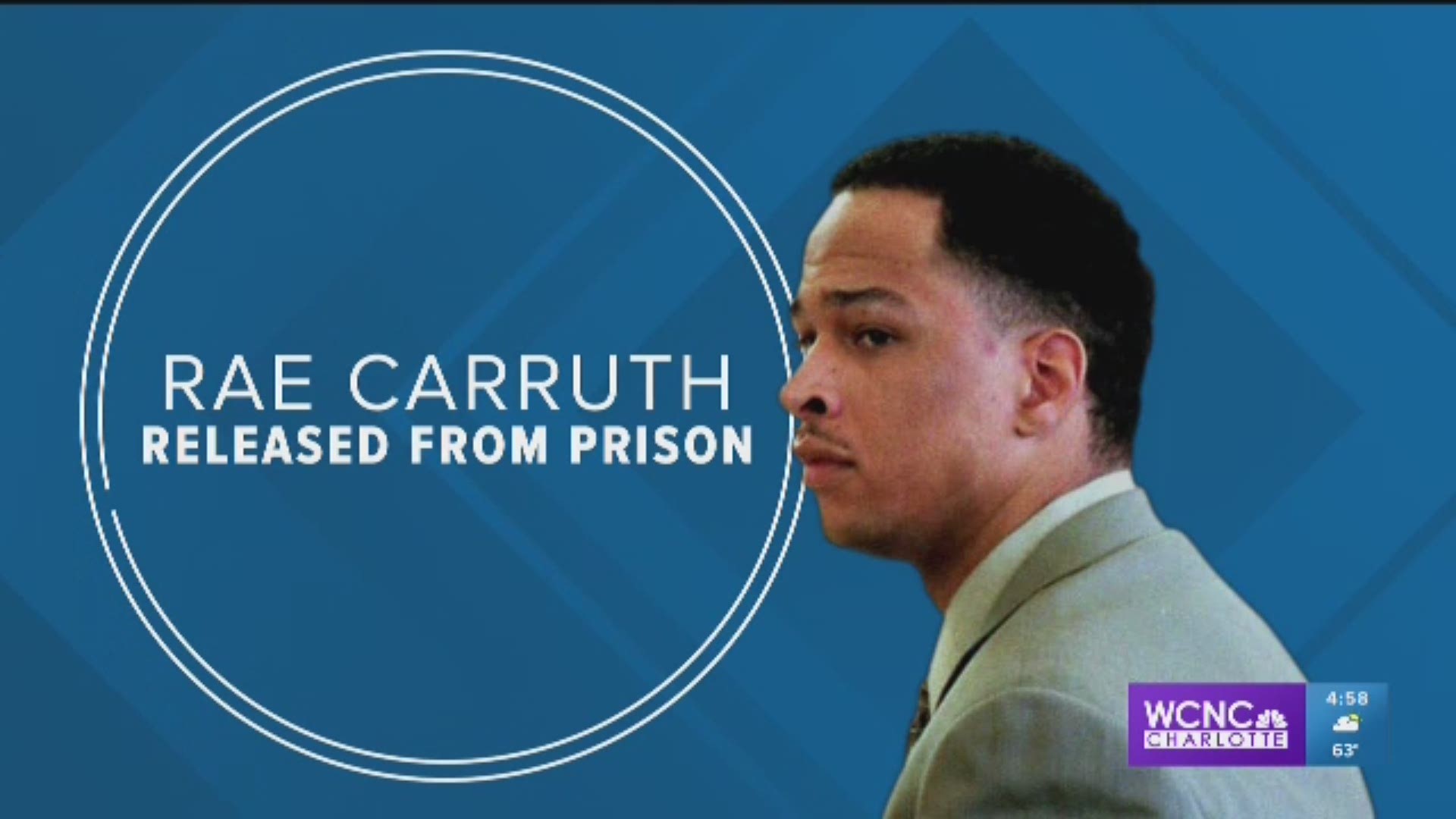 Rae Carruth wore jersey number 84 in the 1997 season, before switching to jersey number 89. Carruth was a first round draft pick of the Panthers in 1997 from the University of Colorado. He made nearly $40,000 a game catching passes for the Panthers.

After nearly 2 decades, Rae Carruth is now a free man

There were 15 television stations at the Sampson Correctional facility in Clinton, NC, a minimum security prison, waiting for Carruth's release. By law, 8 a.m. was the earliest he could be released and he walked out at 8:02 a.m.

Carruth got into a white Chevy Tahoe and left the Sampson Correctional facility. It is not known where Carruth was headed or what he plans to do. His attorney said Carruth does not plan to stay in North Carolina.

Carruth is licensed by the State of North Carolina as a barber where he made $1 a day in prison.

On the field, Carruth showed promise. He was drafted in the first round of the 1997 NFL Draft fresh off an All-American season at the University of Colorado.

"Knowing Rae personally, he's a good person, he has a good heart," a mutual friend said.

Born in California, he moved into a south Charlotte neighborhood once he joined the Carolina Panthers.

"They never were really outside much, very quiet," one of his neighbors said.

Carruth let his play on the football field do most of the talking for his first three seasons.

In his personal life, he gave off a good first impression.

"He seems to be reasonable, intelligent, level-headed, responsible," former prosecutor Paul Whitfield, who represented Carruth in an unrelated civil suit a year prior, said.

But eventually, the public's perception of him changed. Following a successful rookie season, Carruth started getting sidelined by injuries. But the speedy wide receiver couldn't outrun the events of November 16, 1999.

Cherica Adams called 911 after leaving Stonecrest Shopping Center. Carruth was driving ahead of her. She followed behind in her car.

The mother of his child was shot four times by a hitman near Rea Road.

"Rae Carruth," Adams responded. "He plays for the Panthers. Number 89."

Adams told 911 she was following Carruth when he hit the brakes.

"He slowed down and somebody pulled up and shot me," Adams said.

Adams was shot four times, lapsed into a coma and died the following month, but not before the emergency delivery of their son.

Carruth was arrested in western Tennessee after police found him hiding in the trunk of a friend's car.

Despite Carruth's attorney's best efforts to convince jurors Carruth planned on raising that boy together with Adams, one of his accomplices cast significant doubt.

Van Brett Watkins is serving 40 to 50 years in prison. Watkins fired the shots that killed Adams.

In a 2001 jailhouse interview, Watkins said, "I have to admit that I knew she was going to die with what caliber gun it was."

During the trial, Watkins made a memorable statement to Carruth's attorney. "I'm 286 pounds. I would rip you like a rag doll."

When asked about it, Watkins responded, "If you call that an outburst, God forbid you see my outburst."

Watkins is serving his sentence at Maury Correctional Institution. The first 10 years were difficult. Twenty-eight infractions landed him in solitary confinement over and over again. He spent seven years in solitary confinement, 23 hours a day alone in his cell. Most of the infractions were for fighting. But in a 2009 jailhouse interview, Watkins said he is not the man he used to be.

He suffers from osteoarthritis and degenerative hip disease. He reviews his life every day.

"A man's downfall is greed. The football player was making $38,000 a week. I was making probably $15 and I wanted the easy way," Watkins said.

Watkins is serving his time about an hour away from where Carruth served his time. When asked if he's had any contact with Carruth, Watkins responded, "For what? What's there to talk about. I got 40-50 years. I may die in prison."

Watkins was managing a Charlotte nightclub when the two met.

"He said one of the mangers told me that you was a hot shot in New York. He said I got a problem," Watskins said of his conversation with Carruth.

In the early morning of November 16, he and two other men followed Carruth and Adams from the movie theater at Stonecrest.

The trial aired on Court TV and during the 2010 interview, Watkins said he regularly received letters from about 30 people who watched the trial on TV. Half of the letters came from people he never met, but knew of him through the national spotlight on the trial.

Watkins sent several letters from prison to Saundra Adams, Cherica Adams' mom. Some of the letters even included $5 or $10 to try and help out with the care of Chancellor, who was diagnosed at birth with cerebral pasley.

"I'm not excusing the fact that he pulled that trigger and shot my daughter in cold blood the way he did," Saundra Adams told NBC Charlotte in an interview in 2010. "It's not saying that it's not justice for him to be serving time because it is. Because he took my daughter's life, because it was a horrific thing that he did but he didn't personally know my daughter. And I believe if he had been contracted to kill me he would have. It was about the money. It could have been anybody. It was no personal feelings toward Cherica."

Throughout his life Chancellor has surpassed doctors' predictions. He lives with his grandmother, Saundra Adams, who has raised him since birth.

When Chancellor was 10-years-old, it was a milestone moment when he took more than 100 steps on his own and had started to speak.

When Chancellor celebrated his 16th birthday, NBC Charlotte was invited to the celebration.

Against all odds, the son of the former Panthers player continues to live life to the fullest.

Like most Charlotteans, one of Chancellor's favorite things to at age 16 was watch football.

As he approaches his 19th birthday, it's important to remember Chancellor's made his own name in the community. Even Charlotte sports greats like Muggsy Bogues want a picture with him. The newborn baby boy who was almost killed is now an unstoppable man.

"He knows that God loves him," Saundra Adams said in an earlier interview. "His mommy angel is watching him and she loves him."

Saundra Adams knows she can't bring her daughter back, but her grandson has helped her to forgive Carruth and the others involved. With the biggest smile you'll ever see, both Lee and Adams are grateful for every year they share together.

Carruth has met his son twice, in his early prison years.

In a letter addressed to the mother of victim Cherica Adams and sent to a Charlotte television station, Carruth expressed remorse and a desire to establish a relationship with the son Adams delivered before dying in December 1999 of complications from gunshot wounds.

In the 15-page letter to Adams' mother, Carruth made his first public statement about the incident.

However, Carruth is scheduled to be released from Sampson Correctional Institution in Clinton, N.C., on Oct. 22. And in the letter, he said he wants custody of his son once he's free.

"I feel like he might not ever have his mother in his life but he could still have me and I could still make a difference and I don't think that's anyone's responsibility when I'm still here."

Meanwhile, Adams said she would fight to retain custody.

"I've forgiven Rae already, but to have any type of relationship with him, there does have to be some repentance," Adams told the newspaper. "And I think this opens the door. But I can say definitively he's not ever going to have custody of Chancellor ... He will never be raised by a stranger -- someone he doesn't know and who tried to kill him."

Carruth's mother: "It's going to happen"

Days before her son's release from prison, Carruth's mother, Theodry Carruth, spoke to NBC Charlotte's Ruby Durham about the life without her son and the grandson she doesn’t know much about.

Theodry said her son's release is a joy she can't put into words.

Rae Carruth's mom has been working through her son's conviction for almost two decades, standing by her son now as fiercely as she did the day she found out he was being charged.

"I know everybody has come across an unjust situation and say why us and right now we're saying why us. Why our son," Theodry Carruth said in a taped interview back when her son was first convicted of conspiracy to commit murder.

Carruth also questioned why she was denied joint custody of her grandson, Chancellor.

"Every time I went to court, I was beat up and I was tried as Rae Carruth not as Theodry," Carruth told NBC Charlotte.

Saundra Adams has had sole custody of Chancellor, who Theodry Carruth says is a spitting image of his father.

"Nobody takes into consideration there's not just one sentence, it's a second sentence. A family, children, his children," Carruth said.

Theodry Carruth and Saundra Adams have not been able to come to an agreement about visitation, but Theodry Carruth is hopeful that Rae Carruth's release will change that situation.

"He needs to hear that his father loves him and wants to be a part of his life," Theodry Carruth said. "He's only heard of one side of what happened, he's never heard from his father and I think that he's owed that as a young man."

1 / 16
Former Carolina Panthers wide receiver Rae Carruth spent the last 18 years behind bars for plotting to kill the mother of his unborn child.

Where are they now?

Carruth walked out of prison Monday morning and he has no plans to return to North Carolina, according to his attorney.

Carruth was the first active NFL player ever charged with first-degree murder. He was arrested Thanksgiving Day, 1999 and sent to Central Prison in Raleigh, where he slept on a top bunk with a Bible -- one of the few things he was able to take.

Known drug dealer Michael Kennedy was the man who claimed Carruth paid him to buy the gun used in the killing. He was driving the car that night.

Kennedy was the first defendant in Mecklenburg County history to take the stand without a plea deal.

Kennedy’s gamble to testify without a plea deal paid off. He got just 10 years in prison and was released in 2011. Court documents show he still lives in Mecklenburg County.

Van Brett Watkins, now 58, was the admitted triggerman in the plan.

WCNC talked to him from behind bars at the Craven Correctional Institution years ago. Reports say he has become a practicing Muslim.

"Remember this man here who people called crazy and everything else today the truth, showed remorse and deeply cares," Watkins said in the aforementioned interview.

Saundra Adams, Cherica Adams' mother, has been raising her daughter’s son since his birth.

"A lot of times people will say why me, why me, why did this happen," Saundra Adams' said. "I feel so blessed to have Lee...Chancellor in my life.”