Timothy Rochell Caraway was shot by officers on February 1, 2020. Never-before-seen body camera video of the shooting was released Monday. 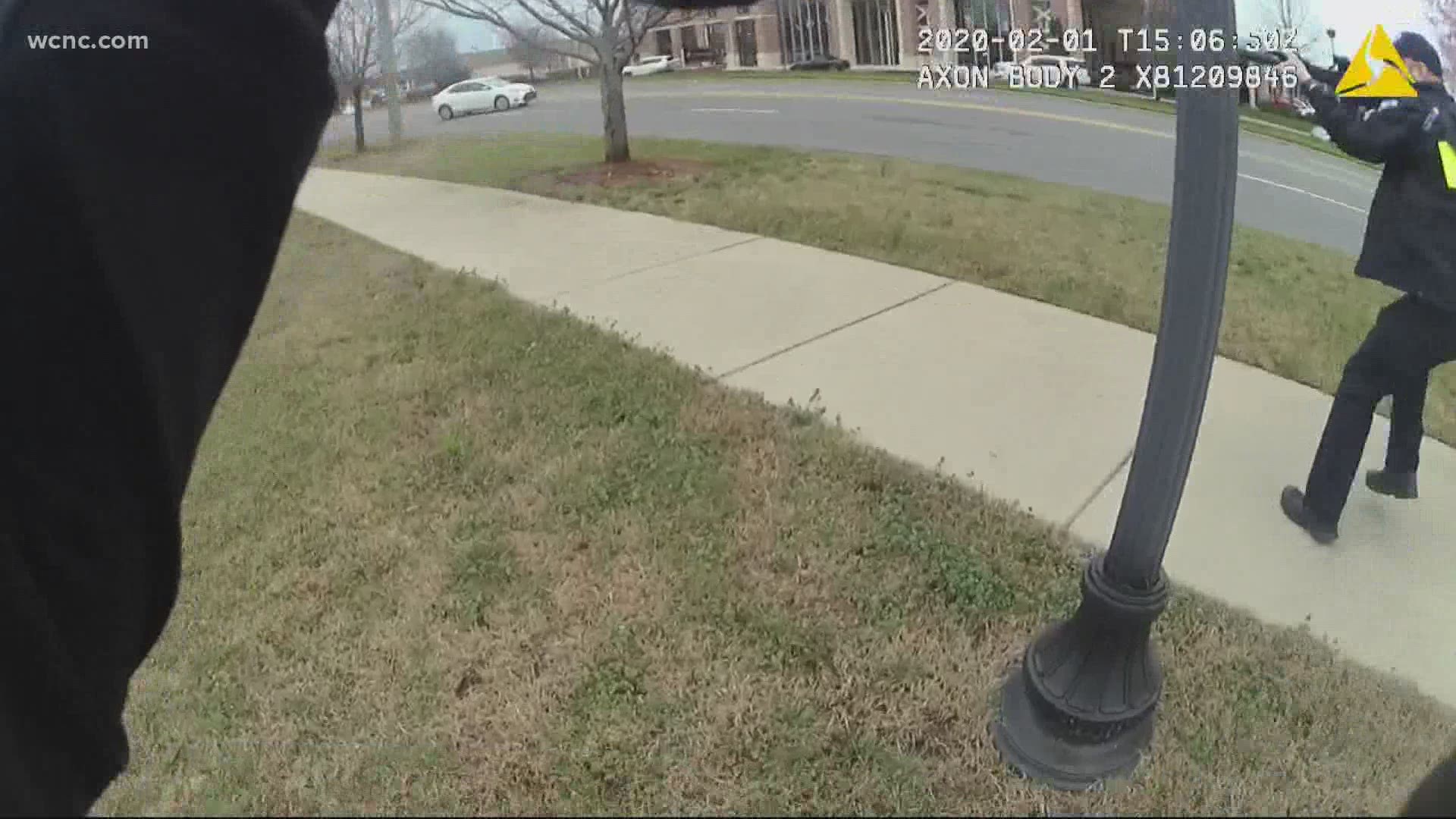 In the video, released publicly for the first time Monday, you can see officers shooting Timothy Rochell Caraway. Caraway survived the shooting and was treated for serious injuries inflicted by the gunshots.

Around 10 a.m. on February 1, 2020, officers responded to North Polk Street, between Interstate 485 and Highway 51, after receiving a 911 call about a man, later identified as Caraway, waving a gun.

"During the officers’ approach, Caraway turned towards the officers and displayed actions on what the officers believed to be an imminent threat to their safety and the safety of others," the Pineville Police Department said in a released statement later that same day. Two Pineville police officers fired their weapons hitting Caraway, according to the department.

On Monday, the police department released additional details, including the names of those officers: Adam Roberts and Jamon Griffin.

As officers approached Caraway from behind, they saw him holding a cell phone, Pineville Police Chief Michael Hudgins said Monday. As can be heard on the body camera footage, officers gave verbal commands for Caraway to raise his hands. While it is hard to see in the video footage, Hudgins confirmed Monday Caraway initially raised his hands.

Hudgins said it was "plausible" the officers initially mistook the phone for a gun. He said when Caraway reached into his pocket, for what was later determined to be an actual handgun, officers fired their weapons.

Caraway was seriously injured by the gunfire.

In portions of the video released by the Pineville Police Department Monday, officers can be seen rendering aid to a bloody Caraway until Medic paramedics arrived a few minutes later. Caraway's handgun can be seen on the ground near where he falls.

On Monday, the Pineville Police Department released one audio recording of a 911 call and three videos from body-worn cameras.

Below you will find about one minute of video recorded by Robert's body camera. In an effort to balance transparency in what is otherwise graphic content, WCNC Charlotte has decided to not show additional video beyond this portion because of the graphic nature.

Viewer discretion is advised for the following video, which does show the shooting. In this video, you will hear Caraway's initial cries and see some blood. You will also hear cursing. 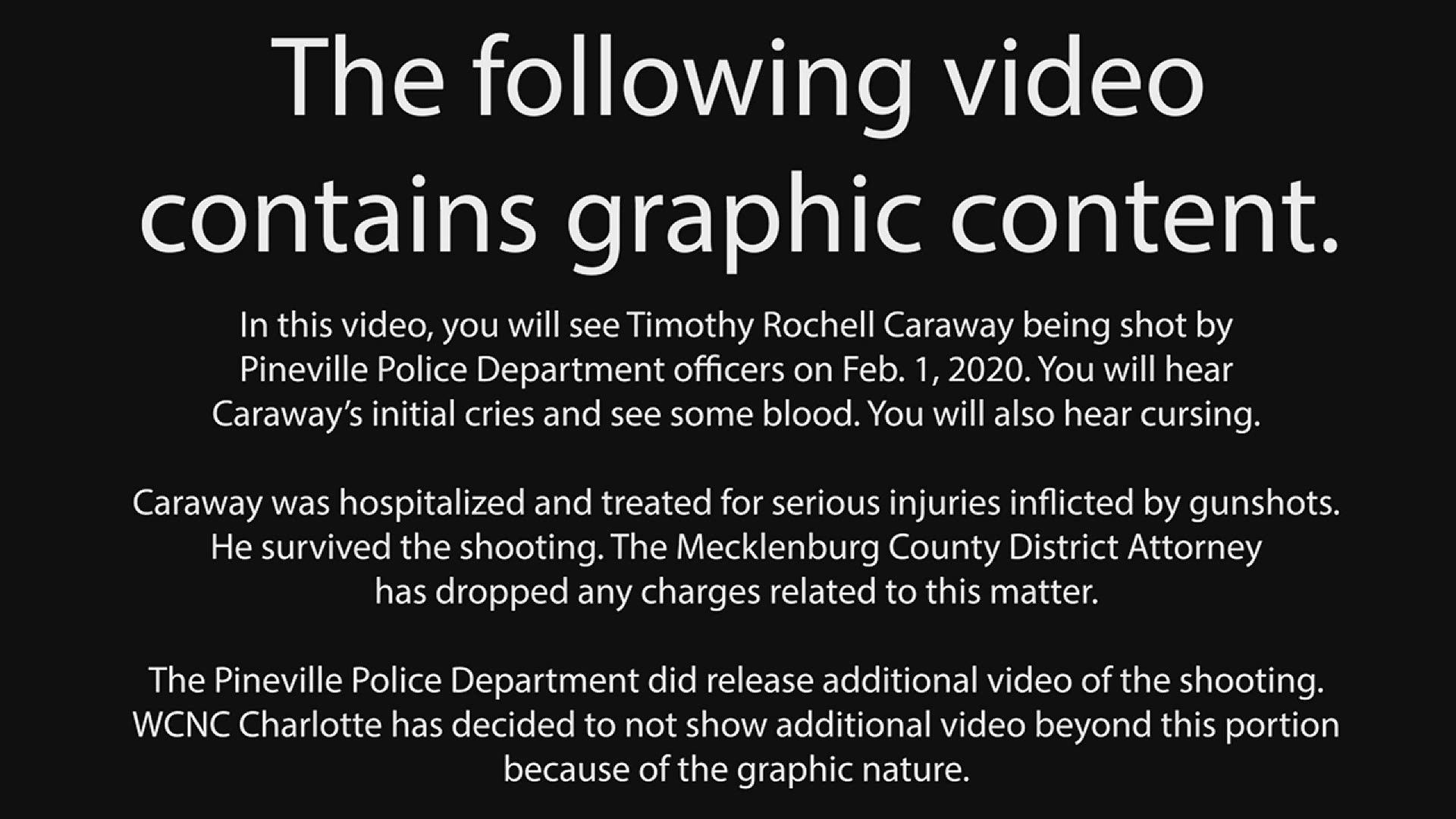 Cell phone video recorded by a witness and shared with WCNC Charlotte in February of 2020, does show Caraway being lifted into an awaiting ambulance before being transported to Atrium Health's Carolina Medical Center.

FROM FEB. 2020: Police identify man shot by officers in Pineville 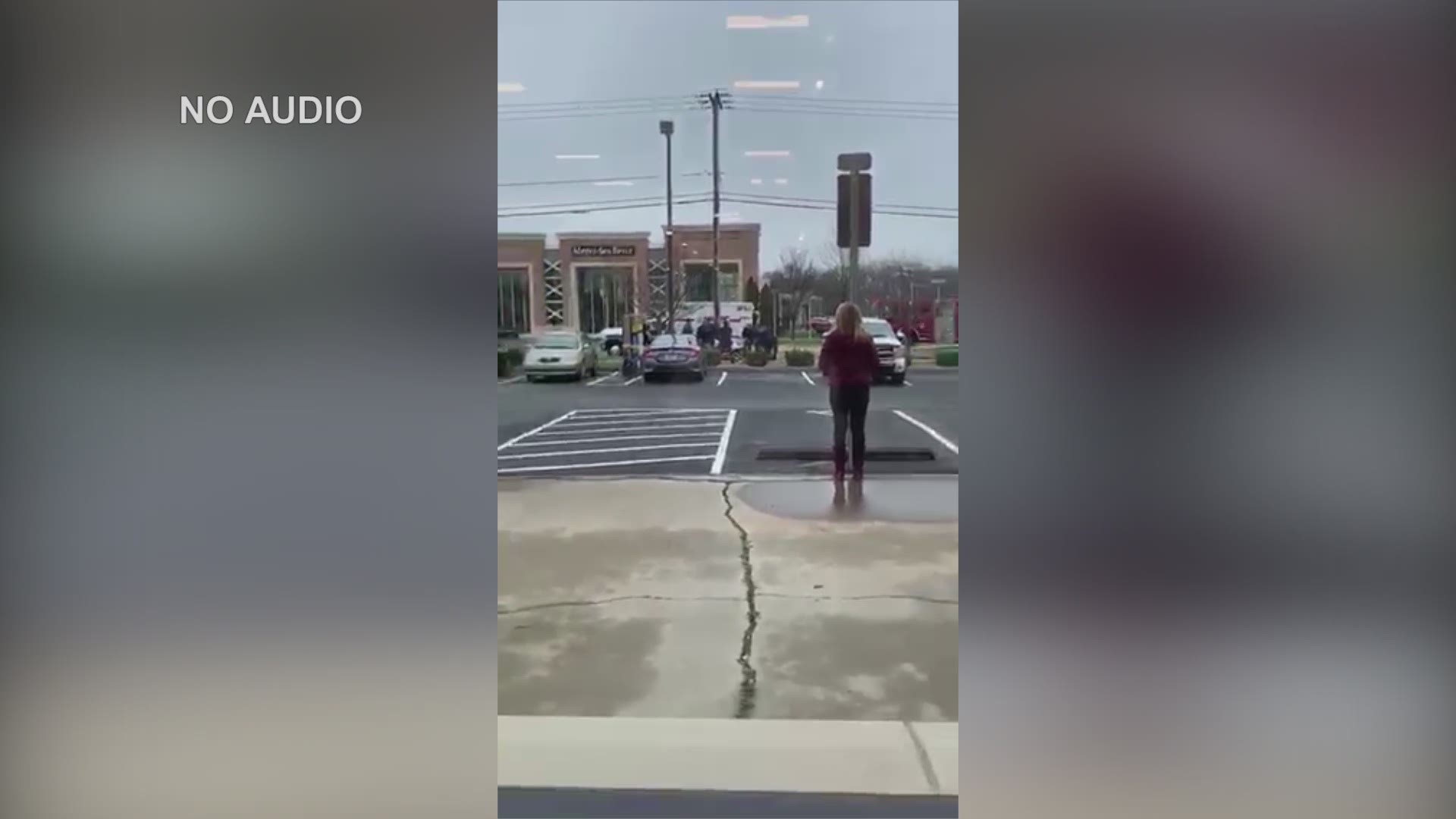 Hudgins said the actions of his officers were reviewed by the North Carolina State Bureau of Investigations and the Mecklenburg County District Attorney's Office. The district attorney decided to not charge the officers criminally in the shooting, according to Hudgins.

WCNC Charlotte is reaching out to both the SBI and the DA's office to confirm their findings.

Hudgins said an internal investigation into the actions of his officers is still open. The officers have all returned to their regular duties.

Hudgins also announced Monday charges against Caraway related to this shooting were dropped. As was reported at the time, Caraway had been charged with seven charges related to the matter. The Pineville Police Department confirmed to WCNC Charlotte Monday the only charge Caraway is still facing is the possession of the stolen firearm. Other charges related to his alleged actions along the street, and for his interaction with law enforcement, have been dropped, according to the police department.

As was mentioned by the Pineville Police Department Monday during their meeting with reporters, Caraway is also still facing other charges related to a domestic incident that occurred around this same time in 2020. It was not immediately clear if the domestic incident had any involvement or influence on his interaction with police on Feb 1.