NBC Charlotte learned a fight between two people at the Epicentre led to the shooting, which critically injured Dr. John Holaday. 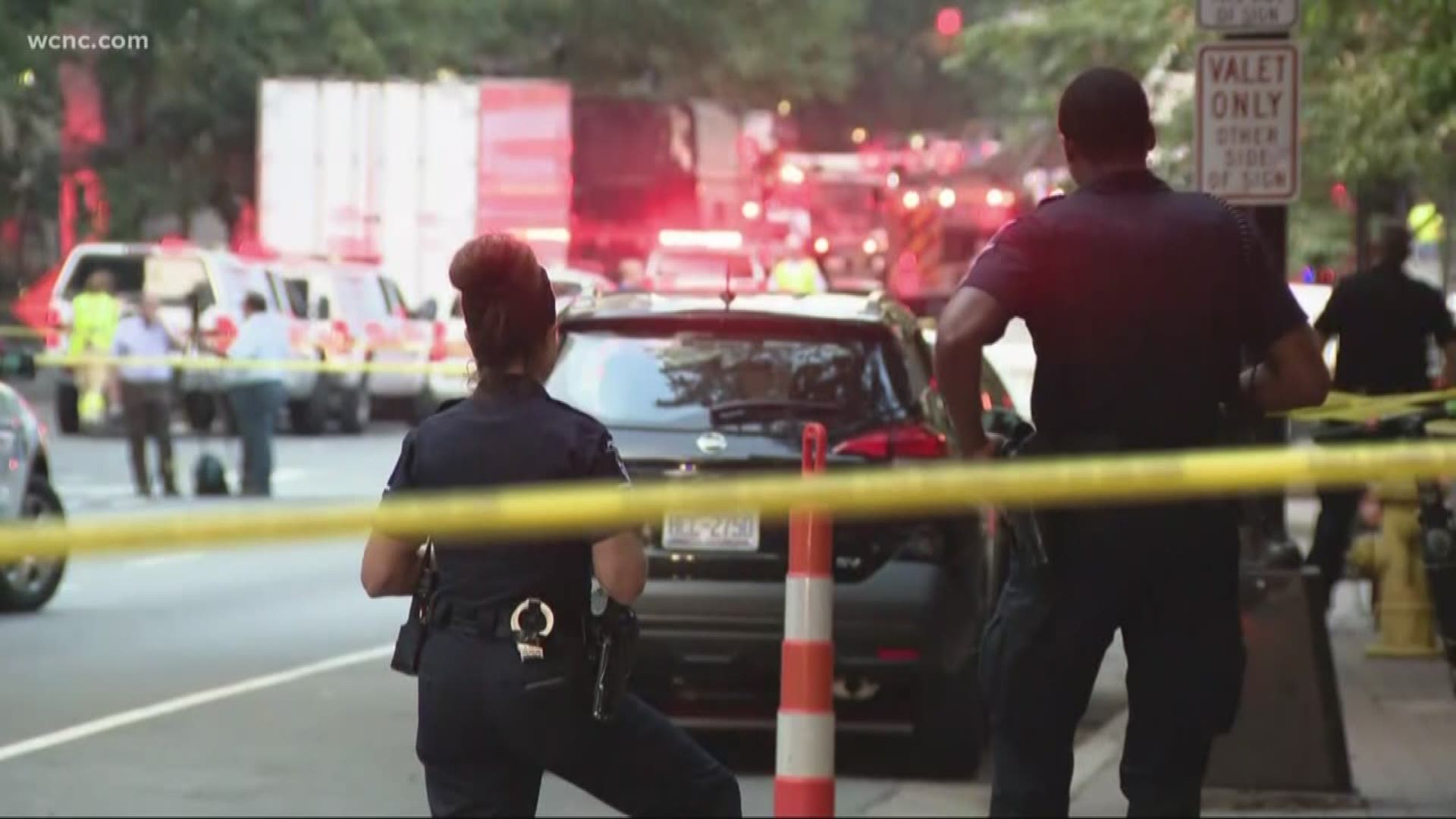 CHARLOTTE, N.C. — Editor's note: Dispose RX has confirmed John Holaday, Ph.D has passed away on Friday, Oct. 4, as a result of injuries he suffered a shooting in uptown Charlotte.

"Words cannot describe the immense sadness and grief we feel in losing our leader, mentor, colleague and friend," said DisposeRx President William Simpson. "While we will continue to struggle with the senseless and tragic way in which John died, we will honor him every day in the way that we operate and represent DisposeRx. We are more committed than ever to fulfilling his dreams."

"We would like to express our sincere appreciation to the emergency responders and staff of Atrium Health Carolinas Medical Center for the amazing care and compassion that they showed to John and his family during the most difficult of days," said Denis Connaghan, DisposeRx Chief Financial Officer.

An out-of-town doctor and the CEO of a drug disposal company was seriously injured in a shooting that happened in uptown Charlotte Monday afternoon.

According to the Charlotte-Mecklenburg Police Department, 16-year-old Raheem Shacklette was charged with attempted murder in the shooting of 74-year-old John Waldron Holaday.

NBC Charlotte learned a fight between some people at the Epicentre led to the shooting. Holaday was not involved in the argument.

"When the officers arrived, they located Holaday in the street with an apparent gunshot wound," the police department said in a released statement.

Holaday was taken to the hospital with life-threatening injuries, according to Medic.

"MEDIC and Charlotte Fire Department arrived almost immediately due to their close proximity while attending to an unrelated fire call," CMPD said.

According to his company, DisposeRx, Chairman, Founder and CEO John Holaday, Ph.D., was walking to a business meeting in uptown before he was randomly shot.

His company has released the following statement:

“The DisposeRx family is in shock that a random unrelated altercation could result in profound injuries to our chief executive officer,” said William Simpson, DisposeRx President. “But we know John. He is strong and healthy, and he is a fighter. We will stand by John, his wife and sons as he recovers, and we remain committed to fulfilling his vision and mission at DisposeRx. We’d like to thank the Charlotte emergency responders for their prompt onsite care provided to John.”

“Within about ten minutes or so we had the 16-year-old suspect in custody,” CMPD Captain Julie Barry said.

Police say 16-year-old Raheem Shacklette pulled the trigger after a fight had ended with several people.

“The argument was done and the suspect decides to fire a gun,” said Captain Barry.

Witnesses who work nearby at the Epicentre described what they saw.

“People said there was a fight happening, witness Jerrell Cuevas said.  “As soon as I turned the corner that’s when the gun went off and everyone just took off.”

Police say the person shot was an innocent bystander. Those visiting uptown say knowing a crime like this could happen to anyone and leaves them feeling uneasy.

“That’s the scariest part,” Stephanie Finn said. “You know the person who got shot had nothing to do with anything.”

The Charlotte-Mecklenburg Police Department held a news conference on Tuesday to discuss how rare this type of shooting is.

Despite the innocent bystander being shot, CMPD says uptown is a safe area.

“Charlotte is safe, it is a safe city,” Captain Barry said. “It could have happened anywhere, it’s about the 16-year-old who made a decision, a poor decision, that cost somebody else to be critically injured.” 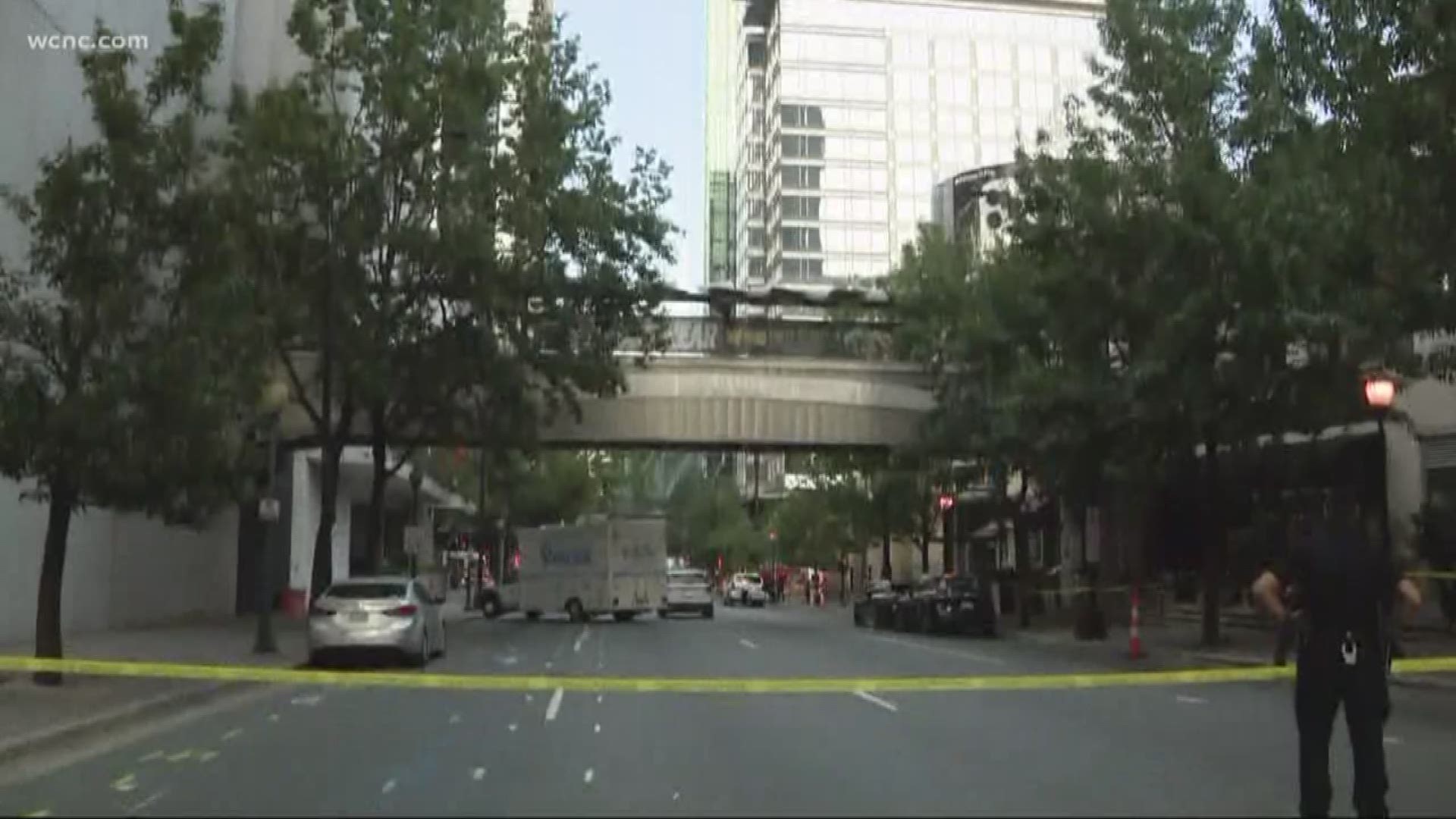 NBC Charlotte looked at CMPD crime-mapping in uptown and found 82 crimes within a mile of the Epicentre within the past month. That includes 18 assaults; two of them involving guns. There was also an armed robbery in that time period.

“You’re going to have a slight increase in crime in any major city when you have an increase in population,” Captain Barry said.

Neither the victim or the suspect live in the Charlotte area.

Dr. Holaday was visiting from Maryland and police say it’s not clear why Raheem Shacklette was in town from Georgia. He had his first court appearance on Tuesday, where a judge appointed him an attorney.

Firefighters were also battling a fire near Rooster's Wood-Fired Kitchen at One Bank of America plaza that same afternoon. That fire started around 2:45 p.m. and took 65 firefighters to get the flames under control.