Tyler Terry and Adrienne Simpson have been connected to two deadly shootings and an alleged drug deal in Missouri. Terry is also wanted for a murder in York County. 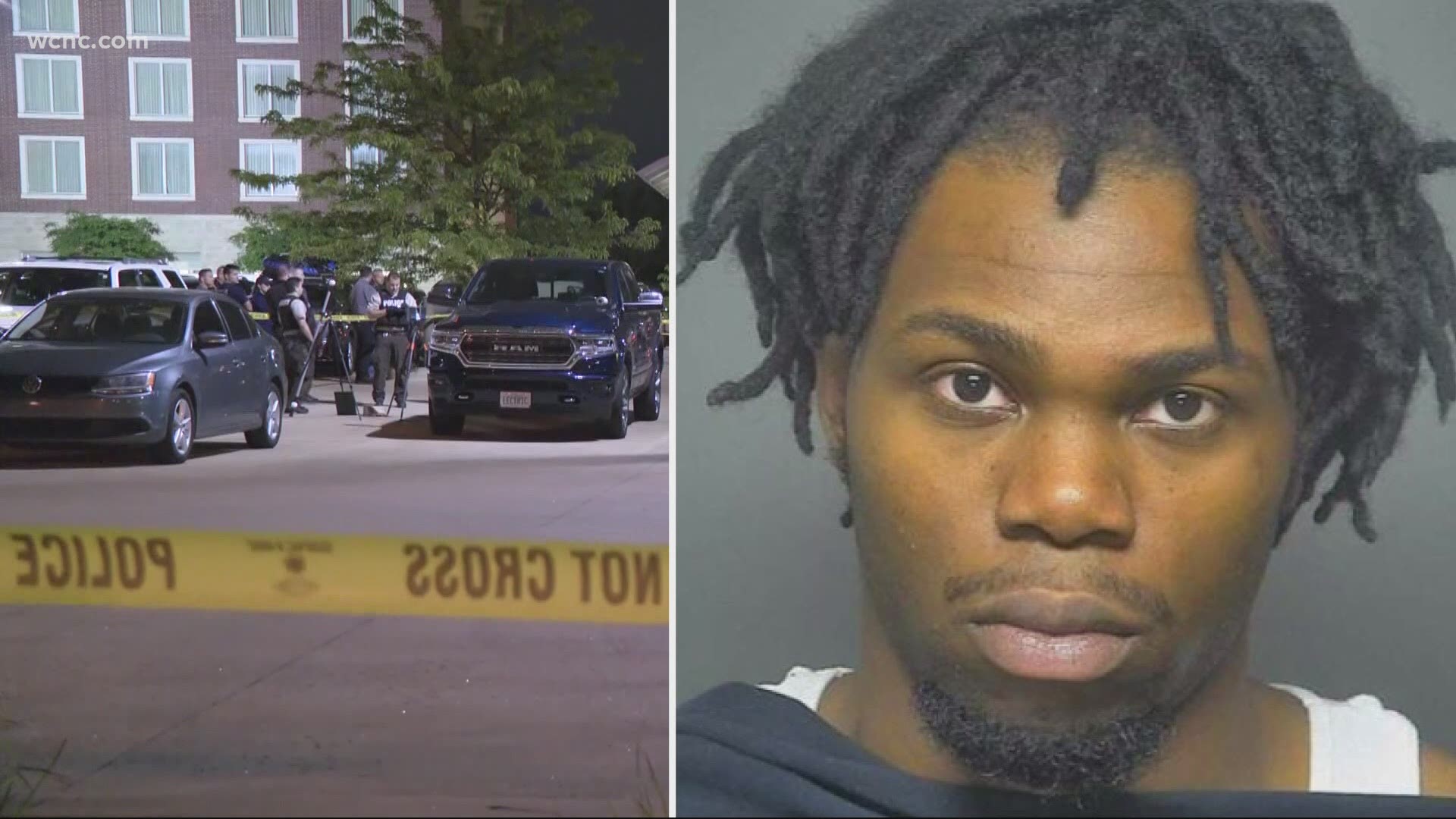 ROCK HILL, S.C. — The Federal Bureau of Investigation (FBI) has joined the manhunt for Tyler Terry, the at-large suspect accused of murder and attempted murder in Missouri and South Carolina, authorities announced Friday.

FBI agents from Charlotte have been sent to Chester County, South Carolina, to assist authorities as they look for Terry. He has been on the run since late Monday after a police chase ended with a crash on Highway 9 near Richburg. Terry is accused of firing multiple shots at Chester County deputies during the chase, striking multiple vehicles.

The driver of the car, identified as Adrienne Simpson, was arrested at the scene of the crash and faces multiple charges. There is a $12,000 cash reward for any tip that leads to the capture of Terry.

Chester County Sheriff's office also announced Friday that Terry and Simpson have been charged in the murder of 33-year-old Eugene Simpson, the husband of Adrienne. Arrest warrants say Simpson admitted she and Terry shot Eugene on May 2, then dumped his body on Stroud Road in Great Falls.

Wednesday evening, Chester County Sheriff’s Office confirmed in a tweet that a body had been found. Investigators said Eugene Simpson was reported missing by his mother on May 2-- the same day he was killed.

Terry and Simpson are also wanted for their alleged role in two shootings in St. Louis, Missouri. According to WCNC Charlotte's sister station in St. Louis, KSDK, the pair were identified as suspects in the killings of Dr. Sergei Zacharev and Barbara Goodkin on the night of May 15. Some of Zacharev's personal belongings had been taken from him, and he had been shot multiple times, according to sources familiar with the investigation.

A year before going on the alleged crime spree, which investigators liken to Bonnie and Clyde, Tyler Terry and Adrienne Simpson were linked to other criminal cases, in North Carolina and South Carolina, and court records show, in those cases, Simpson was his victim.

An arrest warrant shows Terry was arrested for domestic violence in Chester in May 2020.

Court records accuse him of assaulting Simpson at a hotel, causing disfigurement, hearing loss, a swollen eye and leaving her in fear for her life.

The warrant said, at that time, the two had been in a romantic relationship for approximately two years.

The court records also allude to Terry's previous convictions earlier that year in North Carolina, which included carrying a concealed weapon and assault on a female.

According to the warrant, Simpson is listed as the victim on his North Carolina domestic-related charges.

According to the North Carolina Department of Public Safety, Terry was sentenced to 18 months of probation, but a spokesperson said he absconded in September 2020.

He was last seen wearing a blue button up Burns Auto shirt with the name David on it. He was also wearing black pants and brown or camouflage Crocs on.

We have attached a video for reference. pic.twitter.com/D9kMYp81t8

On Thursday, Chester County authorities tweeted there was a confirmed sighting of Terry between the area of Fisher Creek and ATI on Highway 9.

"Didn’t really think he was still here, to be honest, after two days, you would think, you know, probably would have gave up or something," Casey Huffman, sales and marketing manager for Carolina Earth Movers, said. "But man, I guess he was still camping out still.”

Huffman said Terry could be seen in the video, which was taken around 9:20 p.m. Wednesday, in one truck on the property, but he couldn't get it to start.

Terry took some drinks, some paper towels, a pair of crocs, a work shirt, and a gun, Huffman added.

The video shows Terry getting into a small utility vehicle and taking off.

Huffman said Terry drove about half a mile up Highway 9 toward I-77 before ditching the vehicle, which only goes 15 miles per hour.

"He ain't getting nowhere in that man," Huffman said. "I guess he realized that after he got up the road a little bit. Yeah, not the smartest choice on him."

According to authorities, Terry was last seen wearing a blue button-up Burns Auto shirt with the name David on it. He was also wearing black pants and brown or camouflage Crocs.

Law enforcement experts say in the search for an armed suspect like Terry it's important to set up a perimeter search, use helicopters and infrared technology, along with K-9s.

“A K9 that is using air scent that scent is always there," law enforcement expert Dr. Ron Taylor said. "Our body is shedding over 500 thousand skin cells every hour.”

There has been a confirmed sighting of Terry between the area of Fishing Creek on Hwy 9 and the ATI (formerly referring to Allvac plant).

Neighbors who live in the search area say they have felt uneasy the last few days, but have witnessed firsthand the police efforts.

“It’s been shaky and nervous, can’t go outside, can’t do what you want to do, neighbor Eddie White said. "The police came around and looked in the cars and looked under the house.”

Simpson was reported missing by his mom on 5/2. The spokesman for the Sheriff’s Office says “We are not establishing a connection to the search for Terry, but we are actively investigating that possibility.” @wcnc https://t.co/kn9PiCzLi6

Investigators said one of the suspects stole a license plate from a vehicle to use on a Mitsubishi Mirage that was traced to a drug deal in St. Louis. That car was later spotted by police in Chester County. It was the attempt to stop that vehicle that led to the 30-mile-long pursuit and subsequent crash on Highway 9 in Richburg.

"He is to be considered armed and dangerous," Sheriff Max Dorsey said Monday. "He fired shots, multiple shots at my deputies."

Terry is also accused of the May 2 death of Thomas Hardin in York. Hardin, who identified as a woman, reportedly was an acquaintance of Terry. York Police said the two "knew each other from the past."

#BREAKING Just spoke to an investigator with York PD on the murder case of Thomas Hardin. Tyler Terry is accused ofkilling Hardin on May 2nd. Hardin who identified as a woman is pictured below. I’m told Hardin & Terry were “acquaintances” & “knew each other from the past.” @wcnc pic.twitter.com/KiwhKezZUq

Police said it's unclear why Terry and Simpson were in St. Louis County as they have no known connections to the area.

"We have absolutely no idea, and we may not know," Brentwood Police Chief Joseph Spiess Jr. said. "It could be random how they ended up here in Brentwood and University City. We don’t know. We may know at the end of the investigation, but we’re not there yet."

There are numerous warrants for Terry's arrest. On Tuesday, the Chester City Police Department obtained five warrants for attempted murder stemming from Terry's accused shooting at deputies Monday. Additionally, a warrant was issued for the May 2 murder of Thomas Hardin.

The Sixth Circuit Solicitor’s Office announced Thursday that it will seek warrants on anyone alleged to have helped Terry in any way. Anyone convicted of helping him evade law enforcement could face up to 15 years in prison upon conviction.

“I’m praying that this manhunt comes to a safe and prompt end. I am hopeful that folks in this area are taking this seriously," Solicitor Newman said. "We need to remain vigilant and report to law enforcement any suspicious activity. I can assure you Sheriff Dorsey and his team along with several other state and federal agencies are doing everything in their power to locate and arrest Mr. Terry.”

"We're utilizing experts that are the best in the country at finding people in this terrain," Dorsey said.

"This isn't the movies," Dorsey said. "This is real life and this is a real situation, but remember even in the movies he wasn't caught right away, it takes time."

The manhunt has many people in the area on edge.

"It's scary cause I have a two-year-old who's always in Chester County with his dad and his family so it's hard to comprehend everything," Michaela Dean said. "It's stressful for everyone, it's more of try to keep calm and just do what we have to do."

"It is a little scary the fact that he's traveled this far is really shocking to me," Neal Stidham said.

While the search is still underway, authorities are asking neighbors to lock your doors to your home and your vehicles, but most importantly secure any firearms.

"I need everybody in this community to know where their firearms are and make sure they are in their possession under lock and key at home in a safe or somewhere but they can not be in a vehicle," Dorsey said.

UPDATE: The subject we are looking for is possibly Tyler Terry the subject Chester County Sheriff’s Office has been searching for. He’s a black male 5’7” black clothes no shoes. In the area of Lesslie Hwy & Firetower Rd. Call 9-1-1 right away. pic.twitter.com/15Z1f5lAfF