The CMS board voted Tuesday to pause its rule requiring students to maintain a 2.0 GPA to be eligible for extracurriculars, including sports. 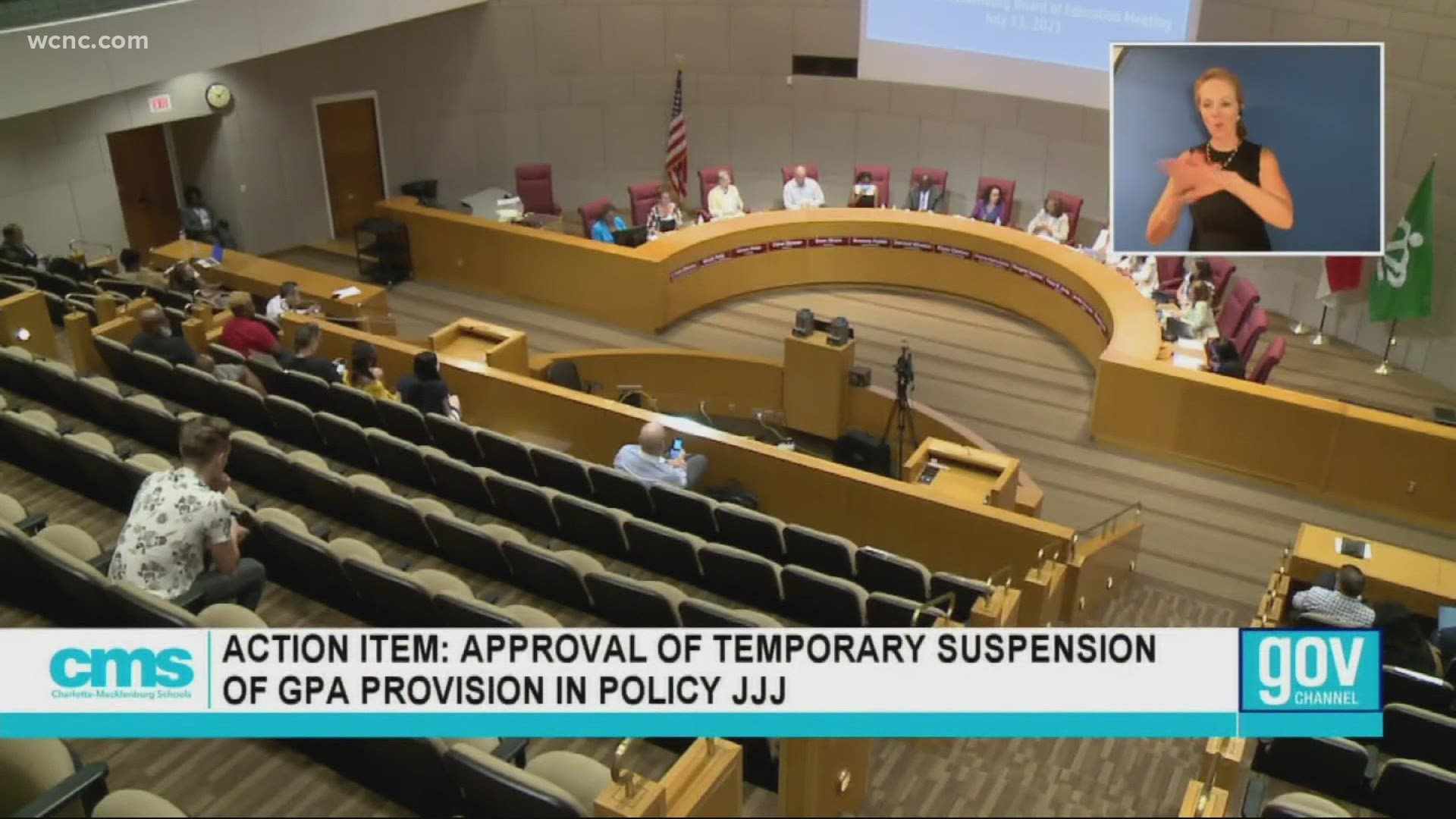 CHARLOTTE, N.C. — Charlotte-Mecklenburg Schools students will not have to meet a minimum GPA requirement to participate in extracurricular activities, including sports, this fall.

The CMS Board of Education approved the measure during Tuesday night's meeting. The ruling will pause the district's 2.0 GPA requirement for eligibility in extracurricular activities and clubs.

“The importance of that music program, the importance of ROTC, robotics, odyssey of the mind, soccer, track -- whatever the extracurricular that speaks to the heart of the child -- the heart of a student is something we need to honor and respect,” said board member Rhonda Cheek, who introduced the motion.

District leaders say the pandemic had a big effect on students' learning and they want all students to be eligible for extracurricular activities this upcoming semester.

“We’ve made it really tough for those kids to be academically successful,” said Cheek, as she asked all board members to consider the seriousness of her motion. Cheek also said it was important that the board take a vote sooner rather than later noting that try-outs for sports teams and sign-ups for clubs are quickly approaching.

“I strongly believe that student outcomes and academic excellence is what we have to strive for, but I also believe we have to look at the heart of every student and do everything we can to help their heart and get back to some sense of normalcy and this will be a big step,” she said Tuesday.

Olympic High School head football coach Brandon Johnson said he sees it not as a free pass, but as a second chance.

“If there was ever an opportunity for a second chance, I think now is the time that everybody deserves to kind of start fresh,” Johnson said.

“It’s just an opportunity for them to be back around responsible coaches, coaches that are pouring into them, trying to show them the right way and I think that punishing a kid, a high school kid …14, 15, 16 years old during a pandemic, they should get a second chance at this thing,” he said, adding that each student’s circumstance during the pandemic was different.

“Parents are working, kids are babysitting, kids are having to pick up extra part-time jobs, kids are at home unsupervised,” he said, saying that even when students were allowed back on campus last spring, many of his students, who he says could have used the extra help, we’re held back by their families.

“A lot of those kids wanted to come back, but their parents wouldn’t allow it because, hey, you might have people in your family at risk,” said Johnson, saying the pandemic was a serious concern for many.

Football players for Olympic are back on campus for pre-season activities and today, when Johnson told the team about the BOE’s decision, he said he could see a huge relief come off some of his player’s shoulders.

“They just feel a sense of relief and feel like, ‘Hey coach, I’m going to have really good grades this year, you know, I’m not going to put myself in that position anymore coach, I got it,’ You know I think they’re taking their second chance very seriously,” said Johnson.

But although the motion was passed by the BOE Tuesday, 2 board members – Margaret Marshall and Sean Strain voted against it.

The CMS Board of Education says they are also considering waiving the minimum GPA requirement for the spring semester as well, but has not yet made a decision.

Three other districts in the Charlotte region said they've also removed or don't have GPA requirements for athletes.

RELATED: 'I'm not co-parenting with the government' | Dozens sound off on critical race theory in schools at CMS board meeting