A homework assignment asked students how many slaves equated to one white person. One mom posted on Facebook, wondering why. 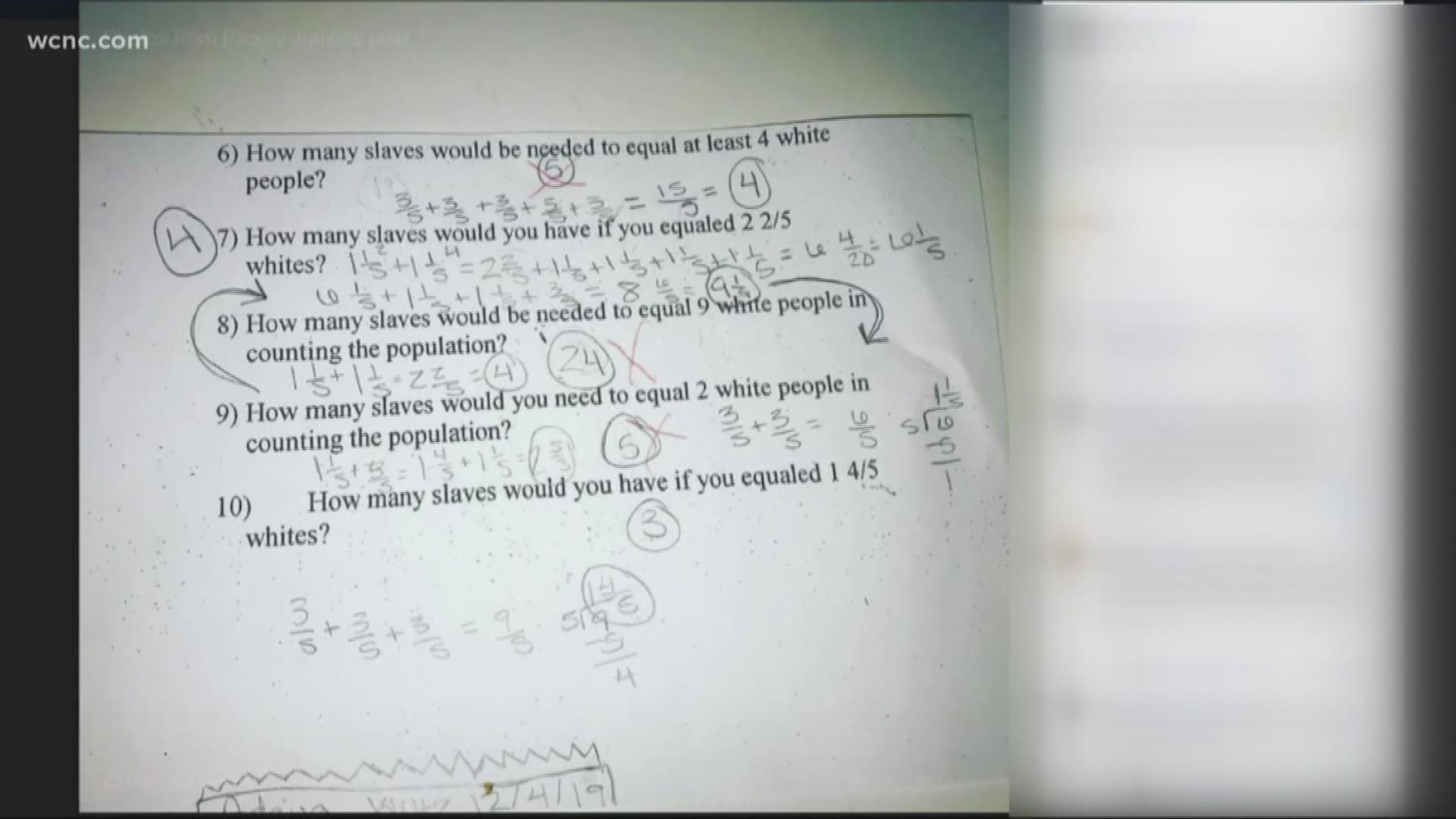 KANNAPOLIS, N.C. — A North Carolina mother is raising questions about a homework assignment asking students to compare the value between slaves and white people.

The mother posted a picture of the Kannapolis Middle School assignment to Facebook asking if anyone could explain the purpose of questions such as: "How many slaves would be needed to equal at least 4 white people?"

According to the mother's Facebook post, her child was instructed by an unnamed history teacher that "every black person is 3/5 or some percentage of a white person." Since then, multiple other people have shared photos of the assignment on social media.

Parents say their children came home with the assignment from their history class -- allegedly a lesson on the three-fifths compromise.

The school said they are taking steps to make sure it does not happen again.

"All of us at KMS and in Kannapolis City Schools sincerely apologize to you and all who were rightfully offended, and we're making sure the assignment does not count toward any student's grade."

Kannapolis City Schools said in a statement the school's principal and district superintendent had contacted the mother directly.

The teacher behind the assignment has been disciplined, according to the school district. It was not immediately known if the teacher was facing suspension.

"It sounds to me like it was a blatant racist homework assignment," Kannapolis resident Nathan Davis told NBC Charlotte.

"We expect and promote racial equity in our schools, and this assignment did not meet that standard or expectation at all," Kannapolis Middle School said in a response to the mother's Facebook post. "We are very sorry for that and are working to help make sure it won’t happen again."

Whether the assignment provided additional historical context regarding the Three-Fifths Compromise, a compromise first proposed during the Continental Congress in 1873 counting every three out of five slaves for the purpose of population, was not known.

"These are kids who are playing together and working together and going to school together," Davis said. "That could cause them to start looking differently at their classmates."

What started as a lesson plan for students turned into a lesson for a teacher and the school district.

"I hope they learned something from it and they make efforts for it not to let it happen again," Davis said.