'I do not feel safe at Myers Park' | Dozens of students demand accountability, claiming school leaders covered up sexual assaults 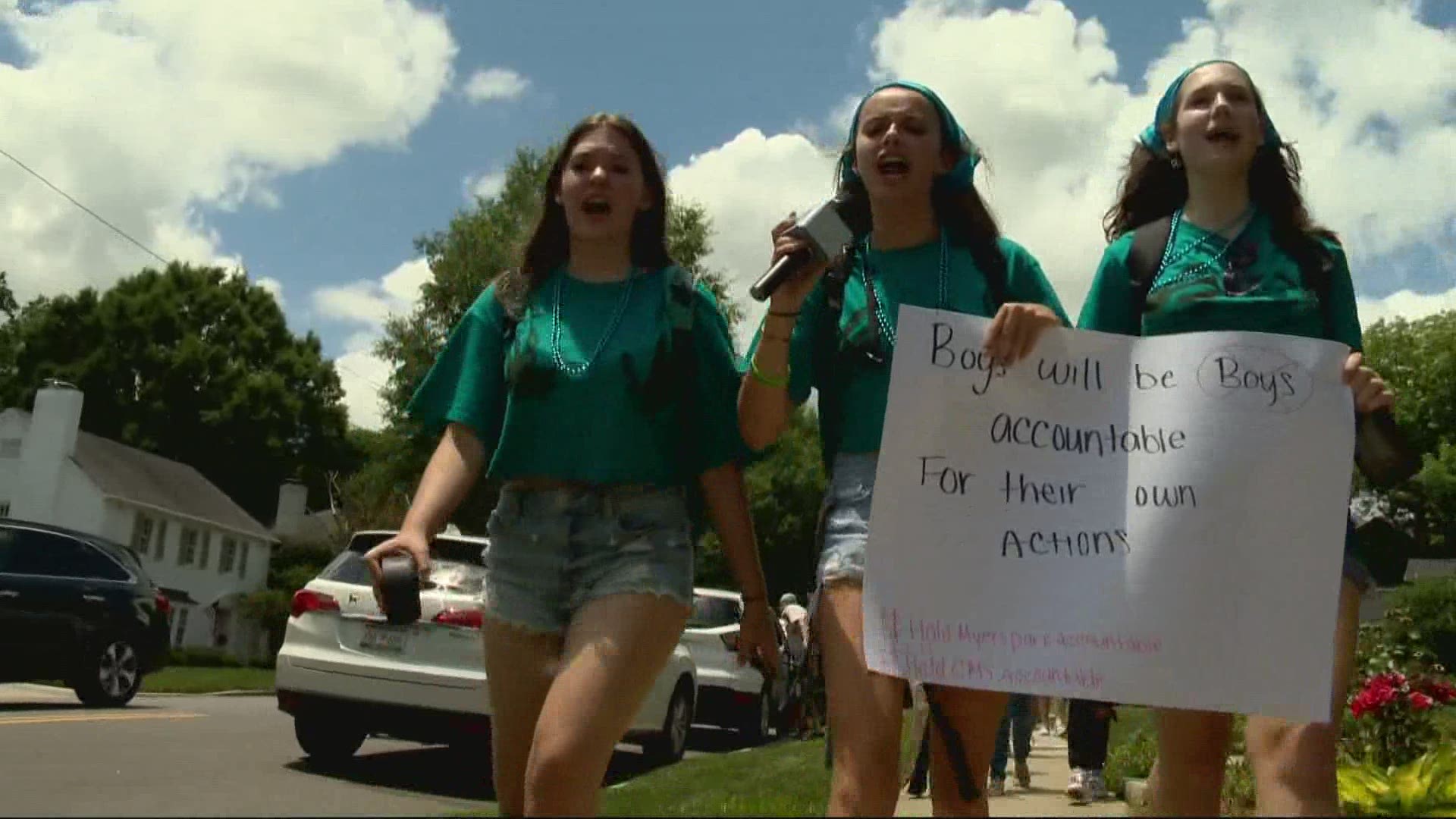 CHARLOTTE, N.C. — Standing under the arches at the front of the pinnacle high school in Myers Park, dozens of current and former students called for accountability and change after years of what they claim are cover-ups of sexual assaults on campus.

Scores of Myers Park High School students marched through the streets of South Charlotte Tuesday afternoon, carrying signs in support of sexual assault survivors and calling for the leadership at the Charlotte-Mecklenburg School to be fired.

“I do not feel safe at Myers Park,” said Lily Russell-Pinson, a rising senior at the high school. “I have at least five friends that have told me, ‘I’ve been assaulted.' 'I’ve been harassed.' 'I’ve been groped at Myers Park.' To the point where I don’t want to walk alone.”

While students, parents and community members looked on, several teenagers and young women who identified as sexual assault or gender-based harassment survivors shared their traumatic experiences.

Among them, Nikki Wombwell, a former student at Myers Park High who said she was raped in the woods outside of the school in 2014. She was 15 at the time of the incident. Now 22, Wombwell was known as “Jill Roe” in a lawsuit filed against CMS and Myers Park leadership, as well as the school resource officer, and the former police chief, claiming the school leadership swept the crime under the rug.

“I was raped not far from where we are standing now,” Wombell said, looking over her shoulder at a wooded area behind her. “When I tried to report this assault to the school, I was disregarded, victim-blamed and ultimately silenced into not seeking justice by principal [Mark] Bosco and the rest of CMS.”

When word spread around the community about what happened to Wombwell, more teenagers came forward sharing their own experiences.

“It’s trauma, it stays with you for the rest of your life,” said Serena Evans, a former student at Myers Park. “I thought that my rape got pushed under the rug mostly because my rapist was a star football player.”

Evans told the crowd she now believes that the lack of response by the school was a result of a failure in school leadership.

“Imagine being told by your principal and vice principal the same words that you were told while you were being raped: ‘You can’t talk about this with anyone. Let’s keep this between us,’” Evans said, fighting tears.

The students planned to hold the protest at the front of Myers Park High School but were told they had to get off of school property, according to event organizers.

The demonstration Tuesday was organized by a pair of current students at the school who began a grassroots effort to enlist peers and community members.

Students sharing stories of sexual and gender-based harassment at Myers Park High, claiming nothing was done by teachers/admin pic.twitter.com/cZO47TX1IL

“Us, the students, we’re tired of it and we want to see a change in the administration and the community,” said Aidan Finnell, 16, one of the organizers of the protest.

Grace Morton, another one of the students who organized the event, said she is also a survivor of sexual assault. She said she understands how difficult it can be for victims to speak up.

“In order for things to change, you have to come forward because if you don’t, nothing is going to happen,” she said.

The students are calling for an independent, thorough investigation of the allegations and the school administrators. Demonstrators also called for a change to the school curriculum to educate students about informed consent.

“What happened to me was not an isolated incident,” Wombwell said. “It was a symptom of a system that seeks to put its own reputation above the well-being of its students."

WCNC Charlotte reached out to CMS for comment both about the demonstration and about the allegations that sexual assaults were not taken seriously. The school district issued the following statement in response:

"CMS encourages students and families to share their voices about important topics such as this.

The entire district shares a commitment to making sure our schools are safe and positive environments that support learning."