It was one of the largest and deadliest maritime tragedies in history, but no one was ever able to recover the ship or the victims. 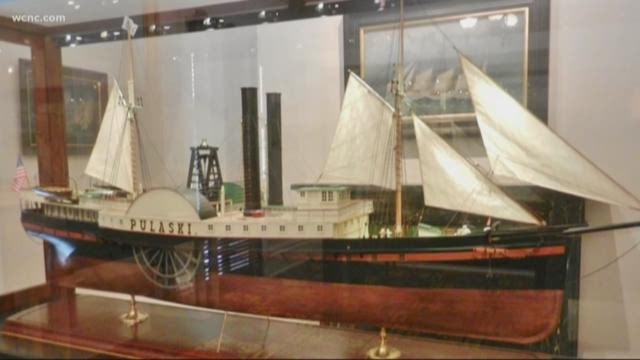 CHARLOTTE, N.C. -- Divers believe they have found the remains of a luxury passenger ship that sank in 1836, right off the coast of North Carolina.

It was one of the largest and deadliest maritime tragedies in history, but no one was ever able to recover the ship or the victims.

“People were lost,” Joseph Schwartzer, director of the NC Maritime Museum System said. “Men, women, children. It was quite a dramatic event.”

“The Pulaski is one of those wrecks that we know occurred,” Schwartzer said, “but no one had any idea where it was.”

It was a voyage from Savannah to Baltimore, a sophisticated passenger steam ship, one of the first ever.

“This was a very well-built vessel and it was described as being quite elegant,” Schwartzer said. “There were very wealthy and influential people on board, it was kind of a who's who.”

Among those passengers: the prestigious Lamar family, and a New York congressman.

The story was covered across the nation but the Pulaski, and more than 100 passengers who were on board, were never seen again.

“No one had any idea where this vessel was, all we knew was the story.”

The ship they’ve uncovered, just 40 miles off the coast of North Carolina, matches exactly what the Pulaski would have looked like and is filled with treasure dating to that exact time period.

“It's a pretty sure bet we're working on part of the Pulaski,” one of the divers is heard saying on a video shot during their expedition.

The team is slowly pulling up artifacts which will be studied to determine if this really is the Pulaski. If it is, experts say it will be one of the most significant discoveries in North Carolina history.

“It would complete the picture knowing exactly where this was,” Schwartzer said. “Everyone knew about the Titanic, everyone saw pictures of it, but when they actually found the remains of the vessel it added a whole new dimension to that story. This, I would think, will have a similar impact.”