A C-17 flew over the Charlotte area Thursday as part of a nationwide effort to recognize frontline workers. 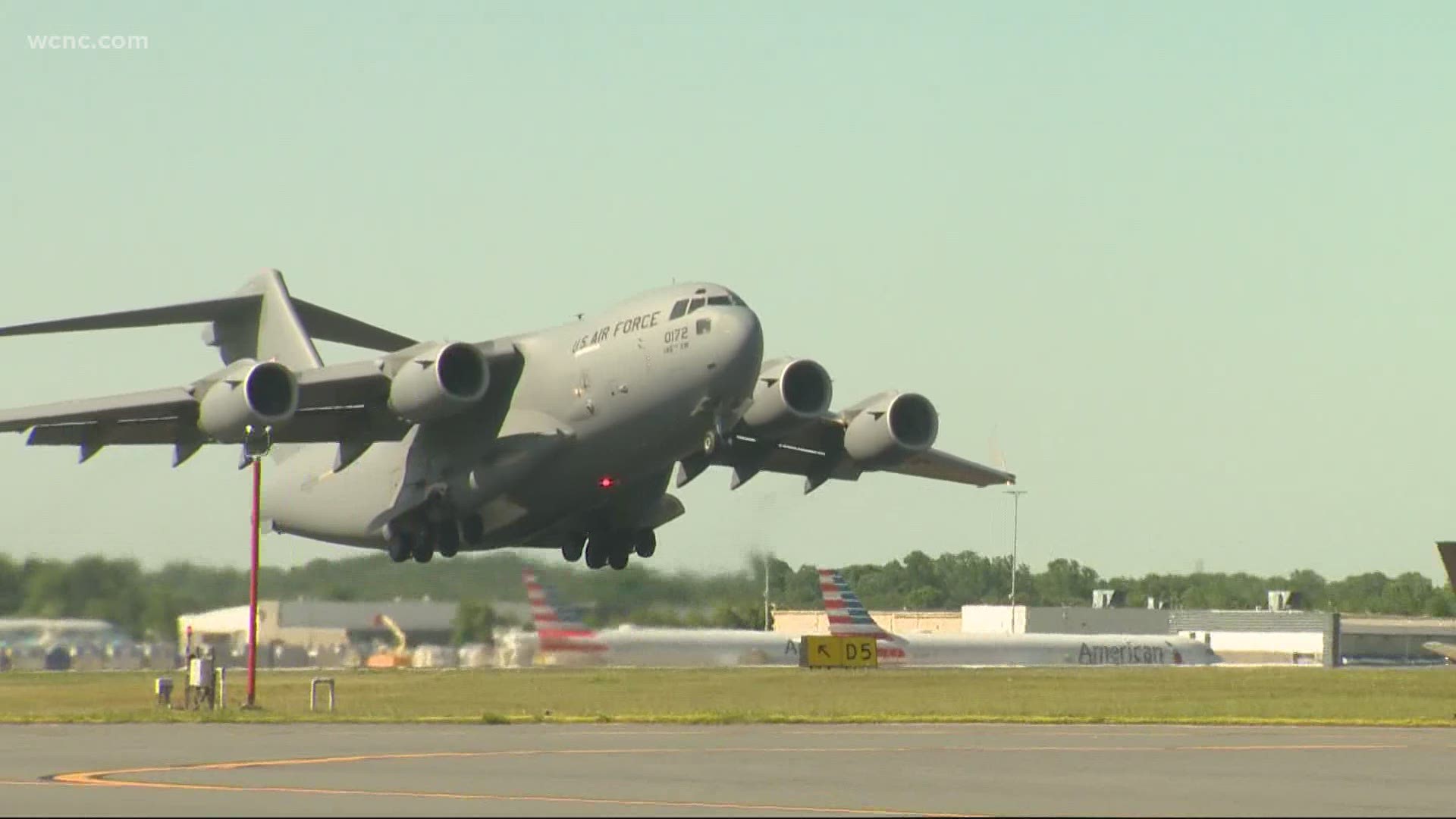 People and organizations from all across the country have been showing their gratitude for the frontline workers who have been risking their lives to help fight the coronavirus.

On Thursday at 10 a.m. the C-17 departed from the Charlotte-Douglas International Airport and traveled to the Asheville area, Winston-Salem, Raleigh-Durham, Goldsboro, Greenville, Jacksonville, Wilmington and back to Charlotte.

"This Air Force Salute is to demonstrate the Department of the Air Force’s continued readiness during the national COVID-19 response, while saluting the American Heroes at the forefront in our fight against COVID-19. These flyovers will incur no additional cost to the taxpayers and are being conducted as part of regularly scheduled training."

The route covered cities from Asheville to the coast and in between.

"We thought it appropriate as Airforce members to use the flyover as a salute to those people who are, you know, essential employees, nurses, doctors, those battling the COVID-19 pandemic on the frontlines,” said Major Joseph King, the pilot.

King said the Air National Guard typically does nearly 1,000 flyovers a year for patriotic events, holidays, and sporting events. This time, they wanted to do one as a tribute to those on the frontline of the pandemic.

King said the flyover is a way to salute the community and is considered a sign of respect.

As the plane made its way back into Charlotte, it passed over a Harris Teeter Distribution Center, Novant Health Presbyterian, and Atrium Health. Its final pass made a loop around Second Harvest Food Bank of Metrolina as a tribute to the volunteers and staff working hard to feed the community.

"The fact that they're doing that to honor us, the Air National Guard, and just the fact that we're included with people like our healthcare responders and our first responders is amazing to me because those are the people that we really want to send our admiration out to,” said Kay Carter, CEO at Second Harvest Food Bank of Metrolina.

With children out of school, seniors staying home, and the escalating unemployment rate, Carter said volunteers and staff have been working nonstop to fill the needs of the community.

"The need is just absolutely unlike anything I've ever seen,” Carter said, “and I've lived through more hurricanes than I can count."

Carter said the staff is packing food boxes around the clock to keep up with the demand. She said the food bank could mostly use monetary donations through this time or food donations of all the same items to cut down on sorting.

Thursday's flyovers were part of a nationwide effort to recognize healthcare workers, emergency responders, food industry, and other essential workers.

Route of Flight:
All times are subject to change.