Currently, there’s no state or federal law that covers job security for employees under quarantine. 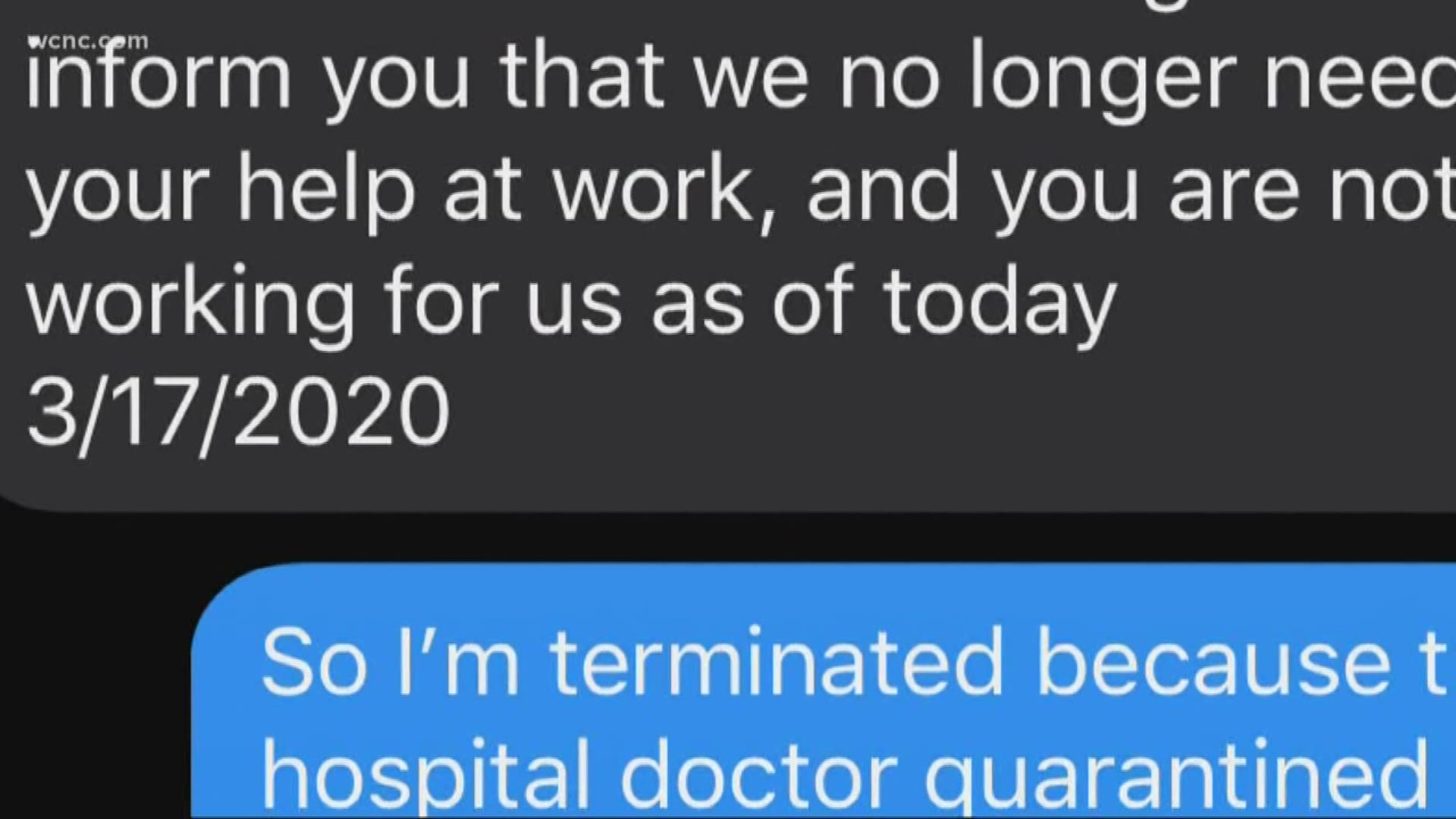 HICKORY, N.C. — A Charlotte-area woman says she believes she was fired from her job at a Hickory, North Carolina dental office because she is presumed positive for COVID-19, and was ordered to quarantine until the test results come back.

Currently, there’s no state or federal law that covers job security for employees under quarantine.

Some say that’s not fair, especially now that it’s becoming so real for so many.

“I am physically quarantined by the hospital because of this outbreak," said Macy Roden, who until recently worked as a dental assistant in Hickory.

Roden says she is quarantined at home, waiting to learn if she’s tested positive for COVID-19.

She says she went to the ER with flu symptoms Saturday. The flu test came back negative but her symptoms persisted, so she says the hospital tested her for the coronavirus.

“My COVID test was sent off and it could take 4 to 6 days because they don’t have the ability to do the rapid test yet,” Roden said. “They did quarantine me on Monday [March 16th] until the 30th or until my test comes back negative."

Macy, a dental assistant, says she immediately sent over the medical documentation and quarantine order to her employer.

In response, she got a late-night text from her boss, firing her.

“It basically says we regret to inform you that we no longer need your services and you’re no longer working for us as of today," she said. "I said so you’re terminating me because I am quarantined by the hospital? Because I could be jeopardizing other people’s health?"

WCNC Charlotte reached out to Roden's former employer, who stated they had no comment.

Roden says her former boss is now citing poor performance as his reason for terminating her.

“But I feel like I’ve never done anything to jeopardize my job," Roden said. “It just seems fishy."

FMLA and ADA laws may protect some COVID-affected employees from termination, but usually only in severe cases, and likely only for confirmed positives.

There is no other real protection in place for people like Roden, who believe they’re doing the right thing by staying home, but could be out of a job because of it.

"We are in people’s faces, we’re in their mouths, touching," Roden said. "I don't think it's fair. If it wasn’t for my tax money and me paying my bills ahead of time with my tax money I would be really screwed right now. I just feel like it’s not right.”

Federal FMLA provides employees up to 12 weeks of protected leave in the case of a serious health condition. Right now there is a lot of debate as to whether being under quarantine for a presumed or confirmed COVID-19 case qualifies.

TIPS: Ways to cope with coronavirus anxiety while isolating