The director of the CDC warns the second coronavirus wave could come at the same time as the seasonal flu this winter. 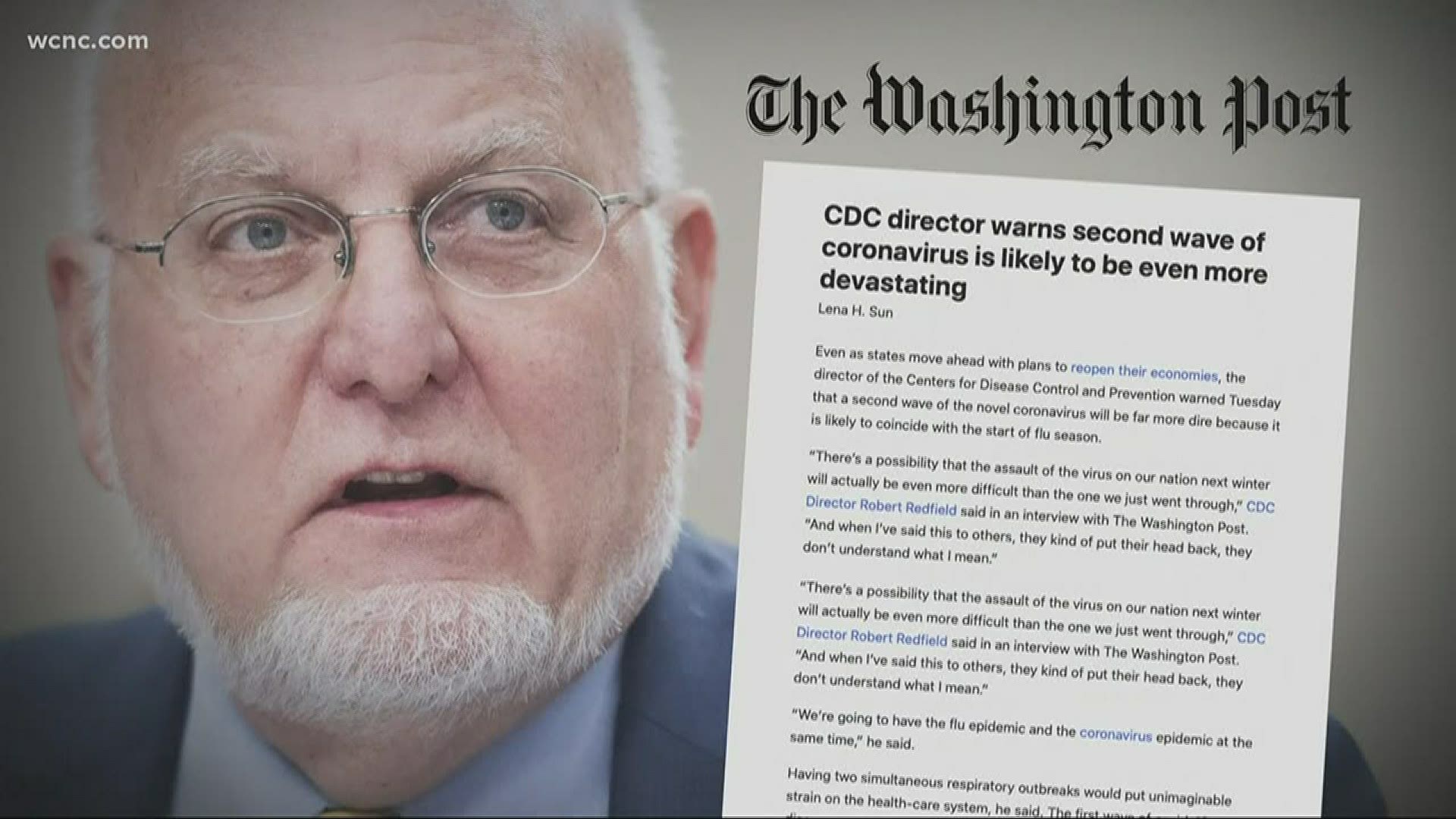 CHARLOTTE, N.C. — The director of the CDC told the Washington Post Tuesday a second wave of the coronavirus this winter could be more dangerous because it could hit at the same time as the seasonal flu.

Standing alongside President Donald Trump Wednesday, Dr. Robert Redfield tried to "straighten out" those comments that were misquoted in the "fake news," the president said.

Redfield tried to explain his comments were meant to say the second wave will be "more complicated" and not "more difficult."

"There’s a possibility that the assault of the virus on our nation next winter will actually be even more difficult than the one we just went through,” Redfield said in his original interview, which he confirmed Wednesday was an accurate quote. "We’re going to have the flu epidemic and the coronavirus epidemic at the same time."

As some states, including South Carolina, start to reopen, a warning from local doctors: take it slow as the threat of a second wave of coronavirus looms.

“I expect return to normal life will eventually happen, but it will be fairly slow. You'll get back to things that are relatively solitary or in small groups sooner than you can get back to things like schools, churches, maybe large classes at gyms and certainly sporting events,” says Dr. David Geier, who works in the Carolinas.

RELATED: South Carolina schools to remain closed through the rest of the school year

He says it is crucial that the country takes steps to improve its testing capacity in order for health workers to identify cases early, conduct contact tracing and isolate potentially infected individuals.

What to do in the meantime to stay safe may sound like a broken record by now, but numbers show it's working.

“From an individual standpoint you prepare by basically assuming you're still at risk for contracting it and spreading it to others. So, you maintain social distance. If you have medical problems maybe you don't go out into crowded areas,” says Dr. Geier. He says it’s good to remember there's only so much you can control.

Boost immunity by eating healthy, exercising and getting enough sleep.

“If everybody does that, we should be able to keep the overall spread of this coronavirus relatively contained in the fall,” says Geier.

Experts say this highlights the importance of getting a flu shot next season so less people are hospitalized with the flu and more resources could be reserved for this possible second wave.

The Associated Press contributed to this report

RELATED: He fought COVID at the hospital that saved his life as a baby. Now, he's thanking doctors with $14K.