County officials said the policy is still being worked on and will likely be done and signed early next week. 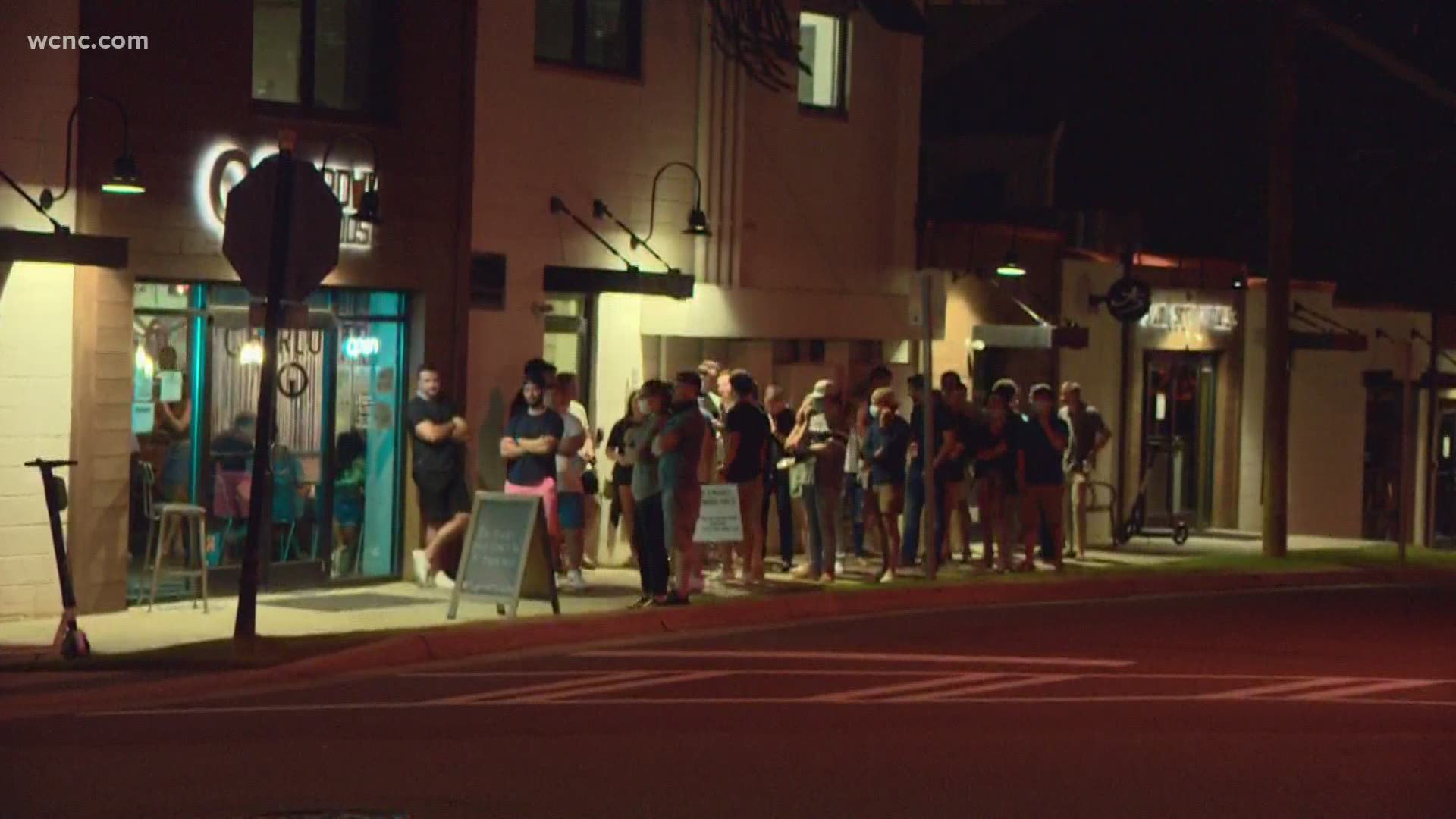 After seeing videos shared on social media last weekend of crowded establishments, Mecklenburg County Manager Dena Diorio said the City of Charlotte, as well as the towns in the county, are looking into measures that were recently implemented in Orange County, North Carolina and in South Carolina that limit alcohol sales after a certain time at restaurants and bars.

"That is one of the topics that has come up in recent days is whether or not we should take a look at how alcohol sales are done later at night to try to target some of the demographics that we know are not always compliant,” Diorio said Tuesday.

The majority of positive COVID-19 cases in Mecklenburg County come from the 20 to 39-year-old age demographic with 44.3 percent.

The videos shared on social media over the weekend are causing concern among county and city leaders.

Meanwhile, in Mecklenburg County local health officials are working on a similar action.

“Our policy folks had that conversation this morning and we are continuing to talk about it,” Mecklenburg County Manager Dena Diorio said. “We’re not ready to make a recommendation, but we’ll continue to talk about it over the next couple of days.”

The Director of the CDC, Dr. Robert Redfield, did not comment on specific local incidents but did say he supports further restrictions.

Local health officials said they’re keeping a close eye on the impact of the new executive order in South Carolina, but at this point are not taking any action.

With tables spaced out into the parking lot, Dilworth Neighborhood Grille has been trying to make the most out of the new pandemic procedures.

The owner, Matt Wohlfarth, said the only difficulty in keeping people separated comes at the bar.

"The bar is a little different because the whole goal of going to the bar is to meet other people,” Wohlfarth said, “so I do see a difference there."

Wohlfarth’s solution is spacing out chairs, using “X's” to keep parties separated, and discouraging crowding at the bar.

"You can sit here, but you can't sit here,” Wohlfarth said, referring to his setup. “We pulled away most of the bar stools. We encourage people to sit at the tables, even if they're just drinking."

He said he is worried that places that aren’t following the rules may ruin things for all restaurants.

“If you don't want to be like Florida or Texas or California or Arizona, I mean they're going to shut us down again,” Wohlfarth said. “They're going to do that, so please stop."

Wohlfarth said his restaurant would stand to lose several hundred dollars in alcohol sales if the hours for alcohol sales are cut back. He said he doesn’t think the additional measure is a solution to the problem.

"All you're going to do is force is force them to start drinking earlier, so we'll have twice as many people in the bar from 5 to 10,” Wohlfarth said. “It's…that's not a solution. A solution is to go after people who have repeated violations."

County officials said the policy is still being worked on and will likely be done and signed early next week.

It will be another restriction as the White House asks our state and others to start backtracking on our reopening plans.

RELATED: COVID-19 cases appear to be on the rise among uninsured in Charlotte