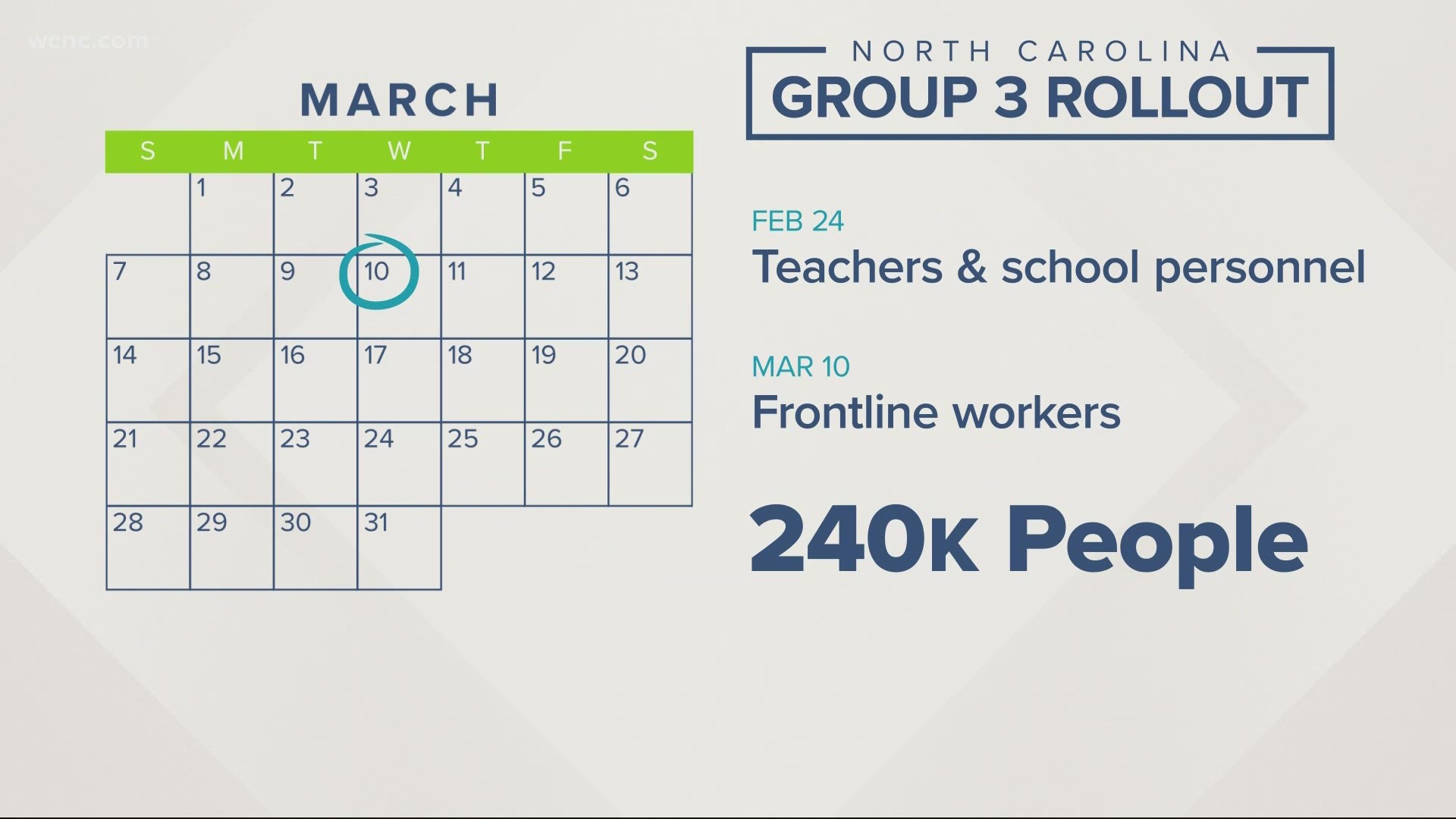 CHARLOTTE, N.C. — Mecklenburg County Health Director Gibbie Harris said the county will start vaccinating K-12 teachers and others that are in the school system starting Feb. 24.

I want to re-emphasize the fact that this is great news, but it's also very challenging," Harris said. "The amount of vaccine available to us is still very limited."

Cooper said the vaccines will start with educators, child care providers and school personnel. About 240,000 people are estimated to be in this group.

He said they will then expand to additional Group 3 front-line workers on March 10.

Harris says all we can do is to ask those other essential workers in Phase three to just to be patient a little bit longer. She says they are all important.

She does not have an exact number of teachers/childcare workers in Meck Co. @wcnc

“I am grateful to all of our educators and school personnel for going above and beyond in this pandemic to care for children and help them continue to learn,” said Cooper. “Starting with a smaller number of Group 3 front-line essential workers helps providers streamline vaccine distribution effectively and efficiently.”

In a news briefing on Wednesday, Harris said there was evidence of large gatherings over the weekend in Mecklenburg County. She said some of those gatherings were from Super Bowl parties and some were not.

"Unfortunately many of those folks did not have masks on and there was very little social distancing," Harris said. "I want to re-emphasize that those individuals should be quarantining and not exposing themselves to others."

Harris said our numbers, although on the decline, are still higher than our peak last summer in July. She said she won't be comfortable getting back to normal until 80-85% of people are vaccinated.

The extended health directive for Mecklenburg County will remain in effect through Feb. 28. The directive, which was extended by Harris last week, includes following Cooper's daily curfew from 10 p.m. until 5 a.m.

RELATED: She didn't have any COVID-19 symptoms when she tested positive. How did she die just hours later?

Harris has been a vocal supporter of in-person learning in schools but said they want to make sure it's done safely. The CDC issued a report last week saying in-person instruction can be safe if certain protective measures, including masks and social distancing, are followed.

On Tuesday, the North Carolina Senate passed a bill that would require school districts to provide in-person learning option for students K-12.

The bill titled 'In-Person Learning Choice for Families,' passed in a 29-15 vote.

The bill gives local school districts the choice between providing in-person learning under either Plan A, Plan B, or a combination of both. All families are still able to opt for remote learning if they so choose.