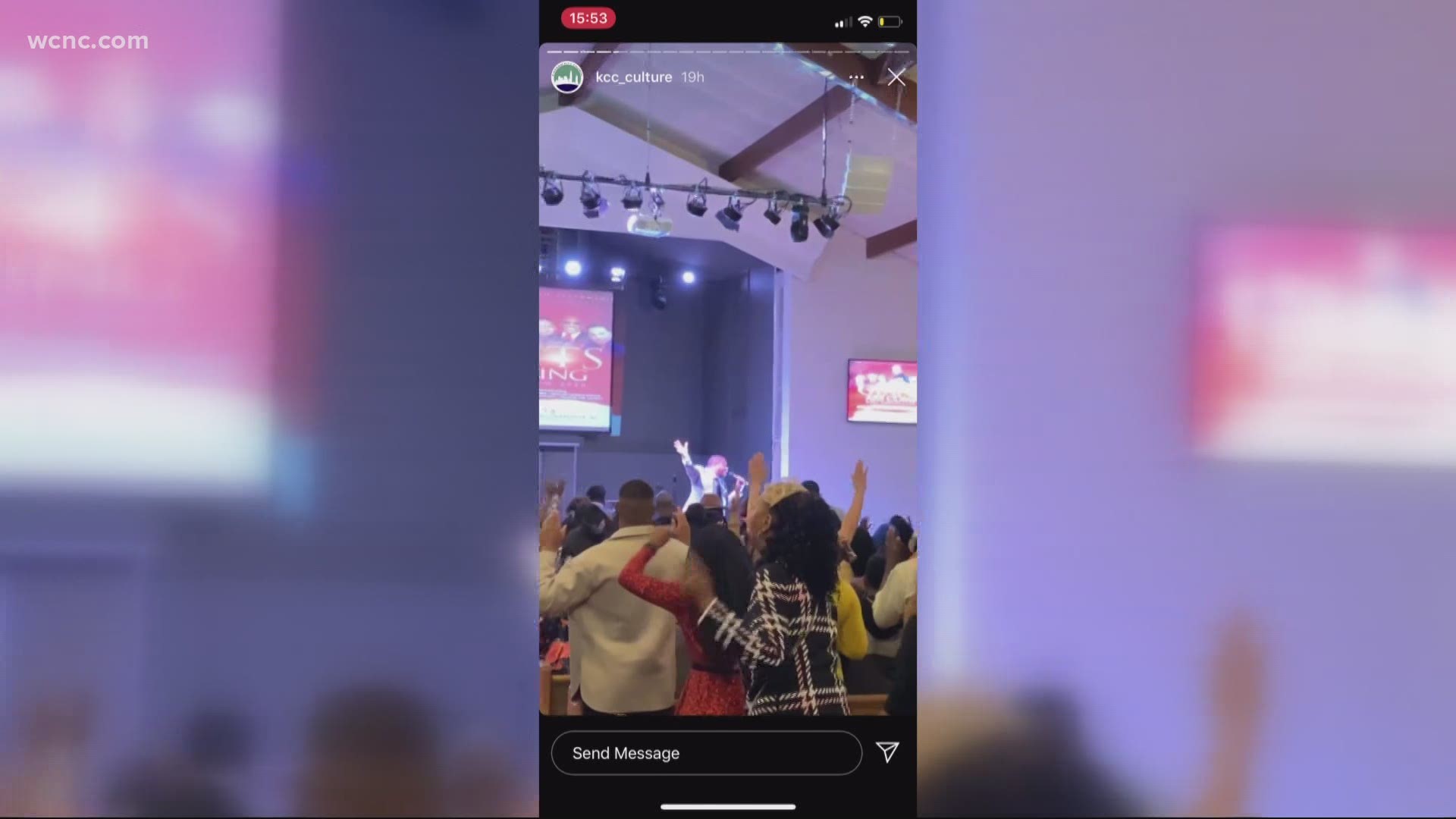 CHARLOTTE, N.C. — Hundreds of worshipers are packing the pews during a pandemic in a northwest Charlotte church, drawing concerns from Mecklenburg County's top health official as the county continues to battle with its first major church outbreak at United House of Prayer on Beatties Ford Road.

Congregants could be seen inside a jam-packed sanctuary at Kingdom City Church's 3rd Holy Convocation, "The Giants Are Coming," according to public social media posts seen on KCC Charlotte's Instagram page on Monday.

The video, shot by someone inside and posted to the story section of the church's Instagram page, shows worshipers singing. Barely anyone could be seen wearing a mask, and nobody seemed to practice social distancing.

The church's website said Monday night's prayer was held at The Creek Church, in the 1400 block of Briar Creek Road. On Tuesday night, a line was crowded with people outside KCC Charlotte on Brookshire Boulevard.

Some worshipers were seen wearing masks, while many were not.

"We became aware that this event was going to happen a week and a half ago," said Gibbie Harris, health director for Mecklenburg County. "We have had multiple conversations with the pastor about our concerns."

Harris said during those conversations, KCC Charlotte leaders maintained they did not want to contribute to the spread of the virus and were on board to do what they could to lower the risk.

RELATED: North Carolina to remain in Phase 3 as COVID-19 cases continue to rise

However, Harris said she was concerned by what she saw in social media videos after the first night of the convocation.

"Yeah, we have concerns about what's going on out there," Harris said. "If they truly aren't social distancing and aren't masking, we have enough virus in our community to that it would be very unlikely that there's not at least one person out at that church who is infected."

The convocation at KCC Charlotte is supposed to continue for a total of seven days, through Nov. 15.

"Actually at this point, we've done all we can," Harris said.

Mecklenburg's lead health official feels her hands are tied. Churches have protections, and thus, have no COVID-19 restrictions. The county and state have offered recommendations to places of worship.

"Obviously faith communities are not included under the executive order. So, that does limit what we can do at this point because we don't have any evidence of transmission," Harris said.

The downfall is what happened at United House of Prayer on Beatties Ford Road in October. A convocation weekend was held, and an outbreak of COVID-19 ensued.

On Tuesday, Harris told county commissioners the impact of that October church event grew. Nine people have died in cases traced back to the United House of Prayer events and 208 coronavirus cases are linked to it, according to data Harris provided.

Harris did enforce an abatement of imminent hazard order for the United House of Prayer, ordering them to cease all in-person gatherings for a period of time.

"The rationale behind using imminent hazard with United House of Prayer was that we were already seeing, or in the middle of a pretty large outbreak from that event," Harris said. "And they had planned an additional event while we were still in the outbreak."

That order has since expired.

Now, Harris conceded the health department will have to wait until cases pop up to take any further action towards KCC Charlotte.

"Without evidence of an outbreak it is sort of difficult to think about implementing something like that again," she said. "We'll have to see what happens over the next 12 days."

Harris said the events being held at KCC Charlotte have the potential to give her DeJa'Vu.

"I'm continuing to hope that there is some semblance of willingness to comply and we'll probably attempt to have more conversation with the church (KCC Charlotte)," Harris said.

WCNC Charlotte tried calling KCC Charlotte, left a voice message, and reached out via social media. The church has not responded to those efforts.

At the church on Tuesday night, WCNC was denied an in-person interview with church staff.