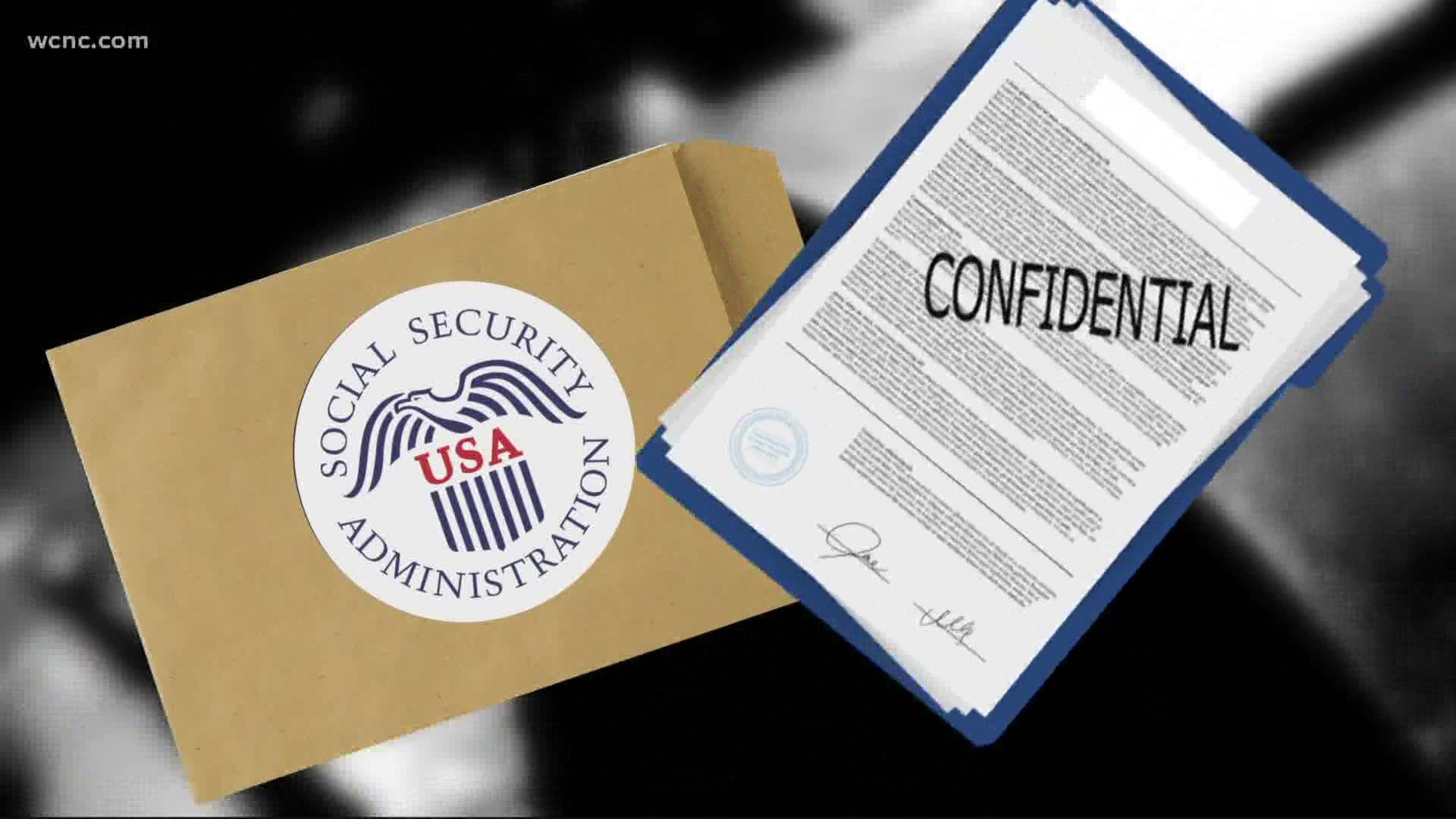 CHARLOTTE, N.C. — Despite mistakenly sending confidential personal records to the wrong people, the Social Security Administration refused to offer free credit monitoring to those whose identities were compromised, but the federal agency appears to now have changed its stance.

As we reported Friday, several people from Charlotte confirmed SSA sent their original documents to other people.

We've since learned Martha King's records, including her bank account information, ended up mixed in with an Alabama woman's documents. Her son said his mom mailed the records to SSA as part of an effort to collect survivor benefits

"I'm very frustrated," Terry King II said. "It was the original death certificate for my father. It was his birth certificate and my mother and father's marriage certificate, plus the form that my mom had to fill out with her name, social and date of birth."

Conversations with several people in Charlotte revealed at least four people were impacted by the mistake. An SSA spokesperson wouldn't reveal to @NateMorabito how many others were affected.
https://t.co/ZwwV014fqD

Much to Teri Pitts' surprise, the Bay Minette, Alabama woman received the records.

"I had no idea who this person was," she said. "I feel horrible. This is stuff that is personal information that I should have no knowledge of."

Shocked, Pitts said she called SSA, which recommended she either shred the documents or return them to the office. After talking with King, she said she feels more comfortable mailing them back to her directly.

"It's crazy," Pitts said. "This is how identities are stolen."

SSA originally blamed the mistake on employee error, apologized and promised to make changes to prevent future security failures. However, Brandi Soles said the agency refused to offer credit monitoring when she requested it, which left her feeling "vulnerable."

"Said that they wouldn't," Soles said. "They don't do that."

Rep. Alma Adams (D), NC-District 12, has since called for an investigation into the agency's mistake.

"It's not acceptable number one for any government agency to be doing this," Rep. Adams said. "I think an investigation is certainly proper, we'll follow up on it."

In years past, some federal agencies have offered free credit monitoring when they've played a role in a security lapse, but King said when he requested it, SSA didn't commit.

"We had to actually bring it up to even put the idea in their minds," King said. "It's kind of disturbing, especially for it being our federal government."

Late Tuesday, in response to WCNC Charlotte's questions, SSA listed credit monitoring as one of the steps the agency is now taking to help those impacted.

RELATED: 'My Social Security' website fully operational after issues over the weekend

"As we previously mentioned Social Security takes its responsibility to protect the information it maintains seriously," SSA Regional Communications Director Patti Patterson said in an email statement. "We apologize for any inconvenience this has caused. We are unable to discuss individual cases due to privacy laws. However, we can share that we have already begun taking steps to contact those impacted and secure the information, as quickly as possible. In addition, we are working with them to provide any necessary assistance, including that all documents are returned or replaced, assisting with blocking access to online Social Security records, and providing credit monitoring."

SSA continues to refuse to release the number of people affected by its mistake.

The agency is asking any person who has mistakenly received someone else's records to immediately reach out to their local Social Security office for guidance.