Thomas Davis helps others during COVID-19; looks forward to returning to the field for his 16th NFL season

Once football returns from the coronavirus shutdown, Davis will suit up for Washington and reunite with former Panthers head coach Ron Rivera in DC. 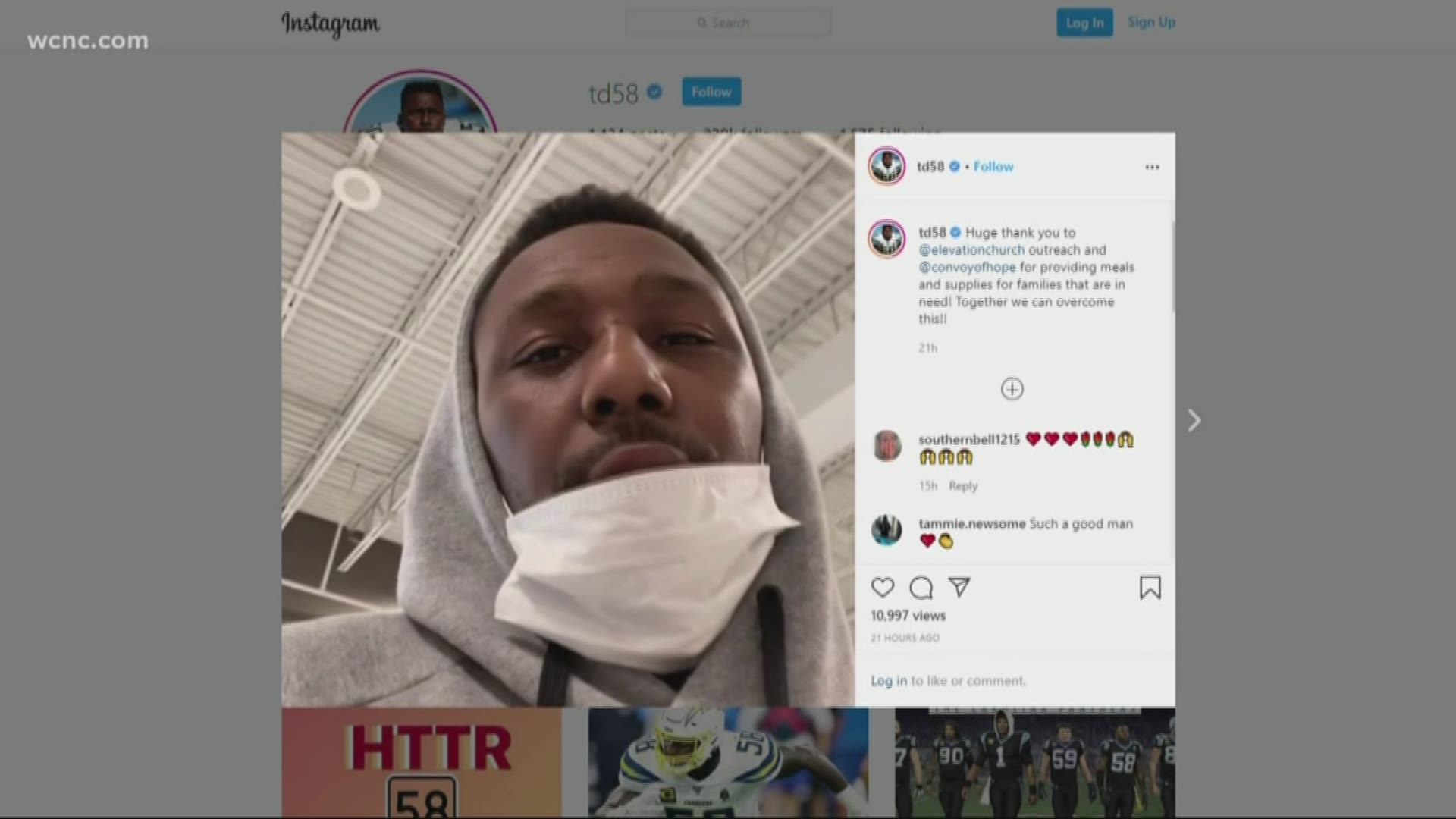 CHARLOTTE, N.C. — After 14 seasons with the Carolina Panthers, Thomas Davis spent last year playing for the Los Angeles Chargers, but the former Walter Payton Man of Year's home remains in North Carolina and his heart in giving back.

Davis is getting ready to play his 16th season in the NFL, something that few players ever get the chance to do, but while he's looking forward to returning to the field, he is currently finding ways to help those in need during the coronavirus pandemic.

Once football returns from the coronavirus shutdown, Davis will suit up for Washington and reunite with former Panthers head coach Ron Rivera.

We spoke with him about life during COVID-19, the next chapter of his football career, and the 14 years he spent in Carolina.

Q: Right now is such a crazy time in the world and I think that everybody is feeling that impact on some level. You and former Panthers teammate Jonathan Stewart got together this week along with Convoy of Hope and Elevation Church to give back to those that are really feeling it the most. What inspired you to do that and what was that experience like?

A: The goal is always to improve the lives of others and help out wherever we possibly can. Unfortunately, we are just in a tough situation right now where we are all being forced to stay at home and do things inside of our houses so that we are not becoming part of the problem and spreading this virus. Sometimes duty calls and you're called upon to do things that are unconventional given the circumstances. We just answered the call of duty. We went out and got things they were giving out, the food supplies, the different hygiene kits and we were able to supply families there were in need right now in this crisis with those products. 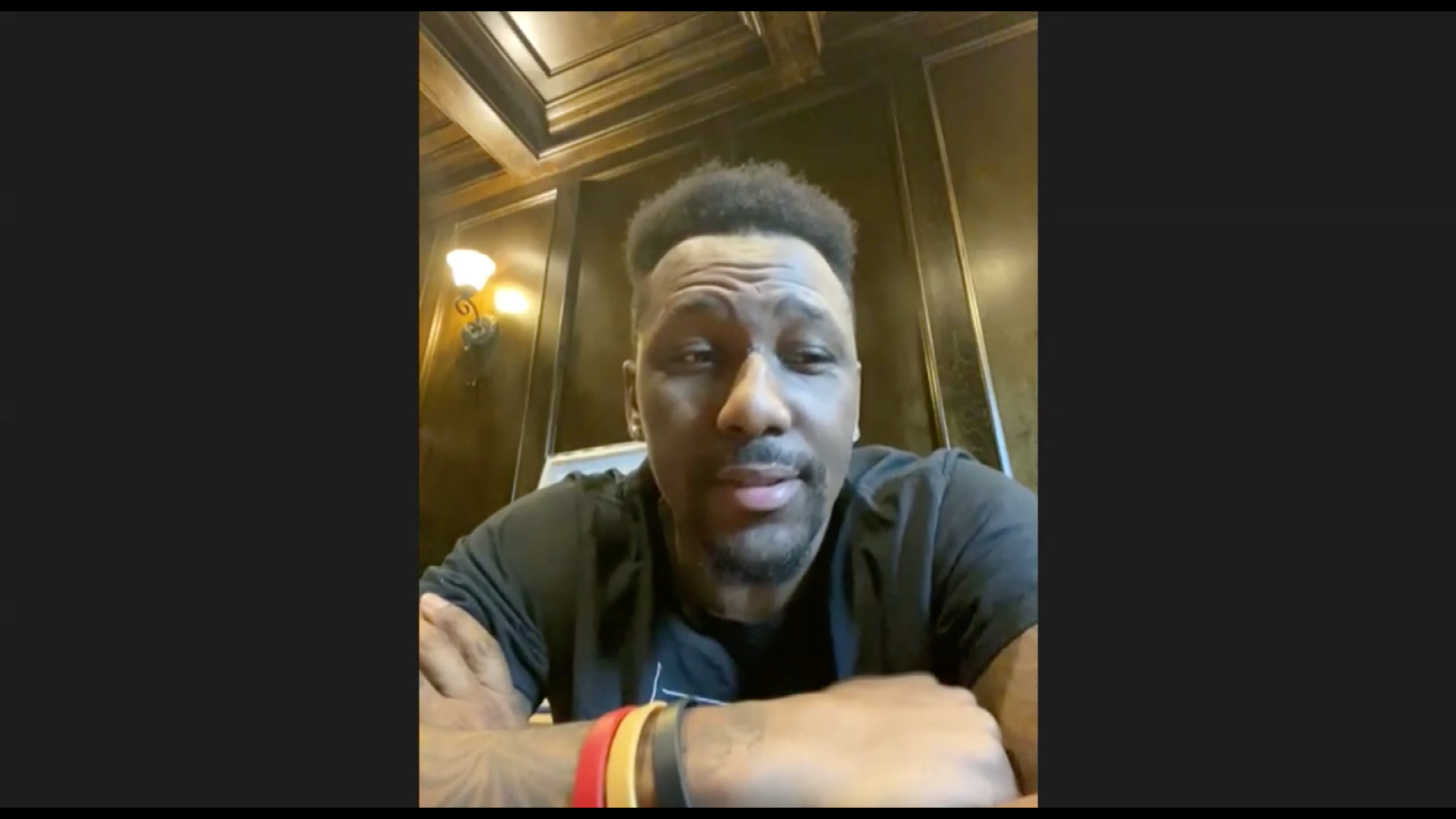 Q: For you personally what has COVID-19 been like for you? How's that impacting your daily life, are you even thinking about football right now, how are you training?

A: COVID-19 has definitely put us in a weird space kind of being stuck in the house like we talked about. Also, from a job standpoint, from a football standpoint just signing with the Washington Redskins this offseason and not having the opportunity to go visit the team, not having the opportunity to really go up there and take the physical it's a new world. It's a new space that we're all in as NFL players. It's something that we're adjusting to, the teams are adjusting to. We just have to understand as players at some point it's going to come back around. It may not be the time frame we were expecting, but it's important for us to be pros and take care of ourselves.

Q: When you hear year 16 for Thomas Davis is that hard for you to believe? What thoughts come to mind?

A: It's crazy to think I'm getting ready to enter my 16th year into this league. Knowing that when I first came into the league my goal was to make it 10 years, hit the 10 year mark, but also just dealing with the injury history that I had. The uncertainty

after tearing my ACL for the third time, but just to know that I've been blessed to be in this position that I'm in to 1) still have the opportunity and ability to play but 2) to also still be wanted by a team, my services to be wanted is definitely something that I'm excited about, that I'm looking forward to. If you'd asked me two or three years ago would I have put on another uniform my answer to this day would still be no, but now I'm getting ready to put on my third uniform in three years. It's exciting.

Q: You're going to Washington and reuniting with a lot of familiar faces including Coach Rivera. How excited are you for that?

A: I'm super excited to be reuniting with Coach Rivera. I know him very well, he knows me very well. I know what he's expecting of players, and I know what kind of leadership he's going to give us. I'm just really looking forward to being back with my guy and hopefully just going in and being a huge part of his success in Washington.

Q: I read in an interview that you did you talked about the culture change that you expect Rivera to come in and implement - what do you think year one will be like for him there?

A: I think year one is going to be good because when you look at Coach Rivera and his coaching style and how he operates I think it's going to be really good for that team. When you look at that roster, they have a ton of really good football players and Coach Rivera has the unique ability as a head coach to bring the best out of every player. I'm really looking forward to seeing how he operates with that roster.

Q: What's left? What are some boxes that you want to check in your playing career?

A: For me it's still chasing that pursuit for that Super Bowl ring. That's the reason why we continue to play this game. I know Washington has a lot of rebuilding to take place right now, but I feel like any given year you can be that team. You look at the San Francisco 49ers and the season that they had before they actually made it to the Super Bowl this year. They were a team that ended up with the number 2 pick because they didn't have a very good season. It's all about putting the work in in the off-season and coming together and that's what they were able to do. This could be that situation for us.

Q: When you take a minute and you look back at the 14 years you spent in Carolina - recently you posted the photo from "All or Nothing" and it has you, Luke Kuechly, Greg Olsen, Cam Newton, Julius Peppers, Ryan Kalil and now after the most recent events here no one from that era is left. Is that hard to believe?

A: It's shocking, honestly. When you think about the body of work. When you think about what we were able to accomplish as a group. I know we didn't ultimately win the Super Bowl. Like I said that's the reason why you play this game to win a Super Bowl and championships. Unfortunately, for us it didn't happen, but when you look at that group and what we were able to do for this city, for this organization I think that's going to go down in history. To look back and think it was just two years ago ("All or Nothing" was filmed) and none of those guys are there. . . I know the fans are disappointed they've expressed that, but Mr. Tepper has a vision. He has a whole new outlook on the direction that he's going with the team. I'm going to always be a Panther fan and I'm going to continue to wish them well.

Q: Overall when you look at your football journey and you left Carolina something you thought you would never do - what's it been like actually going and playing for other teams?

A: It was cool having the experience to go and experience something different than Carolina, but at the same time going to a super extreme from the East coast all the way to the West coast and playing for the Chargers. It was a good experience. I fell into a good situation being in a good locker room, having a good coaching staff, having some good trainers to take care of us. Unfortunately, we just got hit with the injury bug too many times. We lost 9 games or something like that by 7 points or less. It was definitely a learning curve, but it was an experience that I definitely appreciated being a part of and I'm looking forward to this new journey. My mindset each and every day that I wake up and I play this game I don't ever want to be that guy that kinda held on too long. When I look back at my experience with the Chargers, I feel like I was a productive player. I know that I was a difference-maker for that team and the coaches on the defensive side at least felt that way so I can take pride in that.

Q: Definitely. I was looking at some of the stats and your name - if it's not at the top it's in the mix - so to still be so productive going in to year 16 that says a lot about your play.

A: It just shows how much pride I take in playing this game. I'm truly competitive at everything. I love to compete, and I think that's one of things that has allowed me to be able to continue to play at this level at this point in my career. I definitely don't take it for granted. I wake up each and every day blessed and thankful for every opportunity that I'm presented with.