In an exclusive interview, Gov. Kemp said while the state is ready for the additional vaccine doses President Biden promised, he can't prioritize educators. 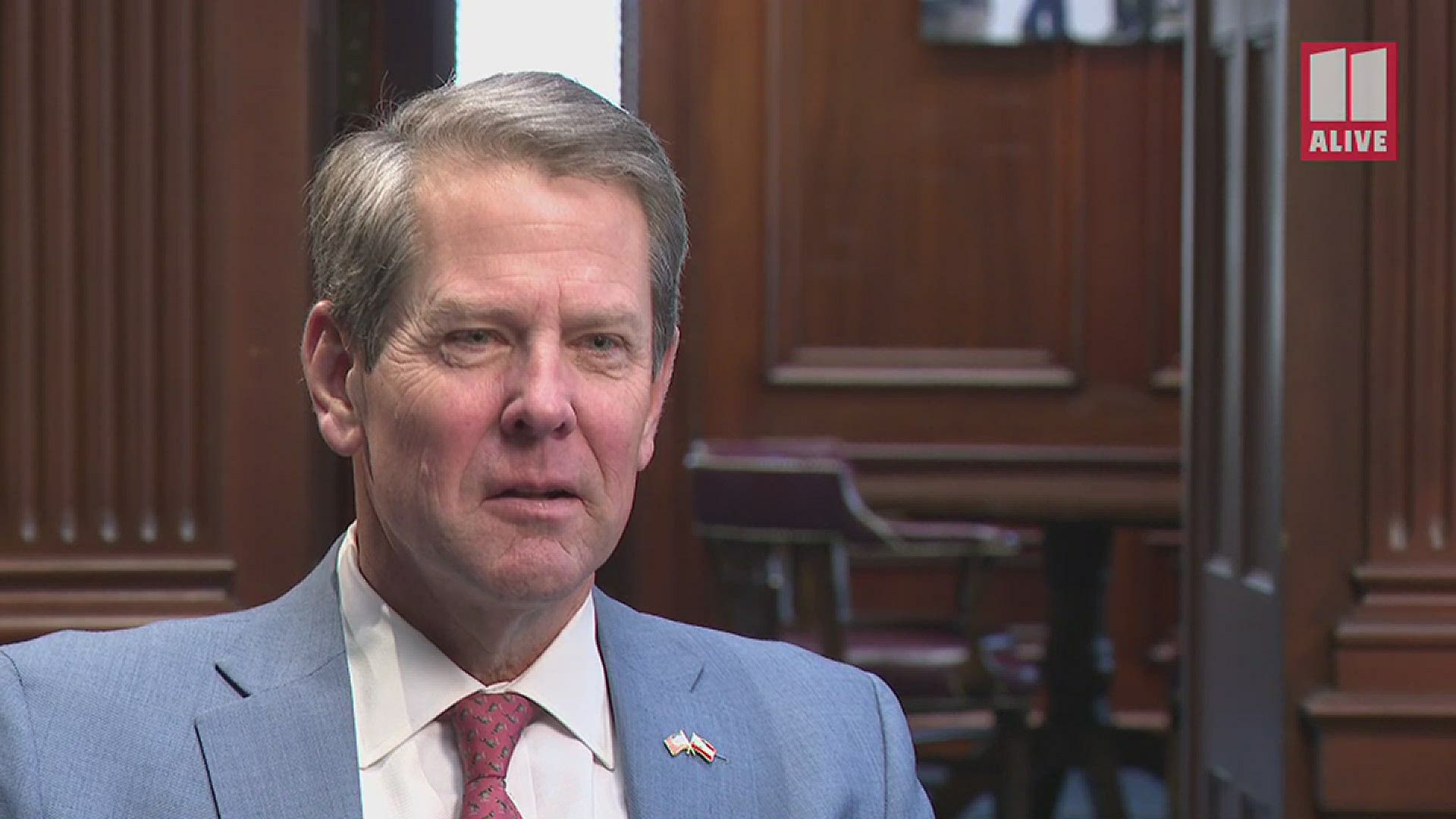 During their discussion, the governor explained the ramifications on the state's plans and answered questions that have been raised regarding possible vaccinations for public educators in Georgia.

Preheim started by asking Kemp what sorts of plans he has in place to utilize the additional doses as they come to Georgia.

"The good news is that we already have that plan in place," Kemp said. "We're planning for three weeks, or a month, or two months down the road, when we get a really big allotment of supplies."

Kemp said he is hopeful that either the Johnson & Johnson vaccine will be granted emergency approval or production will be ramped up of the Pfizer and Moderna vaccine.

"We are very thankful for the 25,000 doses a week that we are going to get," Kemp said. "That's going to be very manageable for us in the current system."

Kemp added that right now, there are "tons" of counties working with county health departments, regional vaccination sites, private companies and grocery stores, like Walmart, to distribute the vaccine.

"I mean everybody would like to have more vaccines," he added. "Everyone wants to get the vaccine out."

"We're just glad to get the vaccine out, get that going to where it needs to go," Kemp added.

The governor, reiterating a point from a Tuesday news conference giving an update on the vaccine rollout in the state, said officials are transferring 40.000 doses off the top of the state's allotment to nursing homes and skilled nursing facilities, "and we're now going to be able to move that into the expanded 1A category," he said.

"So, even though it's not new doses the state's been given, it will be new doses for the general population outside of the nursing home environment," he said.

Kemp admitted the balance of supply and demand in these early days of vaccine availability has been difficult, with demand far outstripping available supply.

"The infrastructure for scheduling has been challenging," Preheim noted. "Will that be able to change going forward?"

Kemp said he has been in conversation with Dr. Kathleen Toomey, head of the Georgia Department of Public Health, and her team, which is working closely with the governor to ensure the vaccine has been available statewide. He said at this point, it boils down to a supply problem.

We know that (after) Publix went online on Monday morning, all the slots for the week filled up in 45 minutes," the governor said. "So, there's a lot of demand out there. A lot of different people out there -- teachers, educators, restaurant workers, grocery clerks -- there's tons of reasons to expand the criteria, we just got to get the vaccine to be able to do that, and we'll do that as quickly as we can."

RELATED: Georgians hopeful to get vaccine as number of doses sent to state set to increase

Kemp said his team is working to get plans in place to ensure the doses are available across the state quickly.

"We will -- as I said -- use every resource we have to, including the National Guard to do that. But we also have a lot of private sector partners that can help us get going quickly," he added.

One other point that has come up is whether or not public educators and school employees can be included in the individuals under the expanded group 1A criteria for vaccinations.

"Based on the data we have, and based on the data I'm getting from Dr. Toomey, we just do not have the supply to expand the criteria right now," Kemp said, in relation to expanding the vaccination criteria to include public school educators.

Kemp has come under increasing criticism following an increased number of COVID cases - and deaths - among educators in school systems across the state.

On Wednesday, 7th District US Rep. Carolyn Bourdeaux (D-Ga.) wrote a letter to President Biden formally requesting that he specifically indicate that public school educators and employees be designated as critical workers, and, as such, make them eligible to receive vaccinations under the same categories as first responders and medical workers.

In her letter, Bourdeaux said that some governors, including Kemp, were insistent on opening schools, but not providing the protection obtained through the COVID vaccinations.

She also mentioned some of the challenges local school districts have faced, including high coronavirus transmission rates and teachers getting sick or dying as a result of COVID-19.

"When CDC came out, they made the recommendations as to who should be in (the first phase)," he said. "We opened that up with first responders, nurses, doctors - people that are literally on the front line dealing with COVID or potential COVID patients every single day. I had no choice whether to do that or not.

"It's like I went by a wreck on the way back to the Capitol," he elaborated. "Those firefighters, those ambulance drivers, State Patrol, local sheriff's department -- they didn't have any choice. They had to go respond to that. So I think it makes a lot of sense to get them vaccinated to protect them.  Also the elderly -- people over 65 -- this virus is killing more of them than people lower than that age group, so that's why we went to that criteria."

RELATED: Protests, backlash from teachers after deaths of 3 Cobb County educators in a month

Kemp then pivoted and pointedly called out a recent letter sent to him by metro Atlanta school superintendents requesting educators be included in the current phase of vaccinations as "pandemic politics."

"It has nothing to do with whether I would actually seriously consider the recommendation, because I've told them already - and they know that I'm not going to do that. And I don't have the availability to do that. So, they're trying to take the political heat off of them and put it on me," Kemp said.

The governor continued his defense:

"Have you asked them the question -- who they want to put in front of an ICU physician or emergency room nurse, working in a hospital dealing with COVID patients, or in front of a 65-year-old who gets this virus? I wouldn't put myself in front of that line. I would ask them that question," Kemp said.

In the end, Kemp said the situation calls for "tough choices."

"I wish I could say -- and I could -- I could say, 'let's open (the vaccine) up to everybody.' But then you're going to have three or four million people who are now on the (waitlist) as opposed to 1.5 million. Then you'll be getting people who will be getting in front of people who meet the existing criteria. So, it's unfortunate that happened, but they know where I stand, and I wish they'd have communicated with me directly as opposed to leaking a letter to the media."