'We're not out of the woods yet': Cooper to announce new COVID-19 executive order next week

North Carolina's coronavirus metrics are on the decline, and the state's current stay-at-home order is set to expire at the end of the month. 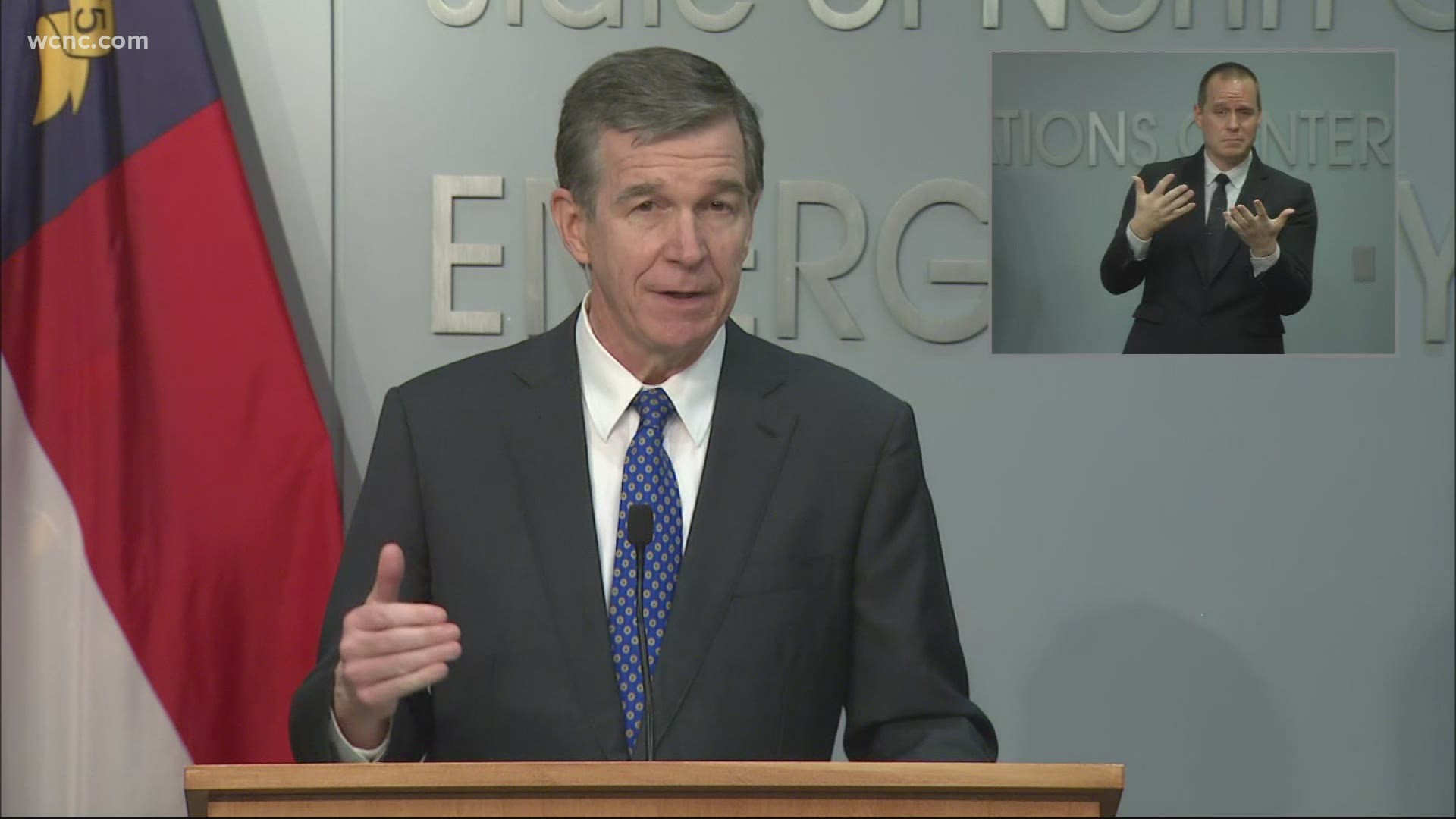 Daily cases, hospitalizations and COVID-19 test positivity rates have been seeing a steady decline for several weeks, but Cooper cautioned for North Carolinians to not let down their guard.

"We're not out of the woods yet," Cooper said. "The decline in case numbers and percent positive are lower, but they're higher than we want to see."

This week was the first time hospitalizations have dropped below 2,000 since early November. Cooper said he will consider these metrics when announcing the new order next week and may ease some restrictions on businesses. Cooper's current order, which expires at the end of the month, includes a nightly curfew from 10 p.m. until 5 a.m.

Cooper says, in the next EO, they're CONSIDERING loosening stay-at-home order, occupancy limitations, gathering limits, including the restrictions on attendance at school sports games. @wcnc

Cooper said nothing has been decided and made it clear state health leaders will consult with other states to learn what has and hasn't worked from different reopening policies.

The governor, however, said all restrictions were on the table to change, including gathering limits, occupancy restrictions, and the curfew. Cooper stated the current cap on attendance of school sporting events could also ease in the new order.

Earlier in the day, the Department of Health and Human Services announced Thursday that shipments of COVID-19 vaccines have been delayed by severe weather across the United States.

According to DHHS, the federal government contacted the state to notify them of delays impacting the delivery of first and second doses from hubs in Memphis, Tennessee, and Louisville, Kentucky. State health officials are working with the Centers for Disease Control and Prevention (CDC) to minimize the potential effects of the delays. Several providers in Charlotte and the surrounding area began rescheduling appointments this week due to limited supplies and inclement weather.

"This is frustrating for all of us," Cooper said. "We're pushing for more vaccines for our state."

Cooper said so far, North Carolina has administered over 2 million doses and they're seeing improvements with the rollout.

RELATED: Is the winter weather affecting your vaccine appointment?

As of Thursday morning, DHHS said Moderna vaccines have not been shipped and only a limited number of Pfizer vaccines were shipped. Both suppliers are experiencing a backlog of orders due to the weather.

A vaccine clinic at the Gastonia Farmer's Market was pushed back to Feb. 26 due to the weather.

“We want to get this done as soon as possible. We don't have a great idea yet as to when we're going to get that vaccine shipment in, we made the decision to go with next Friday because we don't want to have to reschedule people twice,” Adam Gaub, public information officer for the county, said.

The U.S. is vaccinating an average of 1.7 million Americans per day against COVID-19, up from under 1 million a month ago. New figures from the White House show a steady increase in the pace of vaccinations over President Joe Biden’s first month in office.