'This isn't just about Lisa': Supporters take fight to Biogen HQ for access to new drug

People supporting Lisa Stockman-Mauriello marched to Biogen's HQ to make their voices heard to persuade them to let her have a drug she needs to live longer. 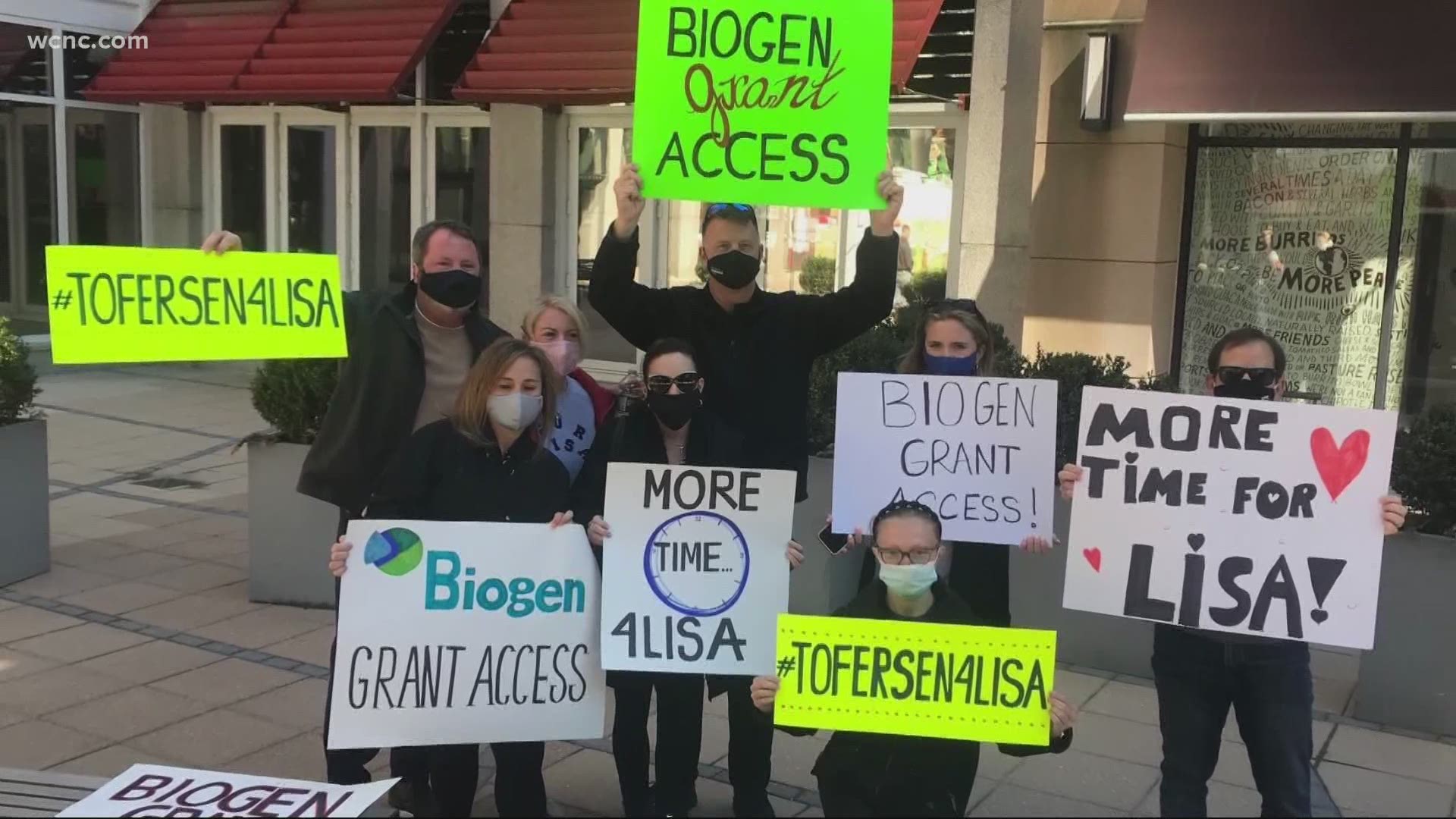 CHARLOTTE, N.C. — Lisa Stockman-Mauriello is the mom to three teenage boys and the wife to her loving husband, Bob. But she's also in the fight for her life, and begging the drug company Biogen to give her access to a non-FDA-approved drug that her doctor says will likely extend her life against a rare form of ALS.

“Moms aren’t supposed to be sick," Lisa Stockman-Mauriello said in a soft voice.

“Moms aren’t supposed to be sick” added Bob Mauriello, her husband and voice.

Lisa is sick, very sick, and Bob is slowly becoming her voice. Lisa was diagnosed with Bulbar ALS, a very rare kind of ALS that progresses rapidly because of mutation of the SOD1 gene. It’s quickly robbing Lisa of the ability to speak, the ability to move, and soon, the ability to live.

It is in a word, it’s heartbreaking.

On Tuesday, LIsa's support network is making their voices heard outside of Biogen's headquarters in Massachusetts. With signs and their voices, they want the company to know they're fighting for Lisa and everyone else who needs this new drug to live longer.

“This isn’t just about Lisa, it’s about getting people like her, with ALS, access to these drugs” said Kirsten Wolberg, Lisa's friend.

Lisa needs this drug called Tofersen, but Biogen, who is making it, is under no obligation to give it to her and others outside the clinical trial despite the 2018 “Right to Try Act” passed in congress. It says patients can request these types of non-FDA approved drugs, but they do not have the right to them unless the drug maker signs off on it. In short, Lisa wants more time.

"Long enough to see our sons graduate in the spring," Lisa told WCNC Charlotte's Bill McGinty. "One from college, one from high school and one from the eighth grade."

It's what any mom would want.

Lisa’s physician, Dr. Neil Shneider, a neurologist and director of the Eleanor and Lou Gehrig ALS Center at Columbia University, says this drug may indeed help her.

“I think there is evidence to suggest that this therapeutic would be helpful to her, and you know, in ALS, we don’t have a lot of therapeutic options, we are very limited as to what we can offer our patients, so I feel this is her best chance, for a therapeutic that could make a meaningful difference in her disease” said Dr. Shneider.

RELATED: A mother's fight to live longer: Why did the drug company say no?

This is where things get complicated and emotional. Biogen is the innovator of Tofersen, a drug that could help Lisa and others like her live longer.

“It’s in phase 3 clinical trials, we’d be happy for Lisa to participate in the trial, but it closed at the end of the year, just weeks before she was diagnosed” said Bob.

Despite the red tape, Lisa, Bob, and her family officially petitioned Biogen asking for this drug, so has  Dr. Shneider, and so have tens of thousands of supporters who signed a petition asking Biogen to let her have Tofersen under compassionate use.

But the answer came in early March in a letter to Lisa and it said no, Biogen denied Lisa’s request.

“Let me begin by expressing my personal, and our team’s collective empathy upon learning of your ALS diagnosis. We can only imagine the magnitude of the devastation that you and your family must be experiencing. Since we learned of your request for early access to Tofersen, which is still being tested in a clinical study, we’ve rapidly brought together our medical, research, regulatory and senior leadership colleagues to thoroughly evaluate and challenge our own policies in light of the situation for you and other people with ALS. We have also been in touch with your physician since we received your request.

Obtaining approval for a new drug from regulatory authorities around the world is the fastest way to help the largest number of people with a specific disease and requires the completion of clinical testing. Until efficacy and safety are determined, we must act with the interests of all patients in mind. Providing individual access to Tofersen at this time could jeopardize access to Tofersen for hundreds of SOD1-ALS patients by impeding our ability to complete the study that will determine whether Tofersen is efficacious and safe and to seek subsequent regulatory approvals as quickly as possible.

RELATED: When is it okay to cut the COVID-19 vaccine line?

Our study has completed enrollment and data results are expected in the second half of this year. I want to assure you that we are working as fast as we can. We are preparing to open an Early Access Program soon after there are no more patients in our study who are on placebo and Tofersen has shown sufficient efficacy and safety to represent a positive benefit-risk for ALS patients” wrote DR. Maha Radhakrishnan, MD, the Chief Medical Officer, Biogen.

Biogen said in a second statement to WCNC  from Alfred Sandrock, EVP Research & Development about ALS investigational therapy, “I want to extend my deepest gratitude to the many of you who have expressed to me and others at Biogen your concern for people living with ALS. Their experiences have touched all of us at Biogen and reinforced our commitment to finding effective and safe therapies to treat this terrible disease.

Biogen has been working to find effective therapies for ALS for more than a decade. Unfortunately, this has been a difficult and often disappointingly unsuccessful path. In the past, we have had great hope for therapies that seemed very promising in early studies, only to find in later studies they provided no benefit or posed unjustified risk to patients. This is why even when a drug shows early promise, it is essential to conduct confirmatory studies.

In the case of tofersen, a well-controlled study is the fastest and most certain way to establish the benefit-risk profile and ultimately ensure access for SOD1-ALS patients around the world. At this point, our ongoing study includes people living with SOD1-ALS, all of whom are affected by rapidly progressing forms of the disease. Only some of these patients are receiving tofersen, while others are receiving placebo. These patients agreed to participate in our study acknowledging the risk that they may not receive tofersen, and with hope that tofersen could be shown to work and be approved for all patients. Our research and the hope of developing an effective and safe therapy would not be possible without the commitment of these brave study participants, to whom we are extremely grateful.

We cannot overlook these patients when considering questions of broader access, and cannot keep them on placebo while at the same time offering tofersen to those outside of our study. Offering tofersen outside of the study would risk failing to complete the study and risk failing to obtain access for all SOD1-ALS patients. Decisions such as these are among the most difficult and challenging, we face as a company. To ensure that we are considering all aspects, we have consulted with several ethicists to help us grapple with the difficult tension that arises when access for some patients today could risk access for all future patients. While they too acknowledge the impossibility of an outcome satisfactory to everyone, our collective conclusion is that early access to tofersen should only be provided after study participants are no longer randomized to placebo.

We remain hopeful that when the tofersen study reads out later this year, it will be positive. There is more information on our website about the ongoing tofersen clinical trial. If the study data show tofersen to have a favorable benefit-risk profile, and we do not require further controlled clinical trials, we will immediately open an Early Access Program for individuals with SOD1-ALS.

We take the responsibility that we have to ALS patients around the world very seriously. We carefully consider the needs of all patients when making these decisions. We look forward to advancing our work so that someday these hard choices may no longer be necessary.

Thank you for your support and compassion for people living with ALS.

Lisa, who works in health care, will continue to fight every day, and love her family every minute she has, that much, she can control.