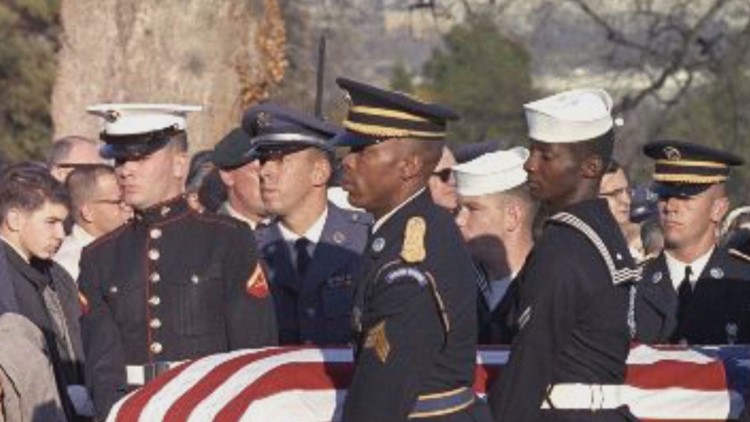 COLUMBIA, S.C. — On a Friday 56 years ago, President John F. Kennedy was shot and killed in Dallas, Texas.

Retired Army Sergeant and Sumter native Jim Felder had a front seat to history as he performed pallbearing duties for Kennedy's funeral.

“Walked out of the apartment and there were these ladies gathered around a taxi, crying. Nosy me, I went over and said, 'What's going on?' The old cab driver, very cold, very stoic, they just shot Kennedy. 'What do you mean they shot Kennedy? He's in Dallas today.' 'Yeah, I know, that's where they got him,” Felder remembers.

After driving around in his car, waiting for an update, Felder said he learned President Kennedy had died.

“I went home to my apartment, walked in the door, saw the phone was ringing. First Sergeant, he says 'Sgt. Felder you heard what happened to the President?' 'Yes.' 'Well your leave has been cancelled. You need to get out here to Ft. Myer, get your team together, you got to get to Dallas and pick up the President's body,” Felder said.

Felder, an Army Sergeant with the 3rd U.S. Infantry, known as the “Old Guard,” never made it to Dallas. Washington D.C. traffic and soon-to-be President Lyndon Johnson, whom departed for Dallas quickly, combined to leave the group behind.

But, Felder’s team was waiting when Air Force One landed with Kennedy’s remains.

“I witnessed the autopsy, I witnessed the embalming, because we had to provide security because you had press everywhere. We literally threw two Washington Post reporters out of the room,” Felder said.

Felder remembers other moments too, like when top Kennedy aides had to go buy a new casket because the original’s handle broke. And, he remembers the First Lady’s private moments with Kennedy’s remains and casket.

Felder and seven other men were pallbearers for Kennedy and laid him to rest at Arlington National Cemetery. The retired sergeant said he had to job to do and the world was watching, so that meant no tears.

RELATED: Trump to allow release of thousands of JFK files by National Archives

“At that point I had done oh gosh almost 1,800 funerals, so it was just a job then. It didn't hit me until a couple days later, it was all over, that I sat down and realized I had buried John F Kennedy, my hero as a politician, as a president. And I just cried,” Felder said.

Felder said 1963 was a rough year for the country after increasing tensions and violence over Civil Rights and then culminating in Kennedy's assassination.

He still stays in contact with his fellow pallbearers. Seven of the team are living, including Felder. They get together every two years to reminisce and toast Kennedy. Besides then, Felder says they check in for birthdays, family milestones, and other such events.

But 56 years after the assassination, Felder told WLTX the memories of those November days are “seared” in his head.

“I guess the one that really got me was John John. He was only 3 years old, and it was his birthday the day of the burial. And we brought the body out of St. Matthew's Cathedral and he stood on the steps and he did that salute. That just jerked all kind of emotions out of me,” Felder reflected.