How far is too far: Do homeowner associations have too much power?

When we started exposing the seemingly unbridled power of homeowner and community associations, viewers sounded off. We received emails describing HOA's as "horrible and greedy."  Some accused their boards of conspiring to "violate the law and victimize homeowners."  One viewer in Kennesaw asked "how are volunteers allowed by our law to have such a tremendous amount of authority over someone's property?" 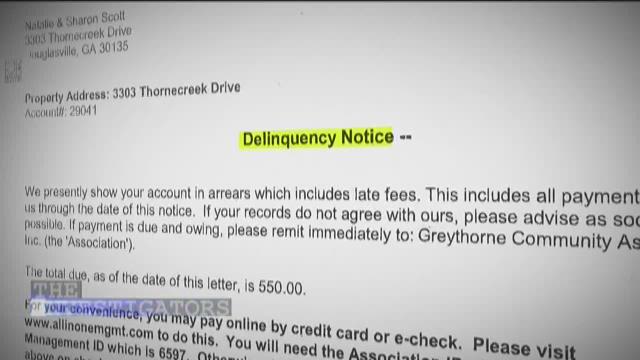 When we started exposing the seemingly unbridled power of homeowner and community associations, viewers sounded off. We received emails describing HOA’s as “horrible and greedy.” Some accused their boards of conspiring to “violate the law and victimize homeowners.” One viewer in Kennesaw asked “how are volunteers allowed by our law to have such a tremendous amount of authority over someone’s property?”

Investigator Rebecca Lindstrom found one neighborhood in Douglas County desperate to find a solution – and a voice for their frustration.

A constant theme here, and throughout metro Atlanta, are dues and the fines associated with paying them late.

Lindstrom talked with one homeowner who says she sent her dues by certified mail this year. She knows it arrived and she knows the check was cashed. Still, she received a letter in March claiming otherwise – and assessing her a $50 fee to boot.

“I want to know where my money went,” the woman said, asking not to be identified for fear of retaliation. She called the property management company newly hired to manage the HOA’s financial affairs. It took a few days but eventually she says she was able to talk with someone and get the matter cleared.

It's just one example of how a simple error can create panic when the community is divided and filled with mistrust.

But some say the woman should feel lucky. Other homeowners in the Greythorne subdivision say they have opened their mail to find late fees that would make even the greediest lender proud. One homeowner told Lindstrom he received a bill for $800 after being late one month on his $325 dues.

Within two months, she says there was a lien on her house and she was being charged nearly $900 – more than half of that, fees for court, attorney and collection costs, despite paying her dues regularly, on time for more than a decade.

“It’s a repeat of the same story and we’re noticing that it’s a trend,” said Adams.

Adams and the board disagree on who did what, wrong – but it’s now up to the court to decide since both have filed lawsuits not only to dispute payment of the HOA dues, but also resolve accusations of perjury and defamation. The exchange has become so heated, Kevin Sanders, the HOA treasurer has won a protective order.

He and the rest of the board insist there has been no wrongdoing and that disgruntled homeowners simply have not followed the proper procedure to have their voices heard.

Sanders would not comment on questions raised about fees, board conduct or even explain why he won't step down from a thankless volunteer position, as some people have asked. But his attorney sent Lindstrom two emails pointing the blame at Adams for stirring the pot.

“These are people who are fed up and we’re not taking it anymore,” said Adams without apology.

Other claims have surfaced alleging mismanagement of the HOA’s funds and covenant.

Upset homeowners have tried to talk with the media, lawyers, the District Attorney, commissioners and congressmen. There’s even been an investigation by the sheriff’s department.

In a meeting with homeowners, investigators said there was questionable activity, but nothing that would warrant criminal charges. Homeowners want to see the bank records for themselves. After all – it is their money. They’ve been asking to see the statements for years, writing letters and open records requests with the board and HOA attorney. So far, their requests have been denied.

“You’re in the dark. I don’t feel like there’s transparency. I think its run by a dictator,” Ingram said.

Three times now homeowners have also signed petitions demanding board members step down. Each time the HOA attorney and board have found reasons to ignore them.

“It makes me sick to my gut,” said Reginald Davis who helped build many of the homes in the community.

The group wanted to vote on their budget but the board claimed the bylaws didn’t require them to hold one. The board explained that the budget was automatically approved, unless a majority of homeowners voted to disapproved it. Adams questioned how that was possible if the board didn't hold a vote?

And so it goes. The community over ruled and legally required to pay the increased dues now a part of the new budget.

Right now, state law gives all the power to the HOA board, to interpret covenants in ways that don’t always make sense to homeowners.

Senator Donzella James introduced legislation to better protect homeowners, but members of the House Judiciary committee refused to bring it up for a vote.

James says she knows of lobbying groups and agencies to represent contractors and HOA boards, but hasn’t found a single one willing to represent the homeowner.

James still hopes to get a study committee between sessions to see what can be done to make boards more accountable.

Lindstrom observed the Greythorne community for nearly five months, trying to weed through the accusations. She found a well-maintained, beautiful community with homeowners passionate to protect it. But how the rules were enforced and the lack of transparency behind decisions made seemed to fuel frustrations and make suspicion -- appear fact.

As tensions flared, communication seemed to get even worse. The question now, how to heal. A board's primary mission is to protect property values. But those who love their neighborhoods most seem to do so because they appreciate the sense of community it provides.

Earlier this year, the board decided to hire an outside management firm, but the service comes with a cost and with the same board members in place, some question if anything will really change - and what impact it will have on their dues next year.