Activist: 'I guess if you’re a rapist, come on to Georgia because we’re not prosecuting folks here' 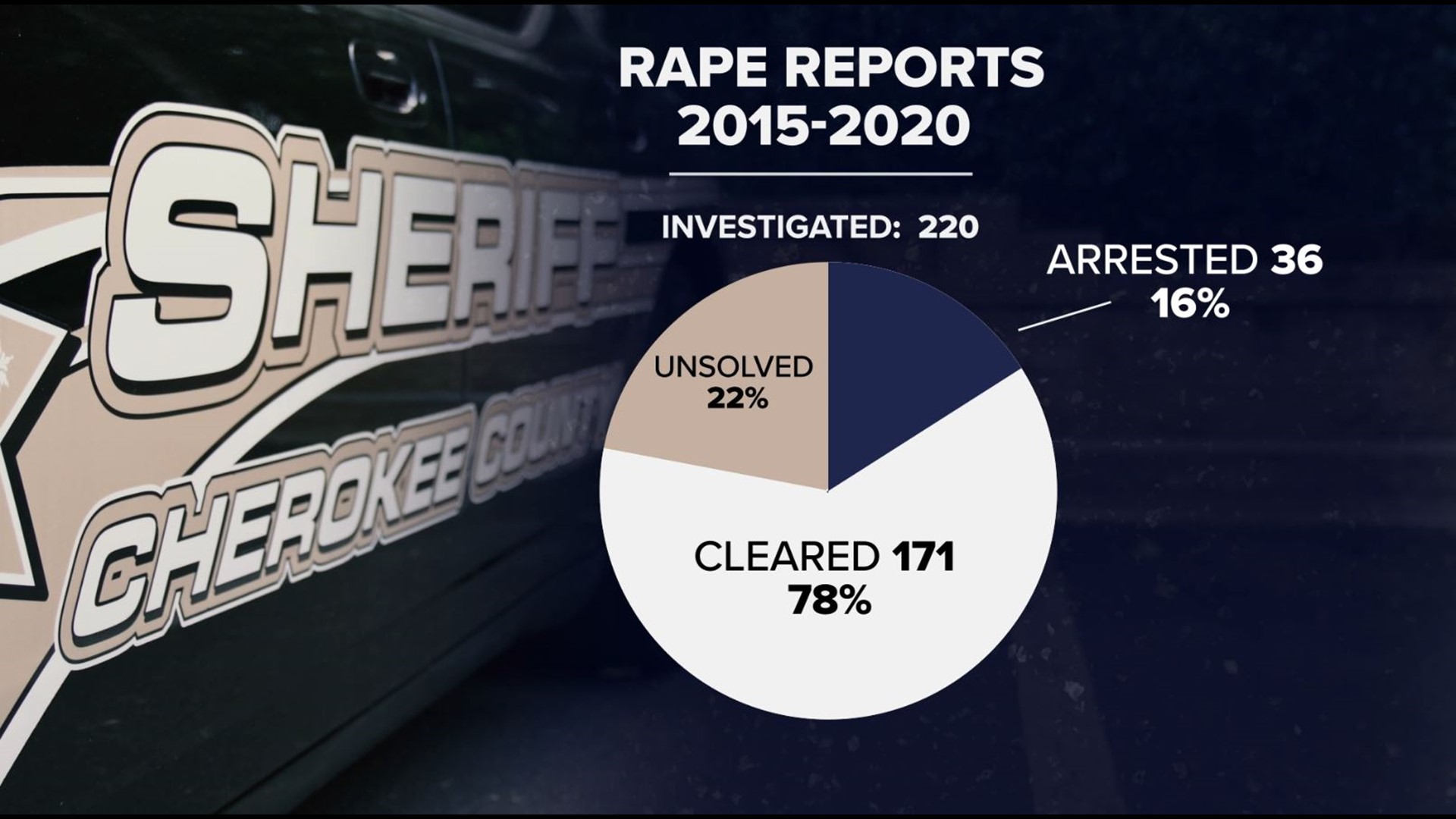 CHEROKEE COUNTY, Ga. — Television crime dramas can make solving a rape case look so simple.  A suspect gets arrested, goes to court, and ends up in prison. If only real life were that simple.

“I thought it was going to be quick. Especially with video evidence and seeing his face and knowing it’s my body,” said a woman who reported her alleged rape to Cherokee County Sheriff’s Office six years ago and has seen no results.

The woman, whose identity we’re protecting, even provided detectives with graphic videos showing her alleged rape. Still, detectives never even questioned the man. The sheriff’s office told 11Alive’s investigative team, The Reveal, it doesn’t have enough evidence to make an arrest.

“I would say either 50 to 75% are not taking a survivor seriously,” Jennifer Bivins, president and CEO of the Georgia Network to End Sexual Assault, said about police.

Bivins said while as much as 98% rape reports are legitimate, a small fraction ever result in an arrest.

Our investigation took a closer look at rape reports in Cherokee County and other police departments across metro Atlanta. Here’s what we found.

From 2015 to 2020, the Cherokee County Sheriff’s Office investigated 220 rapes. It cleared, or solved, 176 of them. That’s a 78% clearance rate. It sounds good, but it’s misleading. The Reveal uncovered the department only arrested 36 suspects. That’s 16%. A majority of the cases, 39% of them were ruled “unfounded.” Another 20% were closed citing something called “exceptional clearance.”

“It kind of gives a false illusion that we’re doing a better job of solving these cases than we really are,” said Thaddeus Johnson, a criminology professor at Georgia State University and a former Memphis Police Officer.

Johnson said exceptional clearance is meant to close a case when circumstances beyond an officer’s control prevent the arrest of a known suspect. For example, if the suspect has died, left the country, or is already in custody for another crime in another jurisdiction.

“In policing, in police leadership, what we care about are numbers. So, we care about public safety, don’t get me wrong, but at that level it’s about numbers because funding goes along with it, credibility goes along with it,” Johnson explained. “Exceptional clearance allows prosecutors and departments to be able to satisfy those statistical, or, those numbers without being held accountable to follow all the way through with the investigation.”

Johnson said it should be a rare tool for police, but it’s not.

In Cherokee County’s case, it’s clearing more rape cases with exceptional clearances than arrests. That means more often than not, people who are suspects in a rape case are walking free.

Cobb County police exceptionally cleared 28% of all its rape cases. Their arrest rate was 16%.

Forsyth had the lowest number of exceptional clearances, only two over a four-year period. But out of 70 rape cases, it says 48 are unsolved and inactive.

“I guess if you’re a rapist, come on to Georgia because we’re not prosecuting folks here is what that says to me, and that is scary for our community,” Bivins said.

We asked these departments for the reasons these known suspects were never arrested or charged. Cherokee County was the only one that provided data for us. It said the reason behind most of its exceptionally cleared rape cases was the victim "wouldn’t cooperate."

“We shouldn’t make that the scapegoat for reasons why we use exceptional clearance,” Johnson said.

The other departments couldn’t tell us why they’re exceptionally clearing rapes, because they’re not keeping track.

“That should be tracked. There should be clear statements as to why they’re making these recommendations especially if their decision is not to move forward with the case,” Representative Scott Holcomb of Atlanta said.

Rep. Holcomb sponsored the Sexual Assault Reform Act of 2021, a law he said is supposed to do more for survivors by tracking rape kits and making sure police departments are following through with investigations. But he says full justice for rape survivors is still a ways away.

“We have to start prosecuting more cases and getting more convictions,” he said. “From my perspective the rates of prosecution are too low. That’s true across the country and that’s true here in Georgia.”

Six years after she filed a rape report, the woman we spoke to isn’t sure the man seen on camera allegedly assaulting her will ever see the inside of a courtroom. But she hopes her case avoids becoming yet another exception.

The Reveal also requested exceptional clearance data from DeKalb and Gwinnett police. Gwinnett PD said it didn’t have those records readily available and tracking them down would cost 11Alive $1,300.  DeKalb’s data was incomplete, and a spokesperson would not return our multiple calls and emails to clarify the information.

The Reveal is an investigative show exposing inequality, injustice, and ineptitude created by people in power throughout Georgia and across the country.

MORE FROM THE REVEAL:

'Not acceptable': Former Atlanta police chief says officer should have been off force before breaking man's ankle