A WCNC Charlotte Defenders investigation is looking into a hidden device targeting your credit card where you shop. 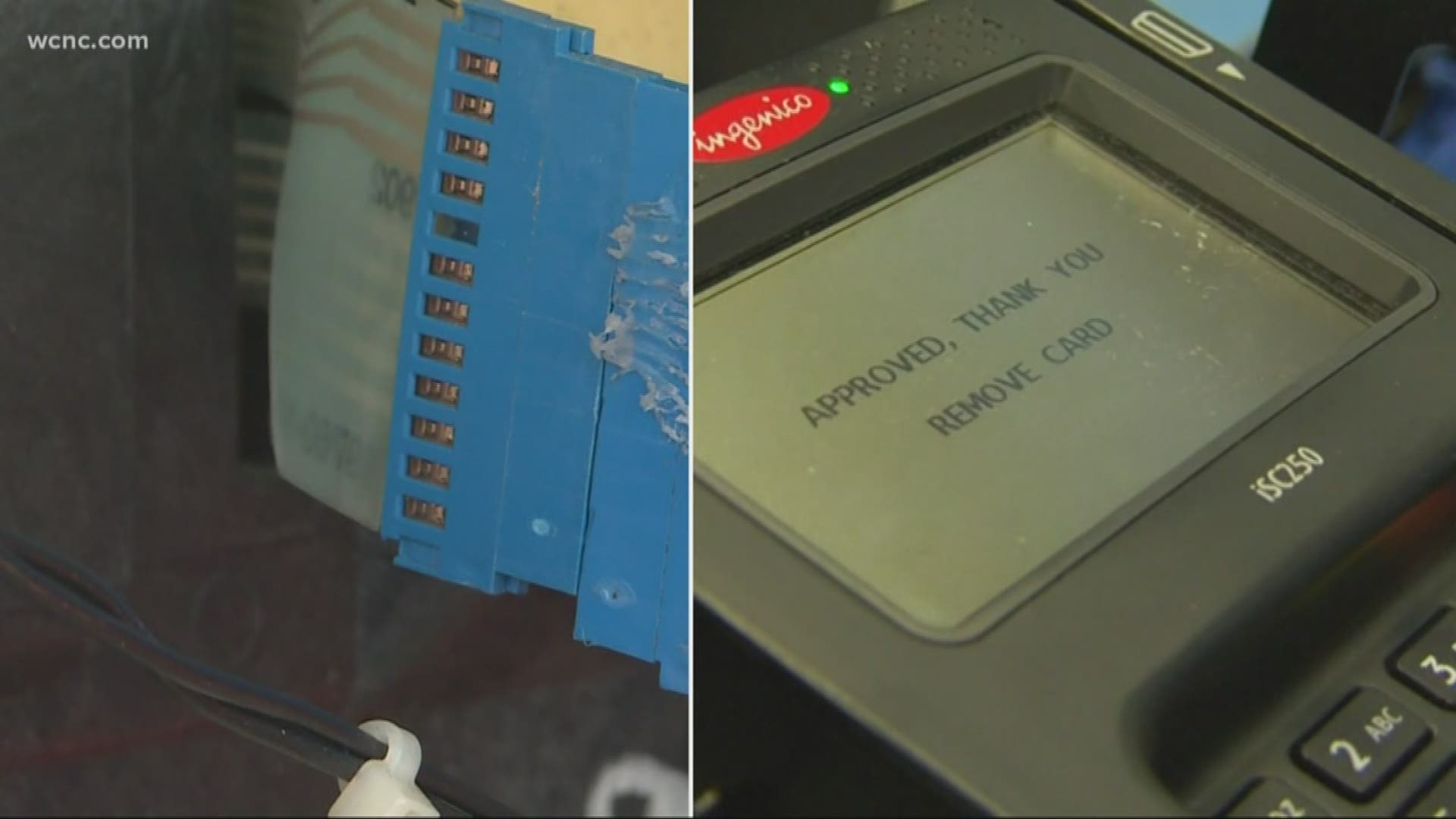 CHARLOTTE, N.C. — A WCNC Charlotte Defenders investigation is looking into a hidden device targeting your credit card where you shop.

You may have heard of gas station skimmers, but now WCNC Charlotte is learning of a similar device being found inside stores.  It’s a credit card skimmer placed on top of the point of sale terminal.  When you swipe your credit card, the device is collecting data from it.  Police say it’s possible many cases go unreported because the victims don’t know their cards are compromised.  Now, the Defenders team is looking at how you can protect yourself.

All it takes is seconds for criminals to install the device, and when you swipe your credit card, you won’t even know it’s there.

Surveillance video from inside an Aldi store in Pennsylvania shows someone installing the device right in front of the clerk without them knowing it’s happening.

“It’s very unsettling, especially when it’s a place you come all the time,” a shopper said outside the store.

“It’s pretty easy to distract somebody for two seconds,” says crime prevention officer, Johnathan Frisk with the Charlotte Mecklenburg Police Department. “We want to try to get ahead of these criminals.”

Officer Frisk says unlike skimmers at a gas pump, there’s no easy way to find the device at the point of sale terminal.

“Not many people are in there pulling on this face plate,” said Officer Frisk.

“You’re never going to know the skimmer is installed on the point of sale terminal,” says Matt Hayes, a special agent for the U.S. Secret Service.

Agent Hayes says there are less than five known cases of the skimmer being used in Charlotte over the past year, but the key word is “known."  WCNC Charlotte asked Agent Hayes if there could be many of the devices out in the Queen City right now that are just not known about.

“Absolutely,” Agent Hayes responded. “We don't know how many there are out there because it is very hard for consumers to find them.”

Here’s how it works.  The skimming device is simply placed over the real point of sale terminal.  When you swipe your debit or credit card, it starts collecting the data.

“You’re being charged for your purchase by the genuine point of sale terminal and the skimmer is also stealing your magnetic stripe information,” said Agent Hayes.

The information is downloaded into a memory card, which is used to clone your credit card, and then the criminals make purchases with the card.

Often by the time the Secret Service finds out, significant damage has been done.

“The major source is by bank investigators contacting us when they've been inundated with consumer phone calls saying they've got unauthorized charges,” says Agent Hayes.

Officer Frisk says there’s a simple step stores can take to block the device.  He showed WCNC Charlotte an example from Dunkin Donuts, where a small piece of foam is raised above the rest of the point of sale terminal.  Officer Frisk says that foam blocks the skimmer device.

“That’s a good way to protect us,” says Officer Frisk.

In the meantime, law enforcement urges you to frequently monitor credit card statements and bank accounts.

The Secret Service tells WCNC Charlotte the device is typically used at grocery stores in other parts of the country, but in Charlotte it’s usually found inside gas stations.

RELATED: Babysitter pleads guilty to child abuse, mom says goal is to 'stop her from being a nanny again'

RELATED: 'He touched something that definitely wasn't his' | Woman says doctor touched her inappropriately during exam

RELATED: Babysitter caught on camera won't be charged with crime