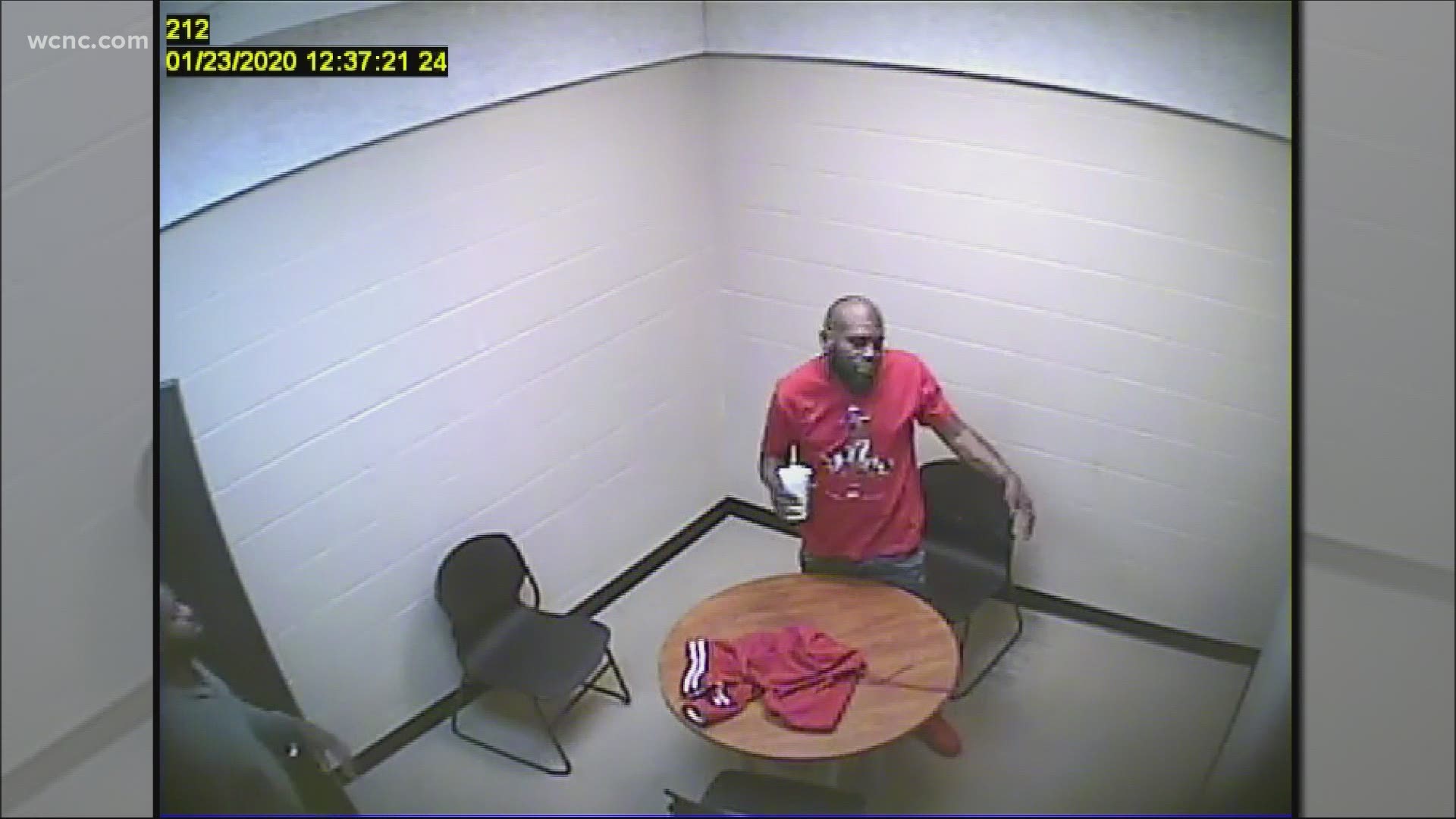 CHARLOTTE, N.C. — The Charlotte-Mecklenburg Police Department released videos Thursday showing the arrest and detainment of Harold Easter, who was arrested on suspect drug possession and suffers a seizure while alone in police custody.

An internal investigation found the four officers, and one sergeant, involved in Easter's arrest, knew he had ingested cocaine but failed to get him proper medical care.

Thursday's videos are the first time the public is seeing and hearing Easter's repeated requests and cries for medical attention. Easter died three days later in the hospital

One video shows Easter alone in a police interview room for more than 35 minutes.  He is seen pacing, shouting and rambling. About 42 minutes into the video, Easter begins to shake, holds onto the table and begins to shout for help. The internal investigation found he was clearly in need of medical help.

"He was calling out for help. Acknowledging the peril he is in and then just repeating 'I'm gonna die, I'm gonna die," said the attorney for Easter's family,  Alex Heroy, who viewed the tapes prior their release to the public.

Other videos show activity in the hallway outside the interview room. A few officers can be seen going about their day at the Charlotte-Mecklenburg Police Department Metro Division building on Beatties Ford Road. No one enters the room to check on Easter until minutes after he has already collapsed.

CMPD also released videos of Easter's arrest and his transport to the police precinct.  In the videos leading up to Easter's arrest, officers are seen following Easter's vehicle for several minutes before Easter pulls over the black SUV he was driving.

"Don't eat it. He's eating coke," an officer is heard saying as they approach Easter in a black SUV and try to get him to get out of the vehicle.

After placing Easter in handcuffs, one officer's body camera shows him picking up what appears to be an empty plastic baggie.

As officers search Easter's car they can be heard talking about how he had tried to "crush up part of his crack."  Police found evidence of drugs in the vehicle and on the ground around the vehicle that officers say he tried to throw out.

In a body camera from an officer assisting in the arrest, officers can be heard asking Easter to open his mouth.

"He's got crack all over his tongue,"  said one officer. Another says, "Yeah, he was trying to eat it."

In a video that includes Easter's transport to jail, he can be heard asking officers for water and acknowledging that he "swallowed something."

“You talking about because I swallowed something. He ain't gonna give me no water. He’s supposed to give me water and use the bathroom.”

The WCNC Charlotte team is still reviewing the hours videos and will be uploading additional videos throughout the afternoon as our journalists review them.

Speaking during a press conference Thursday, CMPD Police Chief Johnny Jennings said two policies were violated on the day of Easter's arrest.  Per CMPD policy, officers are to call medic immediately if they believe a suspect has ingested any type of narcotic.  Officers in Easter's case did not do that.

"We have a responsibility to give him a chance to survive," said Jennings.  He acknowledged that he was not sure whether or not Easter would have survived if given medical attention given what he ingested, but said officers should have gotten him medical help immediately.

The other policy Chief Jennings said officers violated the day of the arrest was leaving Easter alone in an interrogation room unsupervised for an extended period of time. The policy at the time of the arrest stated suspects should not be left alone for more than 15 minutes.  The policy has since been changed in the wake of Easter's death.  Suspects are now to be supervised the entire time they are in custody - either with video and audio surveillance or in person.

When asked where the officers involved were when Easter suffered a medical emergency, Chief Jennings said they were in various parts of the office.  A few were working on paperwork and one was filling out paperwork regarding evidence collected from Easter's vehicle.

The department says the release of the videos are an effort to be more transparent.  The release came just days after all four officers and one sergeant connected to Easter's death resigned from CMPD.

"The sergeant and the officers had intimate knowledge that Mr. Easter had ingested and swallowed cocaine during the traffic stop," CMPD Chief Johnny Jennings said in September. "Additionally, the internal investigation determined Mr. Easter was left unattended inside an interview room for more than 20 minutes. At that time, he was clearly in need of medical attention."

Easter's family's attorney, Alex Heroy, said the officers in the case are "trying to escape accountability," by resigning before a formal board hearing.

In a separate investigation, District Attorney Spencer Merriweather called the videos ‘extremely troubling’ to watch. His office declined to criminally charge any of the law enforcement officers. He said they had considered the charge of involuntary manslaughter but determined there was not proof beyond a reasonable doubt.

Merriweather said the charge would have hinged on whether Easter could have survived if the officers had gotten him medical attention.