The discovery comes as a coalition of Charlotte media outlets filed motions in court Friday, asking a judge to unseal confidential records from two past lawsuits. 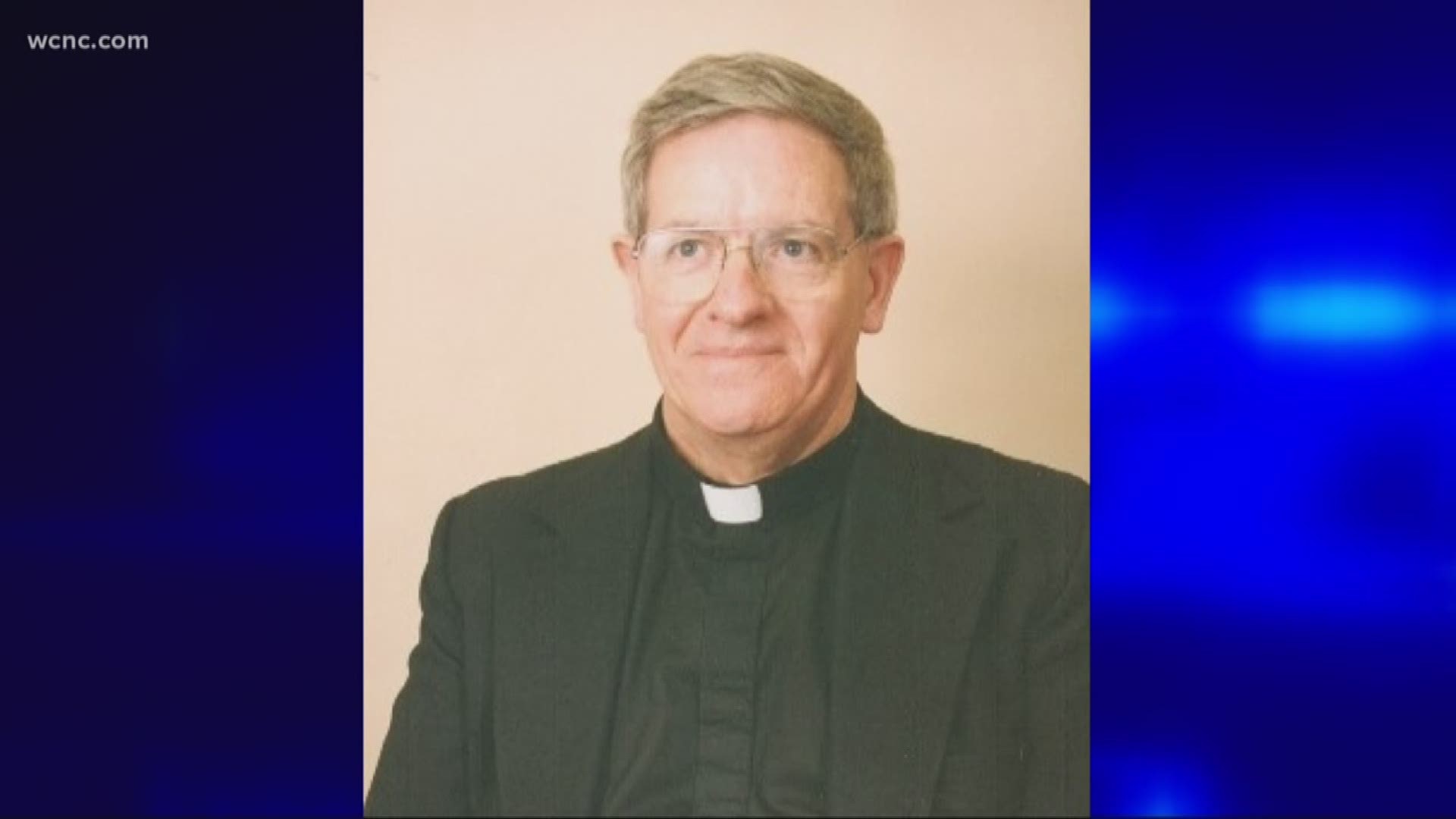 CHARLOTTE, N.C. — Newly obtained court records show the Diocese of Charlotte knew of sexual misconduct allegations against a priest 20 years before church leaders took formal action against him and even allowed him to work in a school in the years after the accusation.

Publicly available records previously marked "confidential" show a woman alerted the then bishop in 1987 that two of her brothers said they were victims of Father Joe Kelleher's sexual advances years prior while parishioners at Our Lady of the Annunciation Catholic Church in Albemarle.

"It has come to my attention that two of my brothers have been victims of one of your priest's sexual advances," she wrote on September 8, 1987, to Bishop John F. Donoghue. "The multiple episodes occurred years ago while our family were all parishioners at Annunciation in Albemarle, with Joe Kelleher."

"I have no proof other than my brothers' words; they would have no reason to lie as they are both fond of this man. My fervent wish is for you to intervene in seeking professional help for this priest, and ensuring that his work does not involve adolescent males. Again, I trust you will act on this in good judgment, and concern for both your priest and young males under his guidance," the letter continued.

The bishop responded by saying he was "deeply concerned about the matter" and indicated a desire to "thoroughly investigate this matter and take whatever action is appropriate."

"Although I have no reason to doubt what you tell me, I must consider the reputation and good name of the priest and give him every opportunity to explain or even deny the accusation," Bishop Donoghue said in a letter dated September 12, 1987. "It may become necessary for (the accuser) to make the accusation to Father Kelleher in my presence. I know this may be very difficult for (the accuser) and I certainly do not want to cause him any unnecessary concern. At the same time, I do not feel that I can simply accept the accusation without some proof. To the best of my knowledge, there has never been accusations of this nature made against Father Kelleher by others, nor any indications that he has a problem in this area. If, however, he is, indeed, guilty I would not want other young men to become involved with him."

The bishop ended the letter by asking the woman if she thought it'd be possible to convince her brother and mother to meet with him about the matter.

The Diocese of Charlotte said Monday the claims went unsubstantiated.

"As disclosed in public court filing nearly a decade ago, the Diocese of Charlotte is aware of an unsubstantiated claim from a third party in 1987 alleging possible sexual abuse by Father Joseph Kelleher," the diocese said in a statement. "At that time, the diocese attempted multiple times to contact the reported victims but they did not respond, and Father Kelleher denied the allegation. In 1987, the church had no formal guidelines for addressing unsubstantiated allegations of sexual abuse, so the case was closed."

"In addition, based on inquiry and to the best of my knowledge, I assure you that Father Kelleher has:  1. Never been suspended or otherwise canonically disciplined; 2. No criminal record, nor have criminal charges ever been brought against him, 3. Not exhibited any improper behavior, such as an untreated problem with substance abuse, violations of celibacy, physical abuse or financial impropriety; 4. Not had any substantiated problems involving sexual abuse, any history of sexual involvement with minors or others, or any other inappropriate sexual behavior; 5. No other particular mental or physical attribute, condition and or past situation which would adversely affect performance of his sacred ministry," he said on May 31, 2007.

Records showed by 2010, Father Kelleher admitted to inappropriate touching dating back to 1977. Stanly County arrested him and the diocese suspended him. A judge ultimately dismissed the case due to the older priest's mental health.

"I think each of these news organizations has independently determined that they have reason to believe that there is information in these sealed documents that would be of significant public interest," the coalition's attorney Jon Buchan said.

"For decades, the United States Supreme Court, our North Carolina appellate courts have held that in except for the most extraordinary circumstances court records should be public," Buchan said. "That's why the public will have confidence in how our courts operate. Our courts have held that time and again. So, anytime a court seals records, they have to meet a very high standard to demonstrate that it's necessary – that there's a compelling reason for it. In that, if they've sealed anything, it's the least possible sealing to protect whatever interest is necessary. In this case, for example, the news organizations are not seeking the names of these John Doe plaintiffs. They're not seeking information about their medical records. They're very clear about that."

The Diocese of Charlotte responded Monday, saying the only thing it filed under seal is information that would reveal the plaintiffs' identities, but said if the plaintiffs want the documents unsealed, the diocese supports that.

The Diocese of Charlotte is committed to transparency, accountability, and compassion for victims of sexual abuse, and has embraced the protections and reporting requirements spelled out in 2002 by the U.S. Conference of Catholic Bishops' Charter for the Protection of Children and Young People. We do not tolerate child sexual abuse, and the diocese acts swiftly to report allegations to authorities, cooperate with law enforcement, and discipline clergy found to have credible allegations against them.

Father Joseph Kelleher's case is a prime example: In 2010, when Bishop Peter Jugis first became aware of an abuse allegation against retired Father Kelleher, the diocese immediately suspended him from ministry and notified authorities as well as the public – resulting in widespread media coverage and a criminal charge.

RELATED: Diocese of Charlotte to release list of publicly accused priests by the end the year